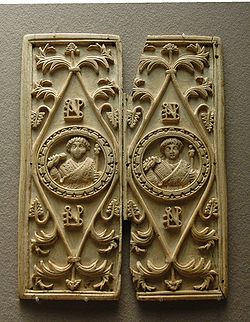 One of the consular diptychs of Areobindus Dagalaiphus Areobindus, consul in 506, showing him in a imago clipeata (Louvre)

In Late Antiquity a consular diptych was a particular type of diptych (a pair of linked panels, generally in ivory, wood or metal and decorated with rich sculpted decoration) which could function as a writing tablet but was also intended as a deluxe commemorative object, commissioned by a consul ordinarius and then distributed to reward those who had supported his candidature as rewards and to mark his entry to that post.

The chronology of such diptychs is clearly defined, with their beginnings marked by a decision by Theodosius I in 384 to reserve their use to consuls alone, except by an extraordinary Imperial dispensation, and their end marked by the consulship's disappearance under the reign of Justinian in 541. Even so, great aristocrats and Imperial civil-servants bypassed Theodosius's ban and produced diptychs to celebrate less important posts than the consulship – Quintus Aurelius Symmachus, for example, distributed some to commemorate his son's quaestorian then praetorian games in 393 and 401 respectively. 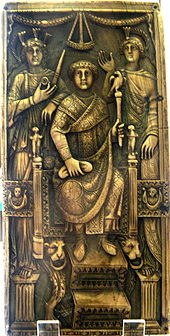 Consular diptych of Magnus), who was consul of Constantinople in 518. He sits between figures representing Rome and Constantinople. Louvre

The oldest diptych that can properly be called a consular diptych, held in the cathedral treasury at Aosta, is one commissioned by Anicius Petronius Probus, consul in the Western Empire in 406 – it is unique not only for its extreme antiquity but also as the only one to bear the portrait of the Emperor (Honorius in this instance, to whom the diptych is dedicated in an inscription full of humility, with Probus calling himself the emperor's "famulus" or slave) rather than that of the consul.

Later, consular diptychs systematically carried either a more or less elaborate portrait of the consul on the most richly decorated examples or a dedicatory inscription to him within a geometric and vegetal scheme on the simpler examples. The simpler examples were probably produced as a series from models prepared in advance, with the more sophisticated (and thus more expensive) diptychs reserved for the inner circle of the Roman aristocracy. The workshops responsible for their production were to be found in the Empire's two capitals at Rome and Constantinople, but the fall of the Western Empire in 476 was probably responsible for the disappearance of western production at the end of the 5th century, with all surviving consular diptychs of 6th century date originating from Constantinople. The most common motif on 6th century consular diptychs from Constantinople shows the consul, standing, presiding over the consular games which marked his entry to the consulship.

By their very nature consular diptychs are a valuable tool for the prosopography of the late Roman Empire as well as for the study of the art of this period. Large numbers of them have survived to the present day, in many cases due to their re-use as book covers for medieval ecclesiastical manuscripts. Some were also used in churches as grand bindings for lists of bishops and similar records.[1] The Barberini Ivory is a much rarer Imperial diptych, probably of Justinian.

In chronological order of production: