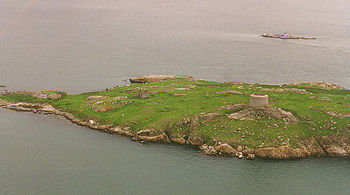 Dalkey Island (Irish: Deilginis meaning "thorny island") is an uninhabited island about 16 km (10 mi) south of Dublin, near the village of Dalkey, 3 km (2 mi) south of Dún Laoghaire harbour. Its name is a meld of the Irish deilg ("thorn") and the Old Norse øy ("island").

The island is now uninhabited by humans, but there are the remains of houses, a church and a Martello Tower. Located less than 300 metres offshore the island comprises 9 hectares (22 acres). From Bullock Harbour, it is possible to rent a boat to visit the island.[1], and also from Coliemore Harbour.

Dalkey Island, only 5 minutes by boat from Coliemore and Bulloch Harbours, is an important site of ancient and historic remains. Artefacts from the island, now housed in the National Museum in Dublin, are evidence that the original occupants were from the Mesolithic or Middle Stone Age. Settlers continued to use the site through the Iron Age and Early Christian period.

There is evidence it was inhabited in the 4th millennium BC (6,000 years ago) and was also used as a Viking base. There are ruins of another church, dating from the 7th century, named after St Begnet. This was altered on the east side when builders used it as living quarters while building the nearby Martello tower and gun battery in 1804. An older wooden church was probably here before the present stone one was built.[2]

A promontory fort was located at the northern end of the island, its presence still visible today in the form of a ditch. A herd of goats, originally put there in the early 19th century, remains there today but they are replacements of the original goats which were removed.

Dalkey Island, with Sorrento Point to the left, The Muglins to the right. Howth peninsula is in the background

The ruined stone church was built in the 9th/10th century and was probably abandoned when the Vikings used the island as a base to form part of the busiest port in the country at that time. In the early 19th century the British Admiralty erected the Martello Tower, one of eight dotted along the Dun Laoghaire coastline, as an early warning defensive device against the one time threat of invasion during the Napoleonic Wars.

The island is also an ideal spot for fishing, with Pollock, Coalfish, Wrasse and Mackerel being caught.

The channel between the island and the mainland is very deep and was once considered as a location for an oil terminal. However, the local area is very residential, and it was decided that the terminal should go elsewhere.

The waters around Dalkey Island are much used for sailing, angling and diving. Rocks known as Maiden or Carraig Rock, Clare Rock and Lamb Island all to the northwest form part of the ridge of the Island. Parts of these rocks are only visible at low tide. The southern end of the Island is a favorite with kayakers especially on the flooding tide. There can be a substantial overfall here and in a south east wind can be extremely challenging for the kayaker. When kayaking around the Island on a flood tide it is easier to go in an anti clockwise direction.

Dalkey Island is home to a colony of seals which has greatly expanded in recent years. A herd of wild goats live on the island also. Birdwatch Ireland have established a colony of Roseate Terns on Maiden Rock just north of the Island. More recently a pod of three bottlenose dolphins has begun frequenting the waters around Dalkey Island.

The Rocks to the east of the Island are known as "The Muglins" and are a different group or chain. These form a danger to shipping and have been fitted with a distinctive beacon.