Institution of the Counsellors

Institution of the Counsellors 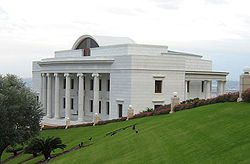 The Seat of the International Teaching Centre.

The primary responsibilities of the Institution of the Counsellors are the protection and propagation of the Bahá'í Faith in all parts of the world. Each Auxiliary Board Member is assigned to either protection or propagation.

There are currently 81 Counsellors, and they are appointed for a renewable five-year term which starts on the Bahá'í Holy Day, the Day of the Covenant, 26 November.

With the eventual passing of the individual Hands of the Cause appointed by Shoghi Effendi and without a Guardian to appoint additional Hands, the Universal House of Justice saw the need for developing an institution for the purpose of performing the Hands’ function of protection and propagation of the Faith. In 1968 the Continental Board of Counselors was formed. Their duties were:

In 1973, the International Teaching Centre was formed, which leads the work and actitivies of the Continental Counsellors.