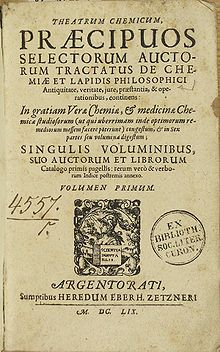 Page One of Theatrum Chemicum Volume I. Published 1602, Oberursel by Lazarus Zetzner.

All volumes of the work, with exception of the last two volumes, were published by Lazarus Zetzner in Oberursel and Strasbourg, France. The final two volumes were published posthumously by Zetzner's heirs, who continued to use his name for publication purposes.[4]

The volumes are in actuality a collection of previously published and unpublished alchemical treatises, essays, poems, notes, and writings from various sources, some of which are attributed to known writers and others remain anonymous. Despite Zetzner acting primarily as publisher and editor, many of the contents are not believed to have been written by him. However, because the Theatrum Chemicum was more widely disseminated in comparison to most alchemical texts of the era, and its text was in the universal Latin used by most scholars of the time, Zetzner is often cited as the author of many early alchemical texts which he in fact did not compose.

Theatrum Chemicum developed as an evolution of previous alchemical printing projects dating back as early as 1475, when a handful of writings believed to have been written by Geber (or pseudo-Geber) were printed with attached alchemical poems and circulated in the area of Venice, and then a decade later in Rome.[1]

A more directly related ancestor of Theatrum Chemicum was a publication by Johannes Petreius entitled "De Alchemia", a work which contained ten alchemical tracts, which was published in Nuremberg in 1541. Petreius had been collecting alchemical documents with the intention of publishing a more complete compilation, though he never completed this task. Upon Petreius's death his collection came into the possession of his relative, Heinrich Petri of Basel who published it in cooperation with Pietro Perna in 1561. By this time the collection had accrued a total of 53 texts and was published under the name, Verae alchemiae artisque metallicae, citra aenigmata, doctrina. Though Petri would continue to publish alchemical works, it was his partner Perna who in 1572 published an entire series of expanded publications totaling seven volumes with over 80 texts. Perna intended to include the collection of his son-in-law, Konrad Waldkirch, in an even larger multi-volume series, but instead sold the collection to Lazarus Zetzner. Zetzner would publish the newly acquired 80 texts and those of Waldkirch as the first volumes of Theatrum Chemicum. Over the course of the six volumes of Theatrum Chemicum, Zetzner expanded the collection to include over 200 alchemical tracts.[1]

Lazurus Zetzner (L. Zetzneri) published the Theatrum Chemicum in unsystematic editions, instead he reprinted issues of previous volumes that had appeared up to the date of the particular volume of Theatrum Chemicum as it was published.[4]

The material is diverse, being intended as a single body of work containing all significant alchemical texts of its time. Though the Theatrum Chemicum is a book about alchemy, by its contemporary standards it represented a body of work that, in a modern context, is similar to texts such as The Handbook of Chemistry & Physics, The Physicians' Desk Reference, or other specialized texts for the practice and study of the sciences and philosophy, including medicine. The physician and philosopher Sir Thomas Browne possessed a copy, while Isaac Newton filled the margins of his copy with annotations.

Within the various volumes are found some of the most studied works in the field of alchemy, such as Turba Philosophorum, Arcanum Philosophorum, Cabala Chemica, De Ovo Philosophorum, many tracts focused upon Secretum Secretorum, The Philosopher's Stone, the Elixir of Life, the Tabula Smaragdina, and several works attributed to Albertus Magnus and Thomas Aquinas.[5] The original publication dates of the specific writings found in the Theatrum Chemicum range from just a few years prior to each volume's publication, to as far back as several centuries in some cases.

Establishing a precise table of contents for the various volumes of Theatrum Chemicum is an issue of debate amongst scholars. Because of the unstandardized nature of early publication practices and the reprinting of tracts from earlier editions, sometimes under their modified full "elenchus" titles, those studying the contents of Theatrum Chemicum often encounter discrepancies in format, tract title, page number, and in some cases even authorship. For example, it is not clear whether some tracts that appear anonymous are in fact uniquely authored, or intended to be attributed to the author of the preceding text.[1]

Some of the authorship proposed by Zetzner remains unverifiable due to the nature of publication, the various age of the works, and the practice of attributing authorship without modern methods of citation. Considering the esoteric nature of the subject matter, this was not uncommon at the time of Theatrum Chemicum's publication, but it does seem clear that Zetzner established the authorship of the various tracts according to his original source material.

Below is a list of the tracts found within Theatrum Chemicum, and their authors as established by Zetzner.[1] 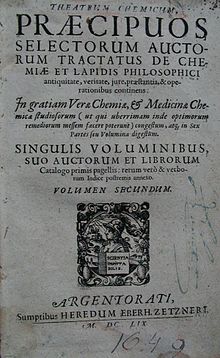 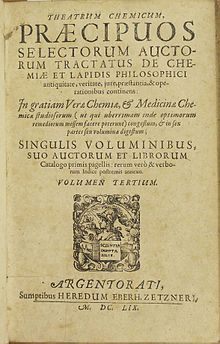 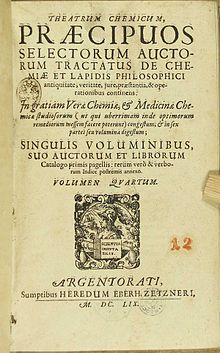 The fourth volume of Theatrum Chemicum was published in 1613 in Strasbourg. At the time of publication a reprinting of Volumes I-III was also issued. The reprinted editions are almost identical, though there are differences in details, such as page number, formatting, and minor rewording not affecting content. This often leads to differences in citations that use Theatrum Chemicum as a reference source. The single significant difference in the new editions is the inclusion of a tract in Volume 3 entitled "De magni lapidis sive benedicti compositione et operatione (Liber magiae generalis)" which is missing from the earlier editions.[1] With the additional tracts found in Volume IV, the total tracts grew to 143. 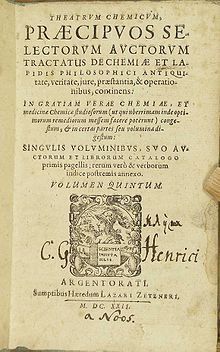 The fifth volume of Theatrum Chemicum was publish in 1622 in Strasbourg. This is the first of the volumes to be published by Zetzner's heirs, most likely Eberhardi Zetzner, though the text still bears Lazarus Zetzner's name. This volume contains a substantial number of "older" tracts, including one of the oldest alchemical tracts in existence, Turba Philosophorum. These additions would increase the number of tracts to 163. 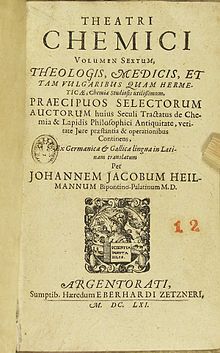 The final volume of Theatrum Chemicum was published in 1659-1661 in Strasbourg. Volume VI was published by Eberhardi Zetzner, though compiled by Johannes Jacobus Heilman. This volume contains tracts originally issued in German or French, but were translated by Heilman into Latin. These additional tracts would increase the total tracts to over 200.

Though Theatrum Chemicum remains the most comprehensive single body of work on alchemy, future publications would emulate Zetzner's attempt to gather alchemical works into a single reference source. In 1652, Elias Ashmole published a similarly entitled work by the name of, "Theatrum Chemicum Britannicum" in London. The two works are related by subject, but are different in content. However, because of the printing date of Ashmole's work and the similar titles, the two compendiums are often confused.

Then in 1702, Jean-Jacques Manget produced in Geneva the second most comprehensive collection of alchemical tracts in his "Bibliotheca Chemica Curiosa" which represents a total of almost 140 tracts, of which 35 had already been included in Theatrum Chemicum.

Another work, prepared by Friederich Roth-Scholtz, was entitled "Deutsches Theatrum Chemicum". It was published in Nuremberg 1728-1732, and like Ashmole's work, it is related to Theatrum Chemicum in subject, but of different content.