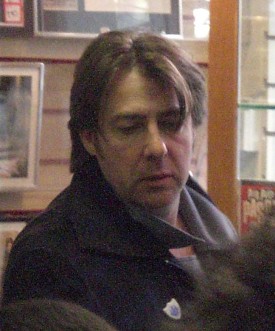 Ross is the son of British actress and radio presenter , grew up in

Ross is known for owning exotic pets. He is a big fan of , British , "", "" and comic books. Ross has even co-owned a comic shop in London with . He was also the visual inspiration for the main character in the comic book "Saviour". Ross is also greatly interested in Japan, presenting a BBC TV series on many different aspects of Japanese culture, , now in its third series.

He is a close friend of comedian and bought him a kitten after Gervais's previous cat, Colin, had died. The cat's name is Ollie and was presented to him on an episode of Ross's talk show "Friday Night with Jonathan Ross". ["Friday Night with Jonathan Ross", November 26, 2004] He was one of the special celebrity guests in the final episode of Gervais's second season of "Extras", in which Gervais's character, Andy Millman, and Ross were shown to be the best of friends after a fictional appearance on . [cite video|title = Extras - Series 2|medium = DVD|publisher = Universal Pictures Video|year = 2006]

Ross began his career as a researcher on the show "". After leaving this, he worked on various other shows before beginning another research job on "Soul Train", which became "Solid Soul". On that programme, he met fellow researcher , and the two devised what would prove to be a breakthrough hit for Ross in 1987, "The Last Resort with Jonathan Ross".

The pair based their concept on the successful American show "", and formed a new production company called , to produce a pilot. Ross was not originally slated as the show's host, but with little time to find one Jonathan Ross stepped in and made his television debut on the show in January 1987. [Jonathan Ross biography at the BBC's website. Visited January 6 2006. http://www.bbc.co.uk/radio2/shows/ross/biography_jonathan.shtml]

While the series was initially a co-production with Colin Calendar, ownership transferred to Marke and Ross, meaning that the latter retained a great deal of control as well as being presenter

A year later, his documentary series "The Incredibly Strange Film Show" introduced many to the works of cult film-makers like and .

In 1989, he co-presented the biennial BBC charity telethon "Comic Relief", the same year he launched "" a short lived chat show on Channel 4, most notable for the game show segment "" which introduced comedians such as , , and to television.

In 1991, he presented the annual "" on . He has presented the event each year since, and still does to this day. In 1992 he presented an interview with Madonna about her "Erotica" album and "Sex Book" promotion.

Ross has appeared in numerous television entertainment programmes on several channels throughout the 1990s and 2000s. He was a regular panellist on the sports quiz "They Think It's All Over", and hosted the "". Other projects include the BBC joke-quiz "Gagtag", the Channel 4 variety show "Saturday Zoo", new-acts showcase "The Big Big Talent Show", and the ITV programme "Fantastic Facts".

In 1995 he left Channel X, despite its profitable nature. He was quoted in a 1998 article as stating:

He took over presenting of the Film... programme in 1999, the BBC's long-running cinema review series, after left the show. Ross himself has made a number of cameo appearances in films, playing himself in the ' film "" (1997) and voicing the character of Doris in the UK version of "" (2004) ). He also played himself in "", presenting "Goldrush", a fictional television quiz on which the main character, Del-boy, was a contestant. In 2001 he voiced characters in two episodes of the animated comedy series "". In the episode of "Film 2006", Ross also claimed that he had appeared as an extra in the 1981 movie 'The Rise and Fall of Idi Amin', as an Israeli soldier raiding Entebbe airport.

He began presenting a Saturday morning show on in 1999, and he continues to do so. He has also presented radio shows for and (having previously worked on 's earlier venture, "Radio Radio"), as well as the now-defunct network service "", where his producer was Chris Evans.

On , Ross began presenting his chat show "". The show continues to be one of the most popular shows on the BBC.

In 2005, Ross anchored the BBC television coverage of the concerts. Later that year he was made an Officer of the in the Queen's Birthday Honours for services to broadcasting. He celebrated the news by playing "God Save the Queen" by (which was banned by the BBC when released in 1977) on his Saturday morning show. On , 2006 Ross was made a Fellow of , his alma mater.

In early 2006, Ross announced that after eight years he was quitting his regular panellist seat on the sport/comedy quiz show "They Think It's All Over", stating:

However, after Ross's departure, only two more episodes of the show were made before it was cancelled.

In January 2006 he presented "", broadcast on . The three-part documentary followed Ross as he explored the film industry in Japan, Hong Kong and Korea, interviewing directors and showcasing clips. His interest in Asian culture and his self confessed love for and video games led him to making three series of show "", as well as producing another series for the same channel called "", starring and Joe Cornish. He produced the latter programme through his own production company Hot Sauce.

Ross was the subject of controversy in June 2006 when Conservative party leader appeared on the show. Ross began a line of questioning relating to ex-Conservative culminating in the question: "Did you or did you not have a wank thinking of Margaret Thatcher?" Ross was defended by the publicly but repeat showings of the interview have been banned. ['BBC to ban repeats of Ross versus Cameron' "The Times", July 01, 2006 http://www.timesonline.co.uk/article/0,,2-2251285,00.html]

On , he performed at the for Queen Elizabeth II's 80th birthday and later in August 2006 Ross was enlisted to ask the first question since the transition from beta for the Yahoo Answers in UK and Ireland. The answer can be seen [http://uk.answers.yahoo.com/question/index?qid=20060903154205AAjiuWU here] . On , Ross hosted Comic Relief 2007 alongside and . On 2007 Ross presented at the concert.

Starting on 10 September 2007 he presented the BBC Four series "", about the . This forms the core of a Comics Britannia season, which also includes another documentary by Ross called "". [ [http://www.bbc.co.uk/bbcfour/comicsbritannia/ BBC profile for "Comics Britannia"] ]

In April 2006, Ross, along with other BBC personalities, had details of his fees leaked to the tabloid press. ['Radio 2 stars' salaries leaked', Julia Day, "The Guardian", Tuesday April 18, 2006 http://www.guardian.co.uk/uk_news/story/0,,1756028,00.html ] It was claimed at the time by a then unidentified BBC mole, that Ross earned £530,000 (equivalent to £10,000 per show) per year for hosting his Radio 2 show. ['BBC unmasks mole who leaked salary details of its biggest stars', Owen Gibson, "The Guardian", Wednesday May 17, 2006 http://www.guardian.co.uk/uk_news/story/0,,1776263,00.html ] This was a controversial revelation. For some, the BBC was abusing its dominant position over commercial rivals in paying popular personalities such high fees, and for others debasing its public service remit. While refusing to comment specifically on the leak in line with the BBC policy on the matter, Ross did hint during his radio show that the figure was exaggerated; in addition to this, any pay highlighted as being 'his' would actually be split between himself and his producer/co-presenter on the show, .

The following June, a bidding war was sparked between BBC and ITV for his services. Although ITV were unsuccessful in poaching Ross, it is believed that their bid was higher than the BBC during negotiations. Had the ITV move come off, it would have meant that the network would have poached two of chat's biggest names from the BBC with and Jonathan Ross. Ross became the highest paid television personality in Britain, when a new BBC contract secured his services until 2010, for a reported £18 million (£4.5 million/year). ['Ross to stay at the BBC', Ben Dowell, "The Guardian", Friday June 9, 2006 http://media.guardian.co.uk/broadcast/story/0,,1794076,00.html]

On 5 December 2007, Ross joked at the "" that his salary meant that he was "worth 1,000 BBC journalists". His quip came shortly after the BBC had announced plans for more than 2,000 jobs cuts, and was condemned as "obscene" by the general secretary of the . ['Jonathan Ross: I'm worth 1,000 BBC journalists', Colin Crummy, "Press Gazette", 6 December 2007 http://www.pressgazette.co.uk/story.asp?storycode=39651]

In 2006, Ross was criticised when he made a joke against , soon after she and announced they were to divorce. He branded Mills, who is known for having only one leg, a "fucking liar" and that he "wouldn't be surprised if we found out she's actually got two legs". [cite news|url=http://www.sofeminine.co.uk/w/star/n174407/news/Jonathan-Ross-blasts-Heather-Mills-McCartney.html|title=Jonathan Ross blasts Heather Mills McCartney|publisher=SoFeminine|date=]

In June 2008, Ross was criticised by TV and radio presenter for allegedly talking "too much about sex". In an interview with the , Hunniford stated "I do get a bit annoyed with some of the new chat shows. Take Jonathan Ross. I like his show but he uses his guests as a tool for his own humour, whereas Parky would try to learn about them ... If you have a major Hollywood star as a guest, you want to hear about them rather than just talking about sex all the time." [cite news|url=http://www.telegraph.co.uk/news/newstopics/celebritynews/2229666/Gloria-Hunniford-Jonathan-Ross-talks-too-much-about-sex.html|title=Gloria Hunniford: Jonathan Ross talks too much about sex|publisher=|date=]