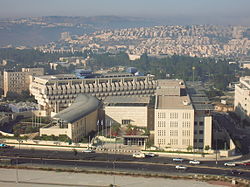 The Israeli Ministry of Foreign Affairs (Hebrew: משרד החוץ‎, Misrad HaHutz; Arabic: وزارة الخارجية‎) is one of the most important ministries in the Israeli government. The ministry's role is to implement Israel's foreign policy, and promote economic, cultural, and scientific relations with other countries.[1]

In the early months of 1948, when the government of the future State of Israel was being formed, the Ministry of Foreign Affairs was housed in a building in the abandoned Templer village of Sarona, on the outskirts of Tel Aviv. Moshe Sharett, formerly head of the Political Department of the Jewish Agency, was placed in charge of foreign relations.[2]

The new building of the Israeli Ministry of Foreign Affairs in Kiryat Ben-Gurion, the government complex near the Knesset, was designed by Jerusalem architects Kolker, Kolker and Epstein in association with Diamond, Donald, Schmidt & Co. of Toronto. The building consists of three wings: One houses the offices of the Foreign Minister and director-general, another houses the diplomatic corps and the library, and the third is used for receptions.[4] The outside walls of the reception hall incorporate onyx plates that diffuse an amber light. In June 2001, the design won the prize for excellence from the Royal Institute of Architects of Canada.[5] The building is described as a "sophisticated essay in the play between solid and void, mass and volume, and light and shadow."[6]