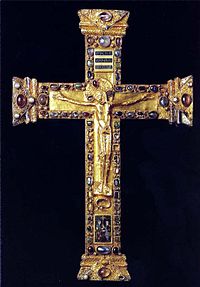 The Otto-Mathilda Cross is a masterpiece of Ottonian art.

In pre-romanesque Germany, the prevailing style was what has come to be known as Ottonian art. With Ottonian architecture, it is a key component of the Ottonian Renaissance (circa 951 – 1024) named for the emperors Otto I, Otto II, and Otto III. The style persisted past the Ottonian emperors, however, and into the reigns of the early Salians.

After the decline of the Carolingian Empire, the Holy Roman Empire was re-established under the Saxon Ottonian dynasty. From this emerged a renewed faith in the idea of Empire and a reformed Church, creating a period of heightened cultural and artistic fervor. It was in this atmosphere that masterpieces were created that fused the traditions from which Ottonian artists derived their inspiration: models of Late Antique, Carolingian, and Byzantine origin.

Much Ottonian art reflected the dynasty's desire to establish visually a link to the Christian rulers of Late Antiquity, such as Constantine, Theoderic, and Justinian as well as to their Carolingian predecessors, particularly Charlemagne. This goal was accomplished in various ways. For example, Ottonian ruler portraits typically include elements, such as province personifications, or representatives of the military and the Church flanking the emperor, with a lengthy imperial iconographical history. It is instructive to compare, for instance, the early Byzantine portrait of Justinian on the Barberini ivory with the portrait of Otto III in the Munich Gospels of Otto III (Bayerische Nationalbibl. clm. 4453). Also, the removal of spolia from Late Antique structures in Rome and Ravenna and their incorporation into Ottonian buildings was a popular device intended to remind the viewer of the patron's august imperial lineage. This was clearly the intention of Otto I when he removed columns, some of porphyry, and other building materials from the Palace of Theoderich in Ravenna and reused them in his new cathedral at Magdeburg. 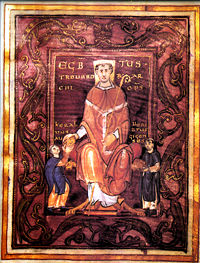 The dedicatory page of the Codex Egberti: it says "Egbertus" at top.

Ottonian monasteries produced some of the most magnificent medieval illuminated manuscripts. They were a major art form of the time, and monasteries received direct sponsorship from emperors and bishops, having the best in equipment and talent available. Among the greatest talents was the so-called Master of the Registrum Gregorii, or Gregory Master, who worked chiefly in Trier in the 970s and 980s. He was responsible for several miniatures in the influential Codex Egberti, a gospel lectionary made for Archbishop Egbert of Trier, probably in the 980s. However, the majority of the 51 images in this book, which represent the first extensive cycle of images depicting the events of Christ's life in a western European manuscript, were made by two monks from the island monastery of Reichenau in Lake Constance. Subsequently, the Reichenau scriptorium specialized in Gospel illustration in liturgical books, many of them, such as the Munich Gospels of Otto III (c. 1000) and the Pericope Book of Henry II (Munich, Bayerische Nationalbibl. clm. 4452, c. 1001–1024), imperial commissions. Other important monastic scriptoria that flourished during the Ottonian age include those at Corvey, Hildesheim, Regensburg, Echternach, and Cologne. In addition, much very fine small-scale sculpture in metals--usually embellished with gems, enamels, crystals, and cameos--and ivory were made during the Ottonian period.