The Ottonian Renaissance was a limited "renaissance" of economy and art in central and southern Europe that accompanied the reigns of the first three emperors of the Saxon Dynasty, all named Otto: Otto I (936–973), Otto II (973–983), and Otto III (983–1002), and which in large part depended upon their patronage. 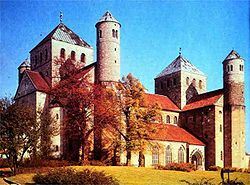 One of three medieval renaissances, the Ottonian Renaissance began after Otto's marriage to Adelaide (951) united the kingdoms of Italy and Germany and thus brought the West closer to Byzantium and furthered the cause of Christian (political) unity with his imperial coronation in 963. The period is sometimes extended to cover the reign of Henry II as well, and, rarely, the Salian dynasts. The term is generally confined to Imperial court culture conducted in Latin in Germany.[1] - it is sometimes also known as the Renaissance of the 10th century[2], so as to include developments outside Germania, or as the Year 1000 Renewal[3], due to coming right at the end of the 11th century. It was shorter than the preceding Carolingian Renaissance and to a large extent a continuation of it - this has led historians such as Pierre Riché to prefer evoking it as a 'third Carolingian renaissance', covering the 10th century and running over into the 11th century, with the 'first Carolingian renaissance' occurring during Charlemagne's own reign and the 'second Carolingian renaissance' happening under his successors[4].

The Ottonian Renaissance is recognized especially in the arts and architecture, invigorated by renewed contact with Constantinople, in some revived cathedral schools, such as that of Bruno of Cologne, in the production of illuminated manuscripts from a handful of elite scriptoria, such as Quedlinburg, founded by Otto in 936, and in political ideology, The Imperial court became the center of religious and spiritual life, led by the example of women of the royal family: Matilda of Ringelheim the literate mother of Otto I, or his sister Gerberga of Saxony, or his consort Adelaide, or Empress Theophanu.

After Otto I's imperial coronation in 963, there emerged a renewed faith in the idea of Empire in Otto's immediate circle and a reformed church, creating a period of heightened cultural and artistic fervor. Ottonian art was a court art, created to confirm a direct Holy and Imperial lineage as a source of legitimized power linked from Constantine and Justinian. In this atmosphere the masterpieces that were created fused the traditions which the new art was based on: paintings from Late Antiquity, the Carolingian period, and Byzantium. In this way, the term is used as an analogue to the Carolingian Renaissance which accompanied Charlemagne's coronation in 800. 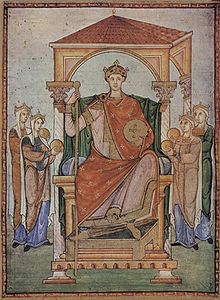 A small group of Ottonian monasteries received direct sponsorship from the Emperor and bishops and produced some magnificent medieval illuminated manuscripts, the premier art form of the time. Corvey produced some of the first manuscripts, followed by the scriptorium at Hildesheim after 1000. The most famous Ottonian scriptorium was at the island monastery of Reichenau on Lake Constance: hardly any other works have formed the image of Ottonian art as much as the miniatures which originated there. One of the greatest Reichenau works was the Codex Egberti, containing narrative miniatures of the life of Christ, the earliest such cycle, in a fusion of styles including Carolingian traditions as well as traces of insular and Byzantine influences. Other well known manuscripts included the Reichenau Evangeliary, the Liuther Codex, the Pericopes of Henry II, the Bamberg Apocalypse and the Hitda Codex.

Hroswitha of Gandersheim characterises the changes which took place during the time. She was a nun who composed verse and drama, based on the classical works of Terence. The architecture of the period was also innovative and represents a predecessor to the later Romanesque.

Politically, theories of Christian unity and empire thrived, as well as revived classical notions of imperial grandeur in the West. Otto II had a Greek wife, Theophanu, and Byzantine iconography entered the West. The globus cruciger became a symbol of kingly power and the Holy Roman Emperors were represented as crowned by Christ in the Byzantine fashion. It was in trying to revive the "glory that was Rome" that Otto III made the Eternal City his capital and increased in Greco-Roman fashion the ceremony of the court.

Leading figures of the Ottonian Renaissance