The Japanese Doll Festival (雛祭り, Hina-matsuri?), or Girls' Day, is held on March 3.[1] Platforms covered with a red carpet are used to display a set of ornamental dolls (雛人形, hina-ningyō?) representing the Emperor, Empress, attendants, and musicians in traditional court dress of the Heian period.[2]

The custom of displaying dolls began during the Heian period. Formerly, people believed the dolls possessed the power to contain bad spirits. Hinamatsuri traces its origins to an ancient Japanese custom called hina-nagashi (雛流し?, lit. "doll floating"), in which straw hina dolls are set afloat on a boat and sent down a river to the sea, supposedly taking troubles or bad spirits with them. The Shimogamo Shrine (part of the Kamo Shrine complex in Kyoto) celebrates the Nagashibina by floating these dolls between the Takano and Kamo Rivers to pray for the safety of children. People have stopped doing this now because of fishermen catching the dolls in their nets. They now send them out to sea, and when the spectators are gone they take the boats out of the water and bring them back to the temple and burn them.

The customary drink for the festival is shirozake, a sake made from fermented rice. A colored hina-arare, bite-sized crackers flavored with sugar or soy sauce depending on the region, and hishimochi, a diamond-shaped colored rice cake, are served.[3] Chirashizushi (sushi rice flavored with sugar, vinegar, topped with raw fish and a variety of ingredients) is often eaten. A salt-based soup called ushiojiru containing clams still in the shell is also served. Clam shells in food are deemed the symbol of a united and peaceful couple, because a pair of clam shells fits perfectly, and no pair but the original pair can do so.

Families generally start to display the dolls in February and take them down immediately after the festival. Superstition says that leaving the dolls past March 4 will result in a late marriage for the daughter.[4] 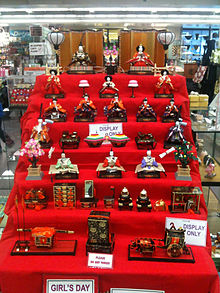 The Kantō region and Kansai region have different placement orders of the dolls from left to right, but the order of dolls per level are the same.

The term for the platform in Japanese is hina dan (雛壇?). The layer of covering is called dankake (段掛?) or simply hi-mōsen (緋毛氈?), a red carpet with rainbow stripes at the bottom.

An Emperor doll with an Empress doll, in front of a gold screen. The optional lampstands are also partially visible.

The dolls are usually placed in front of a gold folding screen byōbu (屏風?) and placed beside green Japanese garden trees.

Optional are the two lampstands, called bonbori (雪洞?),[5] and the paper or silk lanterns that are known as hibukuro (火袋?), which are usually decorated with cherry or ume blossom patterns.

The traditional arrangement had the male on the right, while modern arrangements had him on the left (from the viewer's perspective).

Accessories placed between the ladies are takatsuki (高坏?), stands with round table-tops for seasonal sweets, excluding hishimochi.

The third tier holds five male musicians gonin bayashi (五人囃子?). Each holds a musical instrument except the singer, who holds a fan.

Left to right, from viewer's perspective, they are the:

Just below the ministers: on the rightmost, a mandarin orange tree Ukon no tachibana (右近の橘?), and on the leftmost, a cherry blossom tree Sakon no sakura (左近の桜?).

The fifth tier, between the plants, holds three helpers or samurai as the protectors of the Emperor and Empress. From left to right (viewer's perspective):

On the sixth and seventh tiers, a variety of miniature furniture, tools, carriages, etc., are displayed.

These are items used within the palatial residence.

These are items used when away from the palatial residence.

The Hinamatsuri is also celebrated in Florence (Italy), with the patronage of the Embassy of Japan, the Japanese Institute and the historical Gabinetto Vieusseux.

Joseph Alsop, in his pioneering work on the history of art collection provides, the following definition: “To collect is to gather objects belonging to a particular category the collector happens to fancy; and art collecting is a form of collecting in which the category is, broadly speaking, works of art.” (Scott, 2008). Japanese dolls, Hinamatsuri are broken down into several subcategories. Two of the most prominent are Girl’s Day, hina-ningy, and the Boy’s Day musha-ningyo, or display dolls, sagu-ningyo, gosho-ningyo, and isho-ningyo (Scott, 2008). Collections can be categorized by the material they are made of such as wood dolls kamo-ningyo and nara-ningyo and, clay forms such as fushimi-ningyo and Hakata ningyo.

In the nineteenth century ningyo were introduced to the West. Doll collecting has since become a popular pastime in the West (Scott, 2008). Famous well known collectors from the West include individuals such as James Tissot (1836–1902), Jules Adeline (1845–1909), Eloise Thomas (1907–1982), and Samuel Pryor (1898–1985). James Tissot was known to be a religious history painter. In 1862, after attending a London Exhibition, he was drawn to Japanese Art. During the 1860s Tissot, was known as one of most important collectors of Japanese art in Paris. His collections included kosode-style kimonos, paintings, bronze, ceramics, screens and a number bijan-nigyo (dolls from late Edo period) (Scott, 2008). Adeline was known as a working artist and he is also known as “Mikika”. Adeline produced many works throughout his career as a working artist. He is best known for his “etchings” and received the Cross of the Legion of Honor for his Vieuex-Roven “Le Parvis Notre-Dame”. Unlike Tissot, Adeline is recognized as a true collector.[citation needed] A majority of Adeline’s collection consisted of ningyo, and only a few prints.

During the Meiji Era, three men became pioneers in collecting ningya, Kurihara Sokosut (1851-113), Nishizawa, Senko (1864–1914), and Tsuboi Shogoro (1863–1913). The three men are referred to as “Gangu san Ketsu” (The Three great toy collectors. They introduced a systematic approach to collecting ningyo, in an effort to preserve and document the various forms of ningyo (Scott, 2008). Shimizu Seifu, an artist and calligrapher, put his artistic ability to use by creating an illustrated catalog of his own collection of 440 ningyo dolls. The illustration was published in (1891) under the title “Unai no tomo”. Nishizawa Senko, a banker, gathered a significant collection on hina-ningyo. He was an active researcher, collector of stories, documents, and information relating to the development of hina-ningyo during the Edo period. Senko’s son Tekiho (1889–1965) inherited his collection but, a great portion of the collection was lost in the Kanto earthquake of 1932. (Scott, 2008). Tsuboi Shogoro, the first appointed Professor of Anthropology at the Tokyo Imperial University (Yamashita, Bosco, & Seymour, 2004), was the most trained of the three, and he brought a scientific element to the collecting of ningyo. Dolls have been a part of Japanese culture for many years; and the phenomenon of collecting them is still practiced. Many collections are preserved in museums including the Peabody Essex Museum, Kyoto National Museum, and the Yodoko Guest House.