The CheyTac Intervention is an American bolt action sniper rifle manufactured by CheyTac LLC for long range soft target interdiction. It is fed by a detachable single stack magazine, which holds 7 rounds. It fires .408 CheyTac or .375 CheyTac ammunition. CheyTac papers state that the entire system is capable of delivering sub-MOA accuracy at ranges of up to 2,500 yards (2,300 m), one of the longest ranges of all modern-day sniper rifles. It is based on the EDM Arms Windrunner.

CheyTac L.L.C researched the optimum cartridge case, bullet and barrel configuration for very long range use. For this the .408 Chey Tac cartridge was developed that fires very-low-drag mono metal bullets that were specially designed for the Long Range Rifle System by the now (2010) defunct company, Lost River Ballistic Technologies.

Lost River Ballistic Technologies inventor, Mr. Warren Jensen, stated that "the .408 Chey Tac was the first bullet/rifle system that utilizes a balanced flight projectile. To achieve balanced flight the linear drag has to be balanced with the rotational drag to keep the very fine nose (meplat) of the bullet pointed directly into the oncoming air. It should result in very little precession and yaw at extreme range and allows accurate flight back through the transonic region. This is hard to achieve for small arms projectiles. Mathematically you are at a great disadvantage trying to achieve balanced flight with a lead core non mono metal bullet. The rotational mass/surface area ratio is too high."

The balanced flight projectile patent can be found at the US Patent Office, Controlled spin projectile, US PAT No. 6,629,669. According to the patent, a projectile engraved and launched according to the specifications of the patented invention should decelerate from supersonic flight through transonic to subsonic in a stable and predictable manner effective to a range beyond 3,000 yards (2,743 m). It implies that, amongst several other preconditions, the rifle barrel has to have specific rifling dimensions to achieve a desired amount of axial air drag on the bullet's surface, which reduces the bullet's spinrate to achieve balanced flight.

The .408 CheyTac's light recoil is attributed to the McArthur PGRS-1 muzzle brake that was designed by gunsmith and firearm inventor, Bruce McArthur, owner of The Flint & Frizzen Gun Shop in Clarkston, Michigan. McArthur designed it to strip gases from the projectile before it leaves the muzzle brake.

The CheyTac muzzle brake suppressor, manufactured by OPS INC, is a stainless steel suppressor. The all stainless steel construction with no replaceable parts guarantees a suppressor life that equals or exceeds the life of the rifle. When totally filled with water, the suppressor can be drained in 6 seconds which allows use when emerging from water. If the operator chooses to switch to the muzzle brake, a repeatable 6 minute of arc zero change for elevation is required.[1]

There are two different day optical sights available. The primary sight is the Nightforce NXS 5.5-22x56 variable magnification telescopic sight with a 56 mm objective. The alternate sight is the US Optics SN-9. The night vision system chosen is the AN/PVS-14 GEN III Pinnacle monocular. The PVS-14 is attached to the day optic using the Monoloc device. An AN/PEQ-2 infrared laser is used for system support with the night vision sight under conditions where there is insufficient ambient light or the IR laser is needed for further target illumination. The device is attached to a titanium strut.[1]

The KESTREL 4000 or 4500 (NV) meteorological and environmental sensor package is used to measure the wind, air temperature, and air pressure. It also collects relative humidity, wind chill, and dew point. All of these points of data are fed directly into the tactical computer so that no manual input is necessary. The KESTREL 4500 NV model has the capability to be used with night vision devices.[2][3] 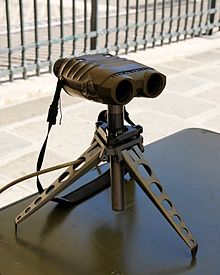 The system is said to provide the operator with a simple elevation and windage solution through complete integration of external environment, operator, and gun system specifications, enabling small arms weapons operators to produce highly accurate long-range trajectories to any number of specified targets at extreme ranges.

The software package is said to operate on a variety of consumer, hardened and mil-spec R-PDAs running the Windows Mobile 2003 operating system, using inputs from the Kestrel handheld weather station and Vector IV laser rangefinder binoculars.

Data tables in print are provided in the event the tactical ballistic computer fails or the batteries for the device fail. Without computer support the effectiveness of some long-range shooters could be severely reduced, since they may rely heavily on computer support to obtain correct ballistic solutions.[1]

On the Discovery Channel TV show Future Weapons April 9, 2007 episode "Massive Attack" the host Richard Machowicz, a former United States Navy SEAL, made 3 out of 6 shots hit a human sized sheet of metal at a distance of 2,530 yards (2,313 m) at Arco Pass in Idaho.

The main capability differences between the different versions are governed by barrel length which determines the obtainable muzzle velocity. Higher muzzle velocity will extend the effective range of a rifle, everything else being equal. Also, the M-200 and the M-200 Carbine comes with a detachable box magazine and a telescopic stock, whilst the other variants are built on a glass-fiber fixed McMillan stock.