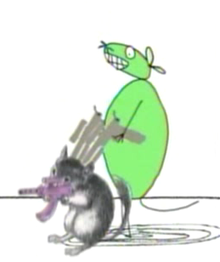 12 oz. Mouse is an animated television series that aired on the American channel Cartoon Network as part of the Adult Swim late night programming block. The show centers on the antisocial actions of an alcoholic mouse known as "Mouse Fitzgerald", "Fitz," "Butch," or simply "Mouse". The show was created by Matt Maiellaro, co-creator of Aqua Teen Hunger Force, and produced by Williams Street for Adult Swim.[1] The series concluded its initial run on Adult Swim on December 18, 2006 with its twentieth episode, leaving the plot unresolved. In February 2007, production began on additional episodes for internet distribution on Adult Swim Video.[2] The first and so far only online episode premiered May 16, 2007.

The series is animated in the style of crude drawings with limited motion. The usage of firearms, alcohol consumption, and indifferent homicidal acts are common activities of the psychopathic lead character Mouse Fitzgerald.[3] The plot revolves around a bizarre conspiracy which is constantly building on itself and taking seemingly nonsensical twists and turns. At times the narrative becomes obfuscated or nonlinear, but it simultaneously reveals connections that hint at an objective story. The dialogue is cryptic; clues and secret messages are hidden throughout each episode, including the credits. Creator Matt Maiellaro has indicated that the development of 12 oz. Mouse was influenced in part by the Theatre of the Absurd, and surrealistic films such as those by director David Lynch. Written in serial format, each episode picks up where the previous one left off.

In early airings, the show is also known as "oz. Mo." In the title sequence, the "camera" was so close to the "12 oz. Mouse" title card that only the characters "oz. Mo" were visible. However, it was later discovered[who?] that "Ozmo" is the name of an educational cartoon produced by the BBC.

The animation for the character Shark originates from the Sealab 2020 cartoon, from which clips were used to create the majority of the animation in the Sealab 2021 show on Adult Swim. The shark animation first appeared on Adult Swim on the show Space Ghost Coast to Coast, which Space Ghost referred to him as "Old Kentucky Shark." The shark later appeared towards the end of an Aqua Teen Hunger Force episode entitled "Escape From Leprauchpolis."

The series main characters are Mouse Fitzgerald, his companion Skillet and the (at times) antagonistic Shark and Rectangular Businessman.

According to the network, the show is about a mouse named Mouse Fitzgerald (Fitz) who is fond of beer and caught in a world of espionage, love, and the delights of odd jobs. The show employs a serial format, and its ongoing storyline developed from absurdist comedy to include mystery and thriller elements. Fitz begins to recover suppressed memories that he once had a wife and a child who have now vanished. This leads him to seek answers about his past and the shadowy forces that seem to be manipulating his world.

Fitz suspects there is a sinister conspiracy which appears to revolve around fields of "asprind [sic]" pills beneath the city, and Shark, Clock, and Rectangular Businessman's attempts to control the nature of time and reality. Fitz and Skillet receive help from Liquor, Roostre, Stoned Peanut Cop and others as they engage in gun battles, blow things up, and try to understand cryptic hints. The show also sometimes contains surreal "subliminal" images that flash across the screen during key plot moments, including skulls, mustached snake beasts and people screaming. The series concludes the revelation that Fitz has been kidnapped and placed into a simulation—not unlike The Matrix—by the Shadowy Figure. He is about to be killed by Shark and the Rectangular Businessman, in their true forms outside the simulation, when he is rescued by the true form of Peanut Cop and a nurse who works in the simulation chamber. They kill Shark and Rectangle Businessman, but it is unknown if they are truly dead because the simulation in which most of the show takes place is probably taking place in another simulation. One of the purposes of the simulation seen in most of the show was to extract information from Fitz. The conclusion to episode 20 is ambiguous as to whether or not it is actually the end of the series, as some aspects of the plot remain unresolved, and Golden Joe says "I thought this was done." Fitz replies, "I thought so too. I guess we're not."

The pilot episode for 12 oz. Mouse, "Hired", premiered on June 19, 2005 and became a regular series in the Adult Swim lineup in October 2005. An Adult Swim bump shown with the sixth installment claimed that twenty additional episodes were being produced and taunted viewers who had complained they couldn't understand the absurdist series. On December 31, 2005 the "12 oz. New Year Marathon" aired, replaying all six episodes followed by the premiere of the then unfinished seventh episode "Adventure Mouse". The second season aired on Adult Swim on Monday mornings at 12:45 AM EST from September 25, 2006 to December 17, 2006. On May 16, 2007, the 21st episode premiered on the adult swim fix as a web-only episode.

A DVD release of the complete series was released February 29, 2008 exclusively on the Williams Street shop. The DVD cover depicts Leonardo's "The Last Supper" with the 12 Oz. Mouse cast replacing Christ and the 12 Disciples. However, under a black light, the cover depicts the skeletons of the characters, as well as letters and symbols which made an email address, that, if emailed, as of July 2008, yields nothing. It was first announced to be in production in an interview with creator Matt Maiellaro. The series is presented as a single, continuous movie, with newly-produced footage bridging the gaps between episodes. It also features production footage, new music, episode 13, "Auraphull", in its entirety, and collected fan art.[2]

In addition to being available on DVD, all episodes are available on the "Build a Custom DVD" feature on the Adult Swim website.

The hip hop duo Danger Doom (who specialize in making rap songs inspired by Adult Swim shows and is occasionally heavily marketed during Adult Swim bumps) has a song inspired by 12 oz. Mouse entitled "Korn Dogz" from their EP "Occult Hymn".[5] The song uses audio clips from the episode "Rooster", with the line "Corn dogs for the pickin'" being recited by Danger Doom's MC MF Doom and Mouse Fitzgerald.

Footage from the show makes a brief appearance in Aqua Teen Hunger Force Colon Movie Film for Theaters (on the guest monitor on Space Ghost Coast to Coast).