Radical axis
This article is about the radical axis used in geometry. For the animation studio, see Radical Axis (studio). 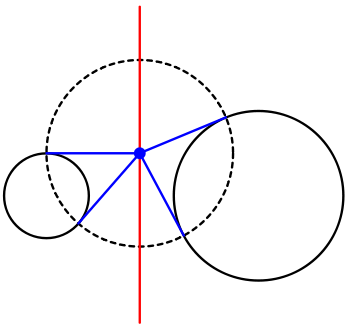 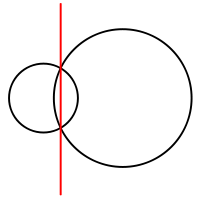 If the two circles intersect, the radical axis is the secant line corresponding to their common chord. 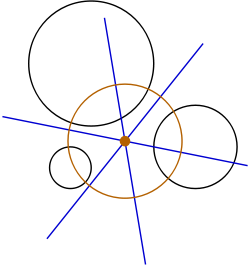 The radical center (orange point) is the center of the unique circle (also orange) that intersects three given circles at right angles.

At the radical center, there is a unique circle that is orthogonal to all three circles. This follows because each radical axis is the locus of centers of circles that cut each pair of given circles orthogonally. 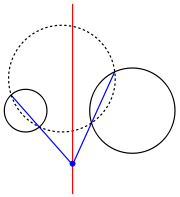 A special case of this approach is carried out with antihomologous points from an internal or external center of similarity. Consider two rays emanating from an external homothetic center E. Let the anithomologous pairs of intersections points of these rays with the two given circles be denoted as P and Q, and S and T, respectively. These four points lie on a common circle that intersects the two given circles in two points each.[4] Hence, the two lines joining P and S, and Q and T intersect at the radical center of the three circles, which lies on the radical axis of the given circles.[5] Similarly, the line joining two antihomologous points on separate circles and their tangents form an isoceles triangle, with both tangents being of equal length.[6] Therefore, such tangents meet on the radical axis.[5] 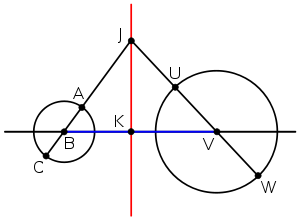 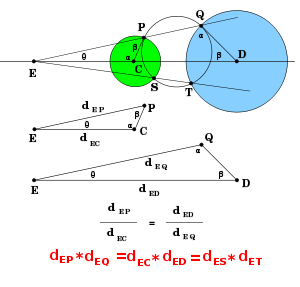 Referring to Figure 3, the radical axis (red) is perpendicular to the blue line segment joining the centers B and V of the two given circles, intersecting that line segment at a point K between the two circles. Therefore, it suffices to find the distance x1 or x2 from K to B or V, respectively, where x1+x2 equals D, the distance between B and V.

Consider a point J on the radical axis, and let its distances to B and V be denoted as d1 and d2, respectively. Since J must have the same power with respect to both circles, it follows that

where r1 and r2 are the radii of the two given circles. By the Pythagorean theorem, the distances d1 and d2 can be expressed in terms of x1, x2 and L, the distance from J to K

Dividing both sides by D = x1+x2 yields the equation

Subtracting the same equation yields the corresponding formula for x2

If the circles are represented in trilinear coordinates in the usual way, then their radical center is conveniently given as a certain determinant. Specifically, let X = x : y : z denote a variable point in the plane of a triangle ABC with sidelengths a = |BC|, b = |CA|, c = |AB|, and represent the circles as follows:

Then the radical center is the point