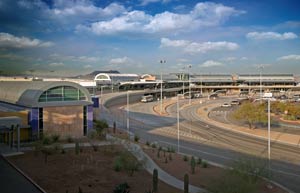 Tucson International Airport Airport codes|TUS|KTUS|TUS is a joint civil-military public located six miles (10 km) south of the of Tucson, a city in Pima County, , . It is owned and operated by the Tucson Airport Authority, which also operates . Tucson International is the second largest commercial airport in Arizona.

The airport is completing a Concourse Renovation Project,the last phase in an extensive remodeling begun in 2000 that added convert|82000|sqft|m2|abbr=on. to ticketing and baggage claim. On , , the previous West/East concourses and gates were renumbered with the East Concourse becoming Concourse A: Gates A1 - A9, and the West Concourse becoming Concourse B: Gates B1 - B11. The international arrival area will also be moved to the main terminal in Concourse A, whereas before it existed in a separate terminal. [ [http://www.tucsonairport.org/taa/releases/2007/may07/amenities.htm Tucson Concourse Renovation Project] ] [ [http://www.tucsonairport.org/taa/releases/2008/mar2008/Concourse_gates.htm Tucson International Airport Renames Concourses] ]

During the airfield was used by the Air Technical Service Command.

In 1948, the Tucson Airport Authority was created as a to operate the airport. The airport was then moved to its current location and operated on the west ramp out of three hangars vacated by military manufacturing companies.

According to records, the airport had 2,223,008 commercial passenger boardings (enplanements) in 2007 and 2,121,813 enplanements in 2006, an increase of 4.77%. [ [http://www.faa.gov/airports_airtraffic/airports/planning_capacity/passenger_allcargo_stats/passenger/ FAA Passenger Boarding Data] ]

In , Tucson International Airport set a new passenger record for the fourth consecutive year with 4,429,905 total arriving and departing passengers, an increase of 4.8% over the 2006 total. Of the average of the appx. 82 daily departures in 2007, Tucson's top ranked carriers included , with a 29% market share, which had accounted for 20% of the total traffic, and which had a 11% market share.

All ticketing occurs at the ticketing level and all baggage claim is located at the baggage level. The terminal's third level contains a full service restaurant, Jet Rock Bar & Grill.

Prior to March 2008, Concourse A was known as the East Concourse

"* Due to American Airlines' operations at Gates A7 and A8, Gate A9 cannot support airline operations"

Prior to March 2008, Concourse B was known as the West Concourse

Tucson International Airport also hosts Tucson Air National Guard Base, a 92 acre complex on the northwest corner of the airport that is home to the (162 FW), an (AETC)-gained unit of the . The largest fighter unit in the United States, the 162 FW operates over 70 C/D/E/F aircraft in three operational fighter squadrons. The wing provides training on the , augmenting the active Air Force's (56 FW) at , Arizona as a Formal Training Unit (FTU) for training Regular Air Force, , and /Allied/Coalition F-16 pilots.

The wing also hosts the / (ANG AFRC) Command Test Center as a tenant unit, which conducts operational testing on behalf of the Air Reserve Component. The 162 FW also hosts "Snowbird" operations during the winter months for Air Force, , and and units from northern tier bases in the continental United States, as well as and flying units. [http://en.wikipedia.org/wiki/162d_Fighter_Wing] [http://www.aatc.ang.af.mil/] [http://www.162fw.ang.af.mil/]

During its history at TUS, the 162nd has operated the , , , and aircraft [http://en.wikipedia.org/wiki/162d_Fighter_Wing] . Not counting students or transient flight crews, the instalation employs over 1,700 personnel, over 1,100 of whom are full-time and the remainder traditional part-time Air National Guardsmen. Although an AETC organization, the 162nd also maintains an F-16 Alert Detachment at nearby in support of .