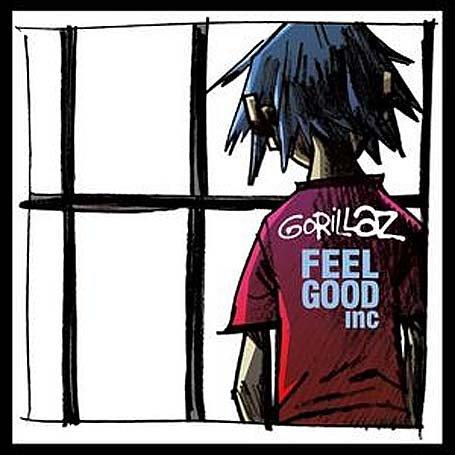 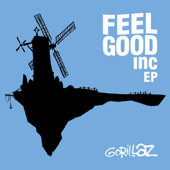 "Feel Good Inc." is a song by , on their album "", featuring . The song was released as the lead single from that album on in the (see ). At the same time it was also released in various other countries, excluding the where it was a radio-only single. "Feel Good Inc." peaked at #2 in the and #14 in the U.S., at the time the band's highest positions. It also topped the , another first for the band. In 's entire career to date, this is the only song to reach the top 40 on the U.S. Billboard. The tune heard during the acoustic portion of the song is very similar to that of 's Staring at the Sun.

The surreal music video for the song features 2D, Russel, and a shirtless Murdoc playing the song while trapped in a looming obelisk-like tower (labeled "Feel Good Inc."), which shadows over a run-down landscape. Noodle, playing an acoustic guitar, flies outside on the small floating island which is apparently kept aloft by a windmill.

At the beginning of the video, while the camera is rising up from the Feel Good Inc. tower, a sample of the dub of "Clint Eastwood" entitled "A Fistful of Peanuts" can be heard.

Two of the main themes of the video are mental freedom and the "dumbing down" of mass culture by the media. [cite web|title=Gorillaz-Unofficial album webpage|url=http://www.gorillaz-unofficial.com/discog/dd.htm|accessdate=2006-11-05] There are also the themes of escape versus imprisonment and the personal power to choose between the two and being trapped by the things you make. [ Browne, Cass. "Gorillaz: ", Riverhead Books Inc., 2006, p. 213.] The themes in the single, like those of the entire album, are based on Albarn's observations on the state of the world [http://www.gorillaz-unofficial.com/discog/dd.htm] .

2-D is depicted surrounded by many sinful distractions, but as he gazes out the dusty, barred windows, all he appears to want is to be free and join Noodle on her floating island. The tower represents the mental prison that the people are in. Those lying on the floor represent those who have already been "dumbed down", while 2-D, Murdoc, and Russel are the ones who have awakened. 2-D is trying to wake all the people from their half-dead state by yelling at them through his megaphone, like an activist.

Back in the tower, appear as ghastly, larger-than life, seemingly images on surrounding television screens, laughing at the lonesome 2-D, the content Murdoc, and the seemingly ambivalent Russel. Through their singing, they taunt 2-D about how he is not strong enough to fight them; that his attempts to wake everyone up and to escape the prison are futile; that he should not resist them; and that they are the ones in control ("With your sound you're in the blink/ Going to bite the dust/ Can't fight with us/ With your sound you kill the inc/ So don't stop get it, get it/ Until you're jet ahead/ And watch the way I navigate, ha ha ha ha"). They represent both the voices of the "corporation" — the media, which can brainwash people into believing certain things and convince people to follow the mainstream — and the “false icons” of the media, a reference to how some people seem to idolize and over-emphasize celebrities. This can be seen most especially in the fact that they claim 'Your sound' (individualistic thoughts) will 'Kill the Inc' (destroying the tower). Cquote|Many people in life seem drawn to the more insane figures, who throw their weight around, seemingly oblivious to the effect that they have on people's feelings. Maybe they see this attribute as a sign of strength. However, I believe it's a downward spiral in which everyone gradually has their soul eroded.
—Noodle on the Feel Good Inc. video [ Browne, Cass. "Gorillaz: Rise of the Ogre", Riverhead Books Inc., 2006, p. 217.]
This is part of the band's Reject False Icons campaign [http://www.rejectfalseicons.com/] .

At the end of the video, 2-D appears emotionally beaten by his surroundings, and returns to the state he was in when the video began, repeating "Feel Good" until the video finally ends (in an exact reversal of the intro, apart from the movement of 2-D's mouth). The repetition of "Feel Good" represents that 2-D is convincing himself that everything is OK (as if he is brainwashing himself to believe it), instead of facing the harsh truth of the situation. [ Browne, Cass. "Gorillaz: Rise of the Ogre", Riverhead Books Inc., 2006, p. 216.]

The music video for the Gorillaz song "" bears a connection to this video, depicting two helicopter gunships catching up to Noodle's floating windmill island and attacking it, although nothing is seen of the tower nor the other three band members. The impression is that Noodle's island is under observation while orbiting the floating brothel in "Feel Good Inc." and then attacked when it breaks free in "".

This video was something of a departure from those previously done by Gorillaz. The coloring was rather dark and layered, as opposed to flat and minimally-shaded as it had been in earlier videos. Moreover, the integration of and two-dimensional animation was much more seamless than it had been previously. Sweeping "camera movements" and usage of the multiplane effect were also featured. The video was produced by , responsible for most past Gorillaz videos and Gorilla Bitez. In commentary for the video, Russel admits that "...they must be real good, cos I can't tell which bits are animation and which bits are real".

Uses in other media

"Feel Good Inc." was also featured as a playable track in 's game "Battle of the Bands". The game featured covers of the song with several different musical styles including Rock/Metal, Funk/Hip-Hop, Country Western, Latin, and Marching Band.

This song was also featured in Apple's 2nd generation commercials. In lieu with this, Apple plays this song frequently in big keynote events like Macworld.

The introduction to this song was featured in

The film featured "Feel Good Inc." during a training sequence.

The episode entitled "Meaning" of House, M.D. uses this song during the showing House running to work.