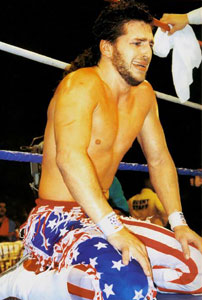 Barr is the son of promoter and the brother of , and began his career in the (PNW) territory in April 1987. About a year and a half later, he began wrestling as Beetlejuice, based on the title character of the 1988 movie. The character, wearing face paint and flour in his hair, was a cartoonish babyface.

Barr had a sexual encounter with a 19 year old girl after a PNW card on July 16, 1989; the girl later filed rape charges. Barr continued to wrestle as Beetlejuice, despite the charges, and the attention brought to them by the . A year later, while admitting in a police interview the girl did not consent, Barr worked a plea-bargain, and was convicted of first-degree sexual abuse. He was fined, placed on probation, and sentenced to community service, but served no jail time.

After the trial, Barr's license to wrestle in Oregon was not renewed (for unrelated reasons); he joined briefly in 1990 as The Juicer, still playing the cartoonish babyface. Due to a faxing campaign, his rape conviction followed him; that along with his small stature in a wrestling world then dominated by large wrestlers, he soon found himself unpushed and, eventually, released.

After leaving WCW, Barr was brought into Mexico's Empresa Mexicana de la Lucha Libre (EMLL) promotion by . He initially wrestled under a mask as The American Love Machine, and was very successful. A year after entering EMLL, the American Love Machine faced off against another masked wrestler, , in a mask-vs-mask match. 18,000 fans sold out the 17,000 seat in and another 8,000 fans watched on big screen TV in the parking lot to see the card. The match ended when "Love Machine" administered a Piledriver (Martinete in Spanish) against Blue Panther, an illegal move in Mexican wrestling, thus losing his mask.

Soon afterward, Barr left EMLL to join Konnan's (AAA) promotion. As "Love Machine" Art Barr, he turned heel, and formed the tag team "La Pareja del Terror" (The Pair of Terror) with . The pair were highly successful, becoming arguably the most hated in history. Barr and Guerrero also formed a heel stable with Konnan and Madonna's Boyfriend, known as (The Crazy Americans).

Despite both the acclaim and the financial success, Barr's time in Mexico took a toll on him, as he was reportedly homesick (his wife and son remained in Oregon while he was working in Mexico). Eventually, he turned to alcohol and drugs for solace, despite the concern of his friends in the business.

On , , AAA held the "When Worlds Collide" pay-per-view card (with some help from WCW) at the L.A. Sports Arena. La Pareja del Terror faced off against and in a double hair vs. mask match, which was acclaimed as one of the greatest PPV matches ever. Around this time, Barr and Guerrero were also in talks with .

was very interested in Barr and Guerrero coming into the company to feud with their top tag team Public Enemy. At the same time, WWF, WCW and New Japan also showed interest in the tag team of Guerrero and Barr.

On , , Art Barr was found dead lying with his child at his home in . Preliminary reports said that he died of an , but later reports said that he died under unknown circumstances. Barr did not have heart problems, no aneurysm or internal bleeding, and no ring injuries. He had a mixture of alcohol and drugs in his blood stream. was his best friend around this time period.

According to Eddie Guerrero, when they began tagging he first used the Frog Splash as the "Jackknife Splash". Barr took a liking to the move, began using it regularly and adopted it as his finisher. commented to Barr that he "Looked like a Frog", thus leading Barr to name his move the Frog Splash. As a tribute to his friend, adopted Barr's trademark Frog Splash as his finishing maneuver. It has since become a trademark move of several wrestlers in Mexico and the United States. , who was also close to Barr at the time of his death, would, when performing in WCW in the late nineties, occasionally accuse performer of stealing Jericho's tapes in reference to a personal joke between himself and Barr.