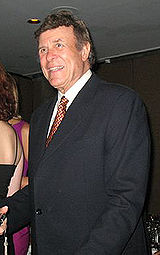 Bruce Morrow (born Bruce Meyerowitz on October 13, 1937 in Brooklyn, New York) is an American radio personality known to many listeners as Cousin Brucie.

Morrow's first stint in radio was in Bermuda at ZBM-AM, where he was known as "The Hammer."

Morrow began his stateside career at New York Top 40 station WINS in 1959. In 1960, he moved to Miami for a brief stint before returning to the New York airwaves the following year on AM 770 powerhouse WABC, another Top 40 outlet. Morrow's return to New York City came at the precise moment that rock and roll music was exploding across the Baby Boom demographic and Morrow found himself on the most powerful radio station on the East Coast at the onset of the so-called British Invasion. His main competition came from his previous station WINS, which featured "Murray the K," a DJ who claimed close association with the Beatles.

"Cousin Brucie" quickly became a success on WABC's teen-oriented evening shift in the 7 p.m. to 9 p.m. slot. Morrow became a commercial radio powerhouse and household name through his ability to maintain a rapport with his listeners while smoothly mixing the diverse musical genres of the time (Motown soul, pop, hard rock, surf music, novelty records), and then seamlessly segueing into commercials for youth-oriented sponsors like Thom McAn shoes, local clothing outlets in the New York and New Jersey areas, and events such as concerts and drag-strip races.

On August 15, 1965, it was Morrow who introduced the Beatles during the first of their historic Shea Stadium concerts.[1] The Shea stadium concert was released as a concert film in 1966 as The Beatles at Shea Stadium. Morrow had a close relationship with Elvis Presley, who called him at home on a regular basis.[citation needed]

He served at WABC for 13 years and 4,014 broadcasts until August 1974, when he jumped to rival station WNBC; after three years there, he left the airwaves to team with entrepreneur Robert F.X. Sillerman to become the owner of the Sillerman Morrow group of stations, which included WALL; WKGL, now WRRV, in Middletown, New York; WJJB, later WCZX, in Hyde Park, New York; WHMP in Northampton, Massachusetts; WOCN in South Yarmouth, Massachusetts; WRAN (now dark) New Jersey 1510 in Randolph, New Jersey; and television station WATL Atlanta. The group later purchased WPLR in New Haven, Connecticut.

In 1982, Morrow returned to the DJ role with New York's WCBS-FM, an oldies station. Initially, he filled in for Jack Spector every third Saturday evening for the Saturday Night Sock Hop program. Following Spector's resignation in 1985, Morrow took over the show and renamed it the Saturday Night Dance Party. The station also added his nationally-syndicated show Cruisin' America. In 1986, he took on the Wednesday evening slot, where he hosted The Top 15 Yesterday and Today Countdown. In 1991, the Wednesday show became The Yearbook, focusing on music from a year between 1955 and 1979. Cousin Brucie was also the "breakfast presenter" on Atlantic 252 from 1992 to 1996.

When Cruisin' America ended its run in December 1992, Morrow continued hosting a show called Cruising with the Cuz Monday evenings until the end of 1993. After that show ended, he hosted the Saturday night and Wednesday night shows there until the station's change to the adult hits format called Jack FM on June 3, 2005. Shortly thereafter, he signed a multi-year deal to host oldies programming and a weekly talk show on Sirius Satellite Radio.

Morrow was inducted into the National Radio Hall of Fame in 1988. In April 2010, he received the Bravery In Radio Award from William Paterson University and its radio station WPSC 88.7 FM, for a track record of "inspirational radio programming and lifelong commitment to the medium of radio."[citation needed]

His voice can be heard in the films Across the Universe, Gas Pump Girls, and Dirty Dancing; he also had a bit part in the latter title, playing the magician who saws Baby (Jennifer Grey) in half. Morrow also appeared in the 1978 film Sgt. Pepper's Lonely Hearts Club Band and had a guest appearance in the 1990s Babylon 5 television series (in "War Without End" (Part 2), playing the first officer of Babylon 4). In "Across the Universe" the radio station call letters he used were WEAF which were the call letters of 660 in New York before it became WNBC.[2] He also played a TV contest announcer in "Between Time and Timbuktu," a 1972 PBS production featuring several short stories by Kurt Vonnegut, linked together by an unfortunate astronaut, played by William Hickey, who was launched into a time warp after winning the contest.

For the last two decades, Morrow has actively worked for the Variety Children's Charity in support of disadvantaged, physically challenged, sick and needy children.

Morrow was inducted into the National Association of Broadcasters Hall of Fame in the radio division in 2001.[3]