Art Instruction Schools, better known to many as Art Instruction, Inc., is a home study correspondence course providing training in cartooning and illustration.[1] In its early years the school was named Federal School of Applied Cartooning.

The company is located in Minneapolis, Minnesota, where it was founded in 1914 as a branch of the Bureau of Engraving, Inc., to train illustrators for both the growing printing industry and the Bureau itself. Artists who received this training through these home study courses entered the fields of newspapers, printing and advertising.[1] Joseph Almars (1884–1948), who was born in Minneapolis, was both the vice president of the Bureau of Engraving and the president of Art Instruction, Inc.[2] 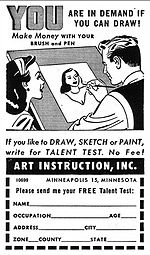 Ad as it appeared in Modern Romances (November 1949)

Art Instruction, Inc. was known to many aspiring artists as the Draw Me! School, because of the familiar "Talent Test" advertising campaigns seen in magazine ads, matchbook covers with Spunky the Donkey, TV commercials and online promotions with the "Draw Me!" ad copy.[1][3][4]

Almars and Federal School dean Charles Lewis Bartholomew were the editors of the course. Born in Charlton, Iowa, Bartholomew studied under Burt Harwood and Douglas Volk. Primarily a children's books illustrator, he drew newspaper strips: Cousin Bill (1909), George and his Conscience (1907), Bud Smith, the Boy Who Does Stunts (1908–12), Alexander the Cat (1910) and Mama's Girl-Daddy's Boy. 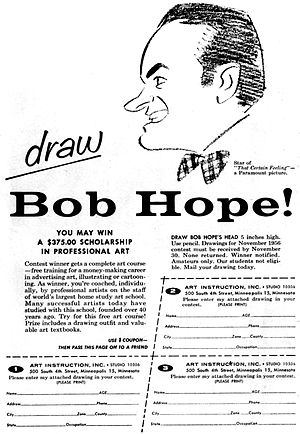 Two of the school's instructors were cartoonist Mort Walker and Minneapolis native Charles M. Schulz (later of Peanuts fame). When Schulz was in high school, his mother saw an ad for the Art Instruction, Inc. talent test that asked, “Do you like to draw?” Schulz took the $170 course, a huge sum during the Depression, while his father labored to make the payments. After World War II, Schulz worked on Catholic comic magazines and then signed on as an instructor with Art Instruction, Inc. He was still employed there when he began sketching the characters that later were developed into Peanuts.[5] Several of the Peanuts characters, including Charlie Brown, Linus, Frieda and "the little red-haired girl" were based on Schulz' co-workers and friends at Art Instruction. Other instructors who were friends of Schulz included Louise Cassidy and Jim Sasseville. Louise Cassidy was the basis for the character of Aunty Climax in a short-lived comic strip by Jim Sasseville.

Textbooks used in the 1940s and 1950s were edited by the cartoonist-illustrator Coulton Waugh, who drew the Dickie Dare comic strip. In addition to its softcover textbooks (one for each subject in the art field), Art Instruction, Inc. also had its own magazine, The Illustrator, published quarterly to showcase outstanding student work. By 1950, the fee for the course had increased to $300. When the company received "Draw me" submissions, these were turned over to salesmen who drove from one town to another, often arriving at a home unannnounced and launching into a sales pitch.

Despite advances in digital art, Art Instruction Schools continues to follow the teaching traditions it established over a century ago, as detailed by Richard Chin, writing in the St. Paul Pioneer Press:

Tippy the turtle. Spunky the Donkey. Cubby the bear. The Pirate. You've likely seen their faces on late-night TV or in a small ad in the back of a magazine. "Do you like to draw?" they wonder. "Draw me," they urge. For decades, these characters and their kin have tempted talented and not-so-talented doodlers, offering a free art test. The one-sheet flier asks you to sketch "draw me" heads, finish a drawing of a house, answer a few questions. The return address is in Northeast Minneapolis, headquarters of Art Instruction Schools. Since 1914, it has been the home-correspondence school to thousands of would-be painters, cartoonists, illustrators, art directors and animators. Its "draw me" advertisements were once so ubiquitous that they've inspired parodies. 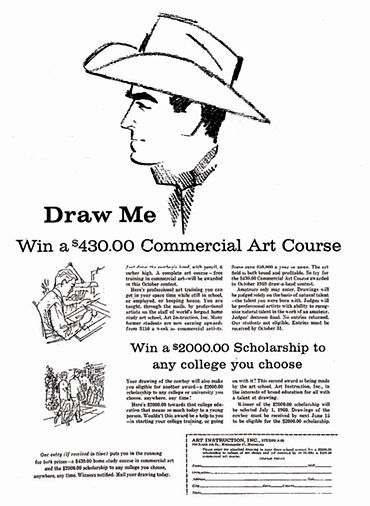 Full-page ad as it appeared in the Oakland Tribune on Sunday, November 13, 1959.

In a time when distance learning involves the Internet and commercial illustration is generated by computers, the concept of a mail-correspondence art school seems like a quaint throwback. But Art Instruction Schools continues to crank out people who know how to draw with pen, pencil or brush, the old-fashioned way. Prospective students still get a visit from one of the school's 100 or so enrollment representatives who roam the country conducting entrance interviews/sales pitches. If you sign up for the $3,485 course, the 27 lessons are sent to you one at a time. You work at your own pace and send your assignments back to the school, where an instructor grades them, makes suggestions and mails them back. If you stick with it for 1½ to two years, you'll cover such fundamentals as shapes, shading, colors, perspective, animal and figure drawing, lettering, cartooning, keylining and fashion illustration. Accredited by the Distance Education and Training Council, the course is worth up to 24 college credits, according to school marketing director Steve Unverzagt. "It's literally an old-school kind of method," he said.[6]