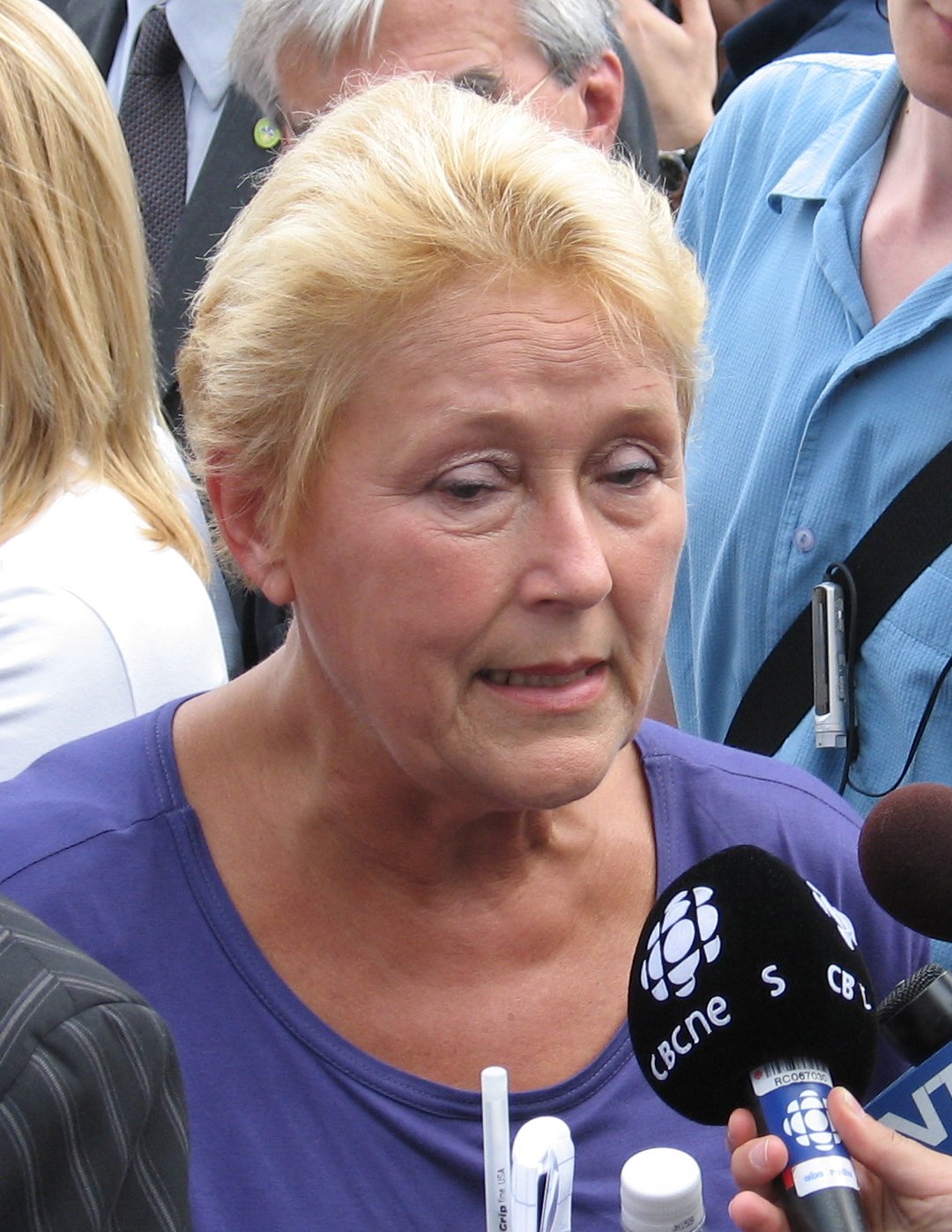 She is married to , former head of Quebec's , and is the mother of four children (Catherine, Félix, François-Christophe and Jean-Sébastien). She currently resides in on 's .

Marois holds a bachelor's degree in social work from , as well as a master's degree in business administration (MBA) from . During the 1970s she gained experience with several community organizations, before working as press attachée for then-finance minister . She also served as chief of staff for , minister responsible for the condition of women, and taught for some time at .

Marois was first elected to the in the 1981 election as the (MNA) for La Peltrie. She immediately joined the government of as Minister for the Status of Women. In 1983, she was promoted to Minister of Labour and Income Security and Minister responsible for the region.

When Lévesque resigned as party leader and , Marois joined the race to succeed him, placing second behind . The PQ, however, lost the 1985 election, in which Marois also lost her seat. From 1988 to 1989, she served as vice-president of the party and chair of the PQ's national executive.

In the 1989 election, Marois was returned as the member for . She continued serving on the opposition bench, variously, as critic for industry and trade, public administration and the environment.

When the PQ returned to power following the 1994 election, Marois was appointed to the cabinet of as Minister for Administration and the Public Service and, for the last few months of Parizeau's tenure, as Minister of Finance and Minister of Revenue. Once succeeded Parizeau as Premier, he advised the Lieutenant Governor to appoint Marois his Minister of Education. She became Minister of Health and Social Services following the 1998 election.

The ascension of as PQ leader and premier resulted in Marois returning again to the position of Minister of Finance. With the defeat of the PQ government in the 2003 election, Marois became the PQ opposition's education critic.

She quickly started to organize her leadership bid following the PQ electoral defeat. Her close supporters founded Groupe Reflexion Quebec, which served as a . Her key organizors were Danielle Rioux, , , , and .

Marois announced her candidacy in the election for the leadership of the PQ following the sudden resignation of Landry in June 2005. She won 30.6% of the vote placing second to .

Marois retired from the National Assembly in March 2006, stating that after 25 years in elected politics it was time for her to pursue other interests. She vowed to remain active in the PQ, and reaffirmed her confidence in Boisclair's leadership. She was succeeded as MNA for Taillon by .

In the March 26, 2007 Quebec provincial election, the Parti Québécois was reduced to third place in the , behind both the governing and the opposition . Following this disappointing result, PQ leader announced his resignation as leader on May 8, 2007. Marois was considered a leading candidate to replace Boisclair, especially following federal leader 's withdrawal from the race. [ [http://www.thestar.com/News/article/213361 TheStar.com | News | Duceppe drops out of PQ race ] ]

No other candidate steped forward to contest the election, and Marois was acclaimed leader on , . She led the party from outside the National Assembly until winning the Charlevoix by-election on .

On August 13, 2007, Marois announced her candidacy for the riding of Charlevoix, after the incumbent, , retired from politics after 13 years as the MNA. [ [http://www.canoe.com/infos/quebeccanada/archives/2007/08/20070813-150227.html] ] The by-election was held on September 24, 2007. Marois did not compete against a candidate from the minority governing Liberal party, which chose not to present an opposing candidate, [ [http://www.cbc.ca/canada/montreal/story/2007/08/23/marois-charlevoix.html PQ Leader Marois gets chance at assembly seat Sept. 24 ] ] but did face candidate , who had been a candidate in the same riding against Bertrand in the 2007 general elections, and won with 58.2% of the popular vote. [ [http://www.cbc.ca/canada/montreal/story/2007/09/24/charlevoix-byelection.html PQ leader wins byelection in decisive victory ] ]

Marois's campaign signs displayed her image on a blue-green background along with the slogan: "Chez nous, c'est Pauline"." Marois stated at the beginning of the race that she wished to reclaim "nous", showing a return to the PQ's ethnic nationalist beginnings. [ [http://www.canada.com/montrealgazette/news/story.html?id=e3488383-4d5f-49f1-9781-af7c725231a8&p=2 Looks like a cakewalk for Marois ] ]

Canadian tradition holds that in a by-election, a party leader without a seat runs unopposed by other major parties. Also, opposing party leaders traditionally do not campaign in the riding. Marois herself, however, campaigned for a PQ candidate in a by-election against Liberal party leader in 1985, as did PQ leader . [ [http://www.canada.com/montrealgazette/news/story.html?id=84d72cea-19d5-4bd9-87a9-4936b0556054 Dumont campaigns against Marois, pulling political faux pas ] ] [ [http://www.theglobeandmail.com/servlet/story/LAC.20070908.QUEBEC08/TPStory/National globeandmail.com: National ] ]

According to a "" newspaper article, there were questionable actions on the part of Blanchet which led to protected agricultural land being rezoned to permit him to construct a residence, and to parcels of government land being appropriated by the couple for their own private use. Marcel Turcotte was said to have been paid $500 by an agent of Blanchet after he signed an affadavit to the effect that he had occupied an unheated building on the land (not far from his home) 50% of the time, thereby justifying the zoning change application under a grandfather clause. [ [http://www.canada.com/montrealgazette/news/story.html?id=bc089ed0-7ead-4b71-8dea-3759b6994058&k=50395 Marois denies wrongdoing in Ile Bizard property controversy ] ]

Marois' spokeswoman, Christiane Miville-Deschênes, did not explain if Blanchet held a contract or rented or paid charges on the public acreage and at what time and in what manner he received the right of way. According to the borough of , only one area of all government-owned tracts in Île Bizard is rented, and that is a borough-run park. [ [http://www.canada.com/topics/news/politics/story.html?id=8ecc23ff-6293-47a3-be7a-f623c983f483&k=93000 Marois Deal not irregular: PQ ] ]

Marois confirmed in an interview with TVA news anchor and reporter Paul Larocque, that one parcel of land belongs to the Quebec Crown, and denied having received a free pass on the acquisition of it. She also filed a complaint against the newspaper and, along with her husband, later filed a $2 million lawsuit against the "Gazette" and one of their journalists. [ [http://lcn.canoe.ca/lcn/infos/national/archives/2007/09/20070925-162408.html «C'est de l'acharnement à mon endroit!» - LCN - National ] ] [ [http://lcn.canoe.ca/lcn/infos/national/archives/2007/09/20070928-200520.html Pauline Marois et son mari déposent leur poursuite - LCN - National ] ]

Although it was initially covered at some length in the official PQ , all mention of the "chateau" scandal has since disappeared from their site. [ [http://blogue.pq.org/?s=chateau PQ blog] ]

Leader of the Parti Québécois

Immediately after being named the new leader of the party, Marois conducted a major shuffle of the . was named the new house leader, replacing . Lemieux was offered by Marois the position of caucus chair, but refused and indicated her intention to resign her seat of Bourget. [ [http://lcn.canoe.ca/lcn/infos/national/archives/2007/08/20070829-165009.html Un caucus pour préparer la rentrée parlementaire - LCN - National ] ]

Marois stated that the project of holding a referendum on sovereignty would be put on hold indefinitely, indicating that regaining the support of voters for sovereignty would be her main objective. [ [http://www.cbc.ca/canada/ottawa/story/2007/09/25/pq-leadership.html PQ leader to put sovereignty on backburner ] ]

In September 2007, she proposed a strategic plan for helping the forestry sector, which has been hard hit in recent years by the closure of several mills in western and central Quebec. Measures proposed included an increase in protected forest space, an increase of productivity by developing the second and third transformation of wood and incentives to encourage the usage of wood from Quebec for construction projects. [ [http://lcn.canoe.ca//infos/national/archives/2007/09/20070911-171008.html Le PQ propose un plan de relance - LCN - National ] ]

In November 2007, Mario Dumont, in which his party suggested the elimination of school boards, proposed a motion to topple the government in the wake of poor voting turnouts during the school elections on November 4, 2007. The PQ strongly rejected the motion along with the Liberals citing that it was a lack of judgment made by the ADQ leader. Marois added that she was open for a debate on the structural bases of the school boards. [ [http://www.canoe.com/infos/quebeccanada/archives/2007/11/20071107-114756.html] ]

On , , Marois proposed Bill 195, the Quebec Identity Act, which included a requirement that immigrants must learn French in order to obtain rights, including a putative Quebec citizenship and the right to run in elections at all levels. The bill also proposed the fundamental values of Quebec should be taken into account in a future constitution, including equality between sexes and the predominance of French [ [http://lcn.canoe.ca//infos/national/archives/2007/10/20071020-131944.html Pauline Marois fait de l'identité son cheval de bataille - LCN - National ] ] [ [http://www.canada.com/nationalpost/story.html?id=e37f0027-75cb-41c4-81a2-31b43f5c6360 PQ bill supported by Francophones, condemned by Anglophones ] ]

The idea was met with criticism amongst various minority groups. The also dismissed some of the measures as divisive and harmful. House Leader also made a parallel between the proposed bill and 's "" speech following the 1995 referendum, while Cabinet Minister added that it would violate the . Many current and past members of the Parti Québécois also rejected this proposal, including Bernard Landry. [ [http://lcn.canoe.ca/lcn/infos/national/archives/2007/10/20071024-075036.html Bernard Landry rejette le projet Marois - LCN - National ] ] [ [http://lcn.canoe.ca//infos/national/archives/2007/10/20071024-125211.html Pauline Marois maintient le cap - LCN - National ] ]

In April 2008, Marois proposed a major rewrite of , the French Language Charter in light of concerns of the decline of the French language in the province particularly in the Montreal region. Among her proposals included more French courses in elementary and secondary schools, the obligation for new arrivals of learning French and specific measures for some businesses, particularly small ones as well as more power for the Office de la Langue Francaise. [ [http://lcn.canoe.ca/lcn/infos/national/archives/2008/04/20080427-170651.html Marois réclame une refonte de la loi 101 - LCN - National ] ]