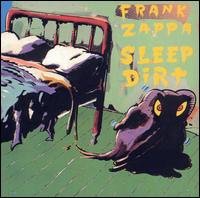 
"Sleep Dirt" is an album by released in January, 1979 on his own label. It reached 175 on the Billboard Pop Albums chart. Zappa's intended title for the album was "Hot Rats III". The title was changed by DiscReets' distributor, in violation of Zappa's contract.

In early 1976 Zappa's relationship with manager and business partner ended in litigation. Zappa and Cohen's company was distributed by Warner Bros. When Zappa asked for a re-assignment of his contract from DiscReet to Warner in order to advance the possibility of being able to do special projects without Cohen's involvement, Warner Bros. briefly agreed. This led to the 1976 release of "" on Warner. At this point Zappa was contractually bound to deliver 4 more albums to DiscReet and Warner.

Early in 1977 Zappa claimed he delivered master tape copies of 4 individual LP's to Warner Bros. (see [http://users.aol.com/biffyshrew/lather.html#links] ) This would have fulfilled all of Zappa's final obligations to DiscReet and Warner and freed him to move to another distributor for his next release. "Zappa In New York" (a 2LP set) was delivered first complete with Zappa approved artwork, followed closely by "Studio Tan", "Sleep Dirt", "Orchestral Favorites" for which Zappa supplied tapes only. Believing that the material was sub-standard, Warner refused to pay Zappa for his production costs upon delivery of the 4 albums (5 discs) according to their contract.

Due to Warner's breach of contract Zappa decided later in 1977 that he was contractually free to reconfigure the material on the 5 discs into a single 4LP set called "". Though both collections contained unique material the 4 disc set was trimmed down from the original 5 disc configuration, not the other way around as has been commonly claimed. While Gail Zappa claims "Läther" was always conceived as a 4 disc set", she was apparently unaware that all the material on the original 5 disc configuration was already recorded between 1971 and 1976, and completed a year before "Läther". "Zappa In New York" was completed and released in 1977. It was later censored and re-sequenced by Warner without Zappa's authorization in 1978.

Despite the official story written much later in 1996 there is no evidence that Zappa ever delivered tapes for "Läther" to Warner. Nor would a single 4LP set have fulfilled the requirements of the Zappa/Warner contract as the 4 disc box would have counted as a one release. (see [http://users.aol.com/biffyshrew/frank.html] ) Zappa created each of the 4 original albums with a unique and consistent musical style of it's own. For "Läther" the individual styles were completely mixed up and the songs were linked with new musical and dialog segments. Trying to create the original 5 disc configuration out of the 4 disc "Läther" compilation would have been like trying to turn an omelette back into eggs. (see [http://users.aol.com/biffyshrew/lather.html#links] )

Zappa then attempted to get a distribution deal with Mercury/Phonogram to release "Läther" on the new Zappa Records label. This led Warner Bros. to threaten legal action, preventing the release of the "Läther" compilation. In 1978 and 1979 Warner finally decided to release the 3 remaining individual albums they still held, "Studio Tan", "Sleep Dirt", and "Orchestra Favorites." As Zappa had delivered the tapes only, the three individual albums were released with no musical credits. (see [http://www.arf.ru/Notes/Ziny/append.html] ) Warner commissioned their own sleeve art by , which was not approved by Zappa.

When this material was first issued on CD Zappa made the decision to re-issue the individual albums, thus strengthening the argument that this was his original artistic intention. The material on the album was made available to the public again when "Läther" was finally officially released to the public in 1996 after Zappa's death.

Zappa had originally envisaged three of the album's tracks ("Flambay", "Spider of Destiny", and "Time Is Money") being used in his (abandoned) Hunchentoot musical, and thus, these songs were intended to have vocals. For the CD reissue of "Sleep Dirt", Thana Harris overdubbed vocals on the aforementioned tracks, and Chad Wackerman overdubbed drums. The original, instrumental versions of these tracks can be found on "Läther" (though "Flambay" was greatly shortened; the full-length instrumental version of that can only be found on the original lp.)

The creature shown on the cover is from the films.

All songs written by Frank Zappa.