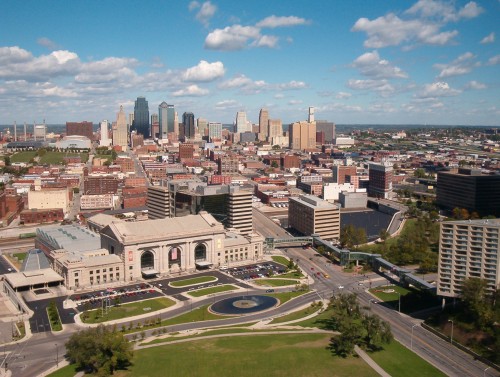 image_caption = A portion of the downtown Kansas City skyline

CBD-Downtown is the central business district of and the . It is located between the in the north, to 31st Street in the south; and from the – state line east to as defined by officials of the Kansas City, Missouri Downtown Council and City Hall.

In recent years, Downtown Kansas City has been undergoing a massive "boom" in renovations and new construction. Since 2000, the estimated cost of these projects has totaled over $4 billion.Fact|date=January 2008

The Power & Light District, also known as the "Entertainment District", is a nine-block area immediately to the south of the Central Business District. Originally to be named "Kansas City Live", the developer - Cordish, Inc. of - decided to name the district after the historic art deco Power & Light Building. The present headquarters of the Kansas City Power & Light Company, a subsidiary of (: GXP), is also located on the northern side of the district. Instead, a one-block area near the new headquarters tower--devoted to live music venues--will be named Kansas City "Live!".

Since the summer of 2006, the building has been open for business. Its prominent oval shape, mixed with blue-green reflective glass, makes for an architectural transition between the Central Business District's skyscrapers and the south loop's older buildings. This ties together a theme of new, glass-walled buildings in the area, also including the and the printing press across I-670.

As well, Cordish plans to build four residential towers in the project. As of Summer 2007, however, only one is nearing construction: a 38 floor 350-unit residential tower which may include a boutique hotel. The site lays immediately north of the H&R Block headquarters on a lot once occupied by the flagship store of the Jones Store Company. In March 2006, the ground was leveled and dug out.

Construction is evident when driving across I-670, as the new Entertainment District practically shares a border with the Interstate. Soon the view will be blocked by the above mentioned residential towers. Enclosed between the residential towers and H&R Block's new Building will be many shops and restaurants, new to the Kansas City area. City leaders hope that the new District will be a major attraction for Kansas City-area residents and visitors to the area, and have a civic impact on Downtown similar to that experienced by other municipalities, such as Baltimore and San Antonio.

The , an 18,500-seat arena, is a project that was announced shortly after the Power & Light District. In 2004, the proposed arena was effectively passed by the voters of all the affected counties, who voted to fund the arena by means of a tax on car rentals and hotels.

This project raised some controversy. , a St. Louis corporation whose majority shareholder is known for supporting an team for St. Louis, lobbied against the tax and tried to sway public opinion against the arena. Some city officials, as well as those who did not desire to pay the increased tax, also fought against the project. One of the most prominent of these individuals was Sandra McFadden-Weaver, a member of the of Kansas City, Missouri. Despite the outcry from a few dissenters, the arena vote passed decidedly.

Construction began late in 2004. Before this, however, and even before the vote, the city sent out a request for local and national architectural firms to bid on the project. Some of these firms included HOK Sports, Ellerbe Beckett, 360 Architecture, Rafael Architects Inc. and the world-renowned . The first four of those firms, however, collaborated to form the "Downtown Arena Design Team", and won the contract over Gehry's bid. As a reason for their choice, the city stated both that those companies had completed a variety of sports-related projects done many projects related to sports, and that all were local companies.

As of August 2007, the arena does not have an NBA or tenant, though the have been purchased by a group led by William "Boots" Delbaggio, who has an agreement with the arena to operate any NHL team that plays there. An NHL expansion franchise is also a rumored possibility.

, having notably expanded over the past decade, has decided to expand yet again. The current project entails a large ballroom facility, situated over I-670's passage through downtown Kansas City just east of the convention center. The project is estimated to cost about $100 million.As of spring 2006, this project is under construction and the building is well on its way to completion.

Kauffman Center for the Performing Arts

A new is under construction south of Bartle Hall Convention Center and its new ballroom. Construction was started on October 6, 2006, and it is scheduled to open in December 2009. Once completed, the will be a convert|316000|sqft|m2|sing=on performing arts center. It will serve the has host to three resident companies: the , , and .

The decided to move from a 21-story tower in the Downtown Loop to a Penn Valley Park location on the southern edge of Downtown, immediately west of on a site formerly occupied by Trinity Lutheran and St. Mary's hospitals. The headquarters will house a 14-story tower surrounded by several smaller two-story and four-story buildings. Construction is underway at the site, and the stonework is already being placed on the facade.

The IRS recently decided to construct a new building downtown, just west of Crown Center, which will house 6,000 employees. Presumably because of the threat of , the IRS decided on this particular site because it is in a low-lying area and will include low-rise buildings. The plan calls for a $200 million facility with 5,500 parking spaces in its accompanying garage, along with over a million square feet of space for the IRS. Construction began in 2004 and should be ready in time for a scheduled completion in the summer of 2006. The IRS will also occupy the nearby Kansas City Main Post Office building, the Post Office having moved across the street to a building next to Union Station. It is currently constructed and operational.

The 120-year-old historic Freight House building in the Crossroads Arts District was renovated in the late 1990s, and it is now home to City Tavern, Lidia’s Kansas City, and . The original plan for the redevelopment included a 21-story hotel and garage; however, the hotel portion of the plan did not materialize at the time, because of then uncertainty about the future redevelopment of downtown.

In August 2007, it was announced that developer Dan Clothier now wants to complete his original plan by adding an 18-story hotel tower atop a three-level garage. The $38 million project calls for the structure to house either 200 hotel rooms or a combination of 160 rooms along with some residential units.

Kansas City's second largest advertising & pr firm , formerly Barkley Evergreen & Partners, moved its 350 plus employees to the former world headquarters at the very southern edge of the district in November 2006. The building has been empty for two decades and cost over 30 million dollars to renovate. Barkley also reconstructed the famous Disney designed three-story rocket ship that had stood atop the building during TWA's tenure. The Moonliner signified one-time TWA majority shareholder Howard Hughes' desire to guide the airline into space travel. Other renovations to the building included a theater, grass-lined rooftop observation deck, open floor plan, and gallery space featuring art from local and national artists. Barkley adopted the rocket ship as its new logo shortly before moving into the renovated TWA space.

This is a list of all currently under construction, proposed, and envisioned developments for Downtown that include residential units, ranging from lofts, to condos, to studios.

The Loop is the north central section of Downtown Kansas City, is the most dense section of the city, and is surrounded on all four sides by the downtown freeway loop. Altogether the Loop has an area of nearly one square mile. In 2006, the Downtown Loop had nearly 8,000 residents. The Downtown Loop encompasses Quality Hill, the Central Business District, the Entertainment District, and the Government District.

* The Library District is an officially designated area roughly bounded by 9th and 11th Streets on the north and south and Main Street and Broadway on the east and west in Downtown Kansas City, MO. The Library District took its new name in 2003 in connection with the move of the 's Central Branch to a building formerly the headquarters of the First National Bank of Kansas City. This area includes the world headquarters of , the Community Bookshelf (which is the exterior of the library's parking garage), and the 10th and Main Transit Plaza, Kansas City's main municipal bus terminal. Originally this area was developed as a commercial and entertainment area in the 1880s, but now contains a large number of loft buildings. Several surface parking lots remain in this area that may in the future be redeveloped into more intensive developments.

* The Garment District is located to the east of Quality Hill, across Broadway Boulevard. In the 1930s several large clothing manufacturers clustered here, making Kansas City's garment district second only to New York City's in size. Today, this heritage is commemorated by an oversize needle and thread monument. Its old industrial buildings have since been redeveloped into loft apartments, office, and restaurants. , father of got his start in 1908 from a stand in an alley in the neighborhood.
* The Government District on the east side of the downtown loop consists of Kansas City's City Hall (the tallest city hall in the United States, at 30 stories), the Jackson County Courthouse, Police Headquarters, the Bolling Federal Building, the U.S. Courthouse, which serves as the seat of the . The government buildings are in walking distance of each other and are centered around Ilus Davis Park.
* The Financial District, includes Kansas City's main s, such as (the tallest habitable structure in Missouri), the , and . The district also includes the headquarters of the KCMO School District and, until the spring of 2008, the . The financial buildings are in walking distance of each other.
* The is a nine-block entertainment district developed by the of , which has been under construction since 2004 and currently is nearing completion. It is situated along the southern edge of the downtown loop, bordered by and Interstate 670 to the south and to the west. It includes , 's new corporate headquarters and the new 18,000 seat , which opened on , .
* The Convention District consists of , Municipal Auditorium, Bartle Hall Convention Center, the Power & Light District, and the Sprint Center. The convention buildings are in walking distance of each other.

, having notably expanded over the past decade, has decided to expand yet again. The current project entails a large ballroom facility, situated over I-670's passage through downtown Kansas City just east of the convention center. The project is estimated to cost about $100 million.As of spring 2006, this project is under construction and the building is well on its way to completion.

Launched by the (KCATA) in July 2005, "MAX" (Metro Area Express) is a (BRT) line extending from downtown through the to Waldo. These buses have GPS receivers so bus stops can give real time data about the next pickup time. All buses have dedicated lanes during rush hour and can hold traffic lights green, if needed, to get back on schedule.

Most other KCATA routes have stops throughout downtown, centered on the Transit Plaza at 10th & Main street and Grand Avenue between 11th and 12th.

On November 7, 2006 Kansas City passed a light rail proposal. Only initial route information is available from the Kansas City Area Transportation Authority as the study will continue into 2009.