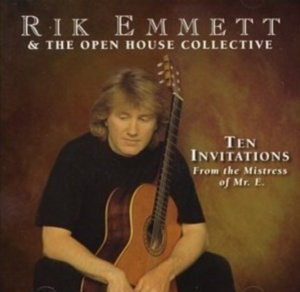 
"Ten Invitations From The Mistress Of Mr. E" is the fourth studio album by the Canadian , released in 1997. It is the first installment in a guitar trilogy, otherwise known as the "Open House Collection" released merely six months before Swing Shift, which is meant to cover the basis of Rik Emmett's guitar teaching.

Unlike the next two albums in the trilogy, the album is completely instrumental.

"Shannon Emmett", Emmett's oldest daughter, plays the synthesizer on the two part suite "Ascending in St. Anne's and Secret Wishes", she was only fourteen at the time...

The album originally consisted of eleven songs, but was later dubbed as Ten Invitations due to their being only ten songs from the album. Emmett stated, on his official site, during the time of release for the album:

"This tune is based on what may be an embroidered fabrication: a bittersweet little confessional from a quiet, lonely old bachelor uncle, told after a few glasses of home-made wine. Back in his village in Italy, he had fallen for a young girl because of the way she used to smile at him, even though he had never spoken to her, and it broke his heart forever when he emigrated to Canada and left her behind. As I wrote this piece, I kept picturing his memories in the warm, soft slo-mo colours of love, Mediterranean style, after being smitten by the lightning bolt of a young girl's beautiful smile."Fact|date=September 2008

* [http://www.rikemmett.com/music.php Ten Invitations From the Mistress Of Mr. E Entry at the Official Rik Emmett Homepage]