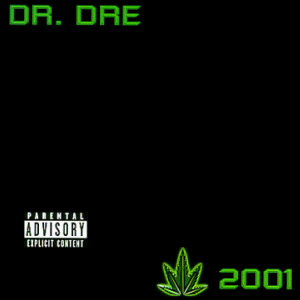 The album has been credited with bringing the scene back to the spotlight after years of obscurity, while showing that Dr. Dre could still remain prominent with a new generation of listeners and viewers. "2001" also further established the career of Eminem, who eventually became one of the best-selling rappers of all time. 2001 debuted at number 2 on the Billboard 200 charts with sales of over 550 000 units.

In a interview with "The New York Times", Dr. Dre talked of his motivation to record the album and how he felt that he had to prove himself to fans and media again after doubts arose over his production and rapping ability. These doubts came from the fact that he did not release a solo studio album since "" (1992). He stated:He went on to speak of how the album was originally intended to be a ; with tracks linked through interludes and turntable effects, but then changed to be set-up like a film,He also talked of how he did not record the album for club or radio play and that he planned the album simply for entertainment with comical aspects throughout:

The album was recorded during 1998 and 1999, following Eminem's release of "", which Dr. Dre acted as an on. This style of production was continued onto "2001", with new, sparse beats and reduced use of samples which were prominent on his debut album.

Josh Tyrangiel of "Time" has described the recording process which Dr. Dre employs, stating "Every Dre track begins the same way, with Dre behind a drum machine in a room full of trusted musicians. (They carry beepers. When he wants to work, they work.) He'll program a beat, then ask the musicians to play along; when Dre hears something he likes, he isolates the player and tells him how to refine the sound."

The album primarily featured co-production between Dr. Dre and and was generally well-received by critics. writer noted that Dr. Dre had expanded on the beats on his previous album, "The Chronic", and stated, "He's pushed himself hard, finding new variations in the formula by adding ominous strings, soulful vocals, and reggae, resulting in fairly interesting recontextualizations" and went on to say "sonically, this is first-rate, straight-up gangsta".

The album also marked the beginning of Dr. Dre's collaboration with keyboardist , who had previously worked with and is credited as a co-writer on several of "2001"'s tracks, including the hit single "". Storch would later go on to become a successful producer in his own right, and has been credited as a co-producer with Dr. Dre on some of his productions since.

The lyrics on the album received criticism and created some controversy. They include many of themes associated with gangsta rap, such as violence, promiscuity, street gangs, drive-by shootings, crime and drug usage. Erlewine said that the only subject matter on the album was "violence, drugs, pussy, bitches, dope, guns, and gangsters" and that these themes have became repetitive and unchanged in the last ten years.

Three singles were released from the album: "", "" and "". "Fuck You", "Let's Get High", "What's The Difference" and "Xxplosive" were not officially released as singles but received some radio airplay which resulted in them charting in the .

"Forgot About Dre" was released as the second single in 2000 and like the previous single, it was a hit on multiple charts. It reached number 25 on the "Billboard" Hot 100, number 14 on the Hot R&B/Hip-Hop Singles & Tracks and number 3 on the .

The album was generally well-received by critics. In ""s "The Immortals - The Greatest Artists of All Time", where Dr. Dre was listed at number 54, talked of how the track "Xxplosive" inspired him: "'Xxplosive', off "2001", that's [where] I got my entire sound from&mdash;if you listen to the track, it's got a soul beat, but it's done with those heavy Dre drums. Listen to "This Can't Be Life," a track I did for Jay-Z's ' album, and then listen to "Xxplosive". It's a direct bite."s Tom Sinclair praised the production, calling it "uncharacteristically sparse sound" from Dr. Dre and that it was as "addictive as it was back when over 3 million record buyers got hooked on "" and Snoop Dogg's Dre-produced "" and went on to commend Dr. Dre, stating, "If any rap producer deserves the title "composer", it's he."

The album also received criticism. Erlewine talked of how the amount of guest rappers affected the album, and questioned his reasons for collaborating with "pedestrian rappers". He claimed that "the album suffers considerably as a result [of these collaborations] ". Erlewine also criticised the lyrics, which he said were repetitive and full of "gangsta clichés".

Big Ego's
*"Theme from the Persuaders" by John Barry
*"" by

The Next Episode
*"The Edge" by and David Axelrod

Let's Get High
*"Backstrokin'" by Fatback