Client (officially stylised as CLIEИT) are an English electronic musical group from London. They are most popular in Germany where they have had limited commercial success. They typically combine airline hostess uniforms or shiny fetish fashion outfits with glamour-girl aesthetics and harsh electronics to create a sound reminiscent of early forays into electronic sound manipulation and New Wave. Their uniforms have become their trademark. 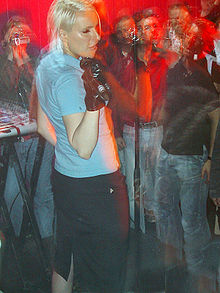 The original band members were formerly known only anonymously as Client A and Client B, to the extent that their faces were not shown on any publicity photos; it has since been revealed that they are, respectively, Kate Holmes, formerly of Frazier Chorus and Technique, and Sarah Blackwood, lead singer of Dubstar. Holmes is married to Alan McGee (founder of Creation Records and discoverer of Oasis). In late 2005 a new member, Client E, joined the group. This is Emily Mann, who was a contestant on the Channel Five reality show Make Me a Supermodel, an artist, and an active DJ, usually performing as Emily Strange. Client E left the band in June 2007. In November 2007 Charlotte Hatherley joined the band as Client C, to fill the vacant role of bassist on their European and Scandinavian tours.

Client was the first act signed to Depeche Mode keyboardist Andy Fletcher's record label, Toast Hawaii. They have toured with the likes of Depeche Mode and Erasure and have been described as a combination of "the Pet Shop Boys at their most commercial and The Human League at their most obscure".[1]

Client have collaborated with several high-profile musicians and directors. Their video for "Pornography" was directed by French director Jamie Deliessche from video production company Schmooze. It features Carl Barât (formerly of The Libertines and Dirty Pretty Things) on vocals. The song "Down to the Underground" features Pete Doherty, also formerly of The Libertines, now frontman of Babyshambles. The song "Overdrive" features Martin L. Gore of Depeche Mode. The song "Where's the Rock and Roll Gone" features Tim Burgess of The Charlatans. Client have collaborated with Die Krupps, Moonbootica and Replica on selected tracks and also have done a special duet, "Suicide Sister" with Douglas McCarthy of Nitzer Ebb.

It was announced in October 2006 that Client left the Toast Hawaii label.[2] In November 2006, Client signed with Out of Line for Europe, SubSpace Communications in Scandinavia, Metropolis Records for North America, Noiselab for South America and their own label Loser Friendly Records in the UK.

In December 2010 it was announced that Blackwood had left the band and a new member was being recruited to front the band.[3]

In June 2011 it was suggested that a best-of album was in the making on Mute Records, consisting of material taken from the band's first two studio albums.[4] Additionally, Holmes announced that Xan Tyler would take over live lead vocals for the band, replacing Blackwood. Holmes and Tyler formed the female synthpop duo Technique in the mid-1990s.[5]

Studio albums
Client · City · Heartland · Command
Compilations
Going Down · Metropolis · Client Megamix · Untitled Remix
Live albums
Live at Club Koko · Live in Porto · Live in Hamburg
Singles
"Price of Love" · "Rock and Roll Machine" · "Here and Now" · "In It for the Money" · "Radio" · "Pornography" · "Lights Go Out" · "Zerox Machine" · "Drive" · "It's Not Over" · "Can You Feel" · "Make Me Believe in You"
Categories: