The common-mode rejection ratio (CMRR) of a differential amplifier (or other device) is the tendency of the devices to reject the input signals common to both input leads. A high CMRR is important in applications where the signal of interest is represented by a small voltage fluctuation superimposed on a (possibly large) voltage offset, or when relevant information is contained in the voltage difference between two signals. (An example is audio transmission over balanced lines.)

where Acm is the common-mode gain, which is typically much smaller than the differential gain.

The CMRR is defined as the ratio of the powers of the differential gain over the common-mode gain, measured in positive decibels (thus using the 20 log rule):

As differential gain should exceed common-mode gain, this will be a positive number, and the higher the better.

The CMRR is a very important specification, as it indicates how much of the common-mode signal will appear in your measurement. The value of the CMRR often depends on signal frequency as well, and must be specified as a function thereof.

It is often important in reducing noise on transmission lines. For example, when measuring the resistance of a thermocouple in a noisy environment, the noise from the environment appears as an offset on both input leads, making it a common-mode voltage signal. The CMRR of the measurement instrument determines the attenuation applied to the offset or noise. 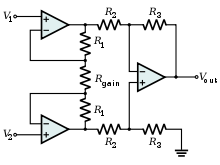 Typical instrumentation amplifier implementation, designed to have a high CMRR.

An operational amplifier (op-amp) has two inputs, V+ and V-, and an open-loop gain G. In the ideal case, the output of an ideal op-amp behaves according to the equation

This equation represents an infinite CMRR: if both inputs fluctuate by the same amount (while maintaining a constant difference V+ - V-), this change will have no bearing on the output. In real applications, this is not always the case: the lower the CMRR, the larger the effect on the output signal, following the general equation

Where VCM represents the common-mode voltage at the inputs, or (V+ + V-)/2.

The 741, a common op-amp chip, has a CMRR of 90 dB, which is reasonable in most cases. A value of 70 dB may be adequate for applications which are insensitive to the effects on amplifier output;some high-end devices may use op-amps with a CMRR of 120 dB or more.

So for example, an op-amp with 90dB CMRR operating with 10V of common-mode will have an output error of ±316uV.