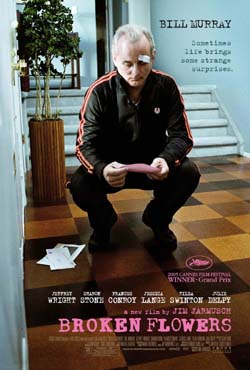 The film is dedicated to French director . In an interview, Jarmusch said he felt close to Eustache for his commitment to making films in a unique and independent fashion.

The main character, Don Johnston (), is a former "" who wants to live in quiet retirement, having made a small fortune in the computer industry. He is content to lounge around watching old movies and listening to classical music. His current girlfriend, Sherry (), is ending their relationship and moving out of his house when a letter in a pink envelope arrives. After she walks out, he reads the letter: it purports to be from an unnamed former girlfriend, informing him that he has a 19-year-old son who may be looking for him. Initially Don doesn't intend to do anything about it, but his busybody neighbor Winston (), who is a mystery novel enthusiast, urges Don to investigate. Winston researches the current locations of the five women most likely to have written the letter, gives Don the information (along with maps, print-outs, and air flight reservations), urges him to visit them, and tells Don that he will drive him to the airport the next morning.

* Laura () works as a closet and drawer organizer and is the of a driver. She has a young daughter Lolita (), a teenager, who flirts with Don and once appears completely naked in front of him.
* Dora () is a . Once a "" of the 1960s, she apparently hasn't been reconciled to her present life: she appears nervous and melancholic. Her husband, Ron (Christopher McDonald), invites Don to an awkward dinner.
* Carmen () works as an "animal communicator." Don recalls how she was formerly so passionate about becoming a lawyer. But "passion is a funny thing," she says. There are also hints that she may be involved in a lesbian relationship with her receptionist ().
* Penny () lives in a rural area amongst tawdry enthusiasts. Having left Don years ago, she doesn't have any desire to reconcile with him now. When Don asks her whether she has a son, she becomes enraged. Don is beaten by her friends as a result.He awakens the next morning in his rental car in the middle of a field. He has a nasty cut around his left eye as a result of the confrontation.

Don then stops at a to buy flowers from a friendly and attractive young woman named Sun Green () who bandages his cut. He leaves the flowers at the grave of the fifth woman, Michelle Pepe, who Don originally thought might be the mother before finding out she had died five years prior. (Earlier Don told Winston he had loved Michelle &mdash; his only mention of love throughout the film.) As he kneels at her gravestone he softly says "Hello, beautiful."

Disillusioned, Don returns home where he meets a young man in the street (Mark Webber) whom he suspects may be his son.He buys him a meal, but when he remarks that the young man believes that Don is his father, the young man becomes upset and flees.

As Don looks on, he notices a drive past. A young man in the passenger seat &mdash; played by Homer Murray, the real-life son of Bill Murray [ [http://www.imdb.com/name/nm1979743/ Homer Murray] at (retrieved on December 14, 2006)] &mdash; is listening to the music which Don himself has been listening to throughout the movie. Both the young man Don buys lunch for and the one in the car are wearing track suits like Don's. The young man in the car holds unblinking eye contact with Don while the car drives on and away. Don is left standing in the middle of the road.

In the end, none of the mysteries posed by the film are resolved.Don ends his journey no closer to discovering which of the women wrote the letter, and there's even a suggestion that Sherry sent the letter to cause Don an existential crisis. It's unclear whether the young man in the Volkswagen is Don's son, or if Don has reached a point where he'll wonder whether every boy he sees might be his son. The last moment has the camera spinning around Don's head (a full 360° rotation) with a blank expression on his face.

"Broken Flowers" opened , in the in a limited release.

In many ways "Broken Flowers" marks a new direction for Jarmusch. The story is relatively fast-paced compared to Jarmusch' previous films. Another big difference with previous films is the fact the protagonist portrayed by Bill Murray is set on a quest and even has found a new goal in life. In many of Jarmusch' films, the protagonists don't have a specific direction and we meet them at a certain, but rather random moment in life. in "Broken Flowers" we meet Don at the moment his girlfriend leaves him and soon after that he reads the letter of a former girlfriend with whom he conceived a child. The quest becomes finding the mother and his son. A third big difference with previous films is the rather fast editing and camera changes, as opposed to the long shots and takes of Jarmusch' previous films. Jarmusch did hire a different cinematographer.

At the , the film was nominated for the "" and won the "Grand Prix".

Other songs in the film

The film's working title was "Dead Flowers" (as seen on the in the "making-of" film in the DVD's extras). Director Jim Jarmusch generated writing what would be on the pink letter, by asking each of the four female leads to write a version of the letter from the point of view of their respective characters. He used an amalgamation of those four letters in the finished film, "using pieces of their own language."

In agreeing to do this film Bill Murray set the conditions that it would only take six weeks and that he was never more than 60 miles from his home in Rockland County, New York.