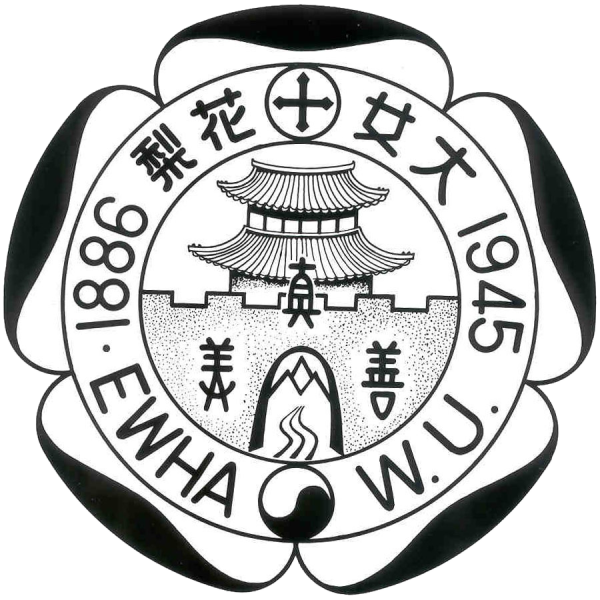 Ewha Womans University (Korean: 이화여자대학교, : 梨花女子大學校) is a private women's university in central , . It is one of the city's largest institutions of higher learning and also the world's largest female educational institute. It also is one of the best-known universities in South Korea, and often considered to be the top women's university. Ewha was founded in 1886 by the American Methodist Episcopal missionary .

The school flower is the , the Sino-Korean term for which is the school's name. While there may seem to be two grammatical errors in the name, "womans" was the correct English spelling in the late nineteenth century when the university was founded (as opposed to women's). The absence of the is an error which the institution has kept for historical reasons.

Ewha Womans University traces its roots back to 's Ihwa Hakdang (also Ewha Hakdang; 이화학당 梨花學堂) mission school for girls, which opened with only one student on , (Lee, 2001). [Lee Jeong-kyu. (2001). The establishment of modern universities in Korea and their implications for Korean education policies. In [http://epaa.asu.edu/epaa/v9n27.html "Education Policy Analysis Archives 9" (27)] ] The name, which means “Pear blossom academy”, was bestowed by the Emperor Gojong the following year. The school began to provide college courses in 1910, and professional courses for women in 1925. Immediately following liberation of Korea on , , the college received government permission to become a university. It was the first South Korean university to be officially organized.

Ewha is now responsible for many firsts in Korean history: Korea's first female doctor, Esther Park; its first woman to get a doctoral degree, Helen Kim (who later became the university's first Korean president); the first female Korean lawyer, Lee Tai-young; the first female justice on the Constitutional Court, Jeon Hyo-sook, and the first female prime minister, Han Myeong-sook, were all Ewha graduates. The "firsts" is in part due to the fact that many Korean women in older generations were discouraged from attending co-ed universities in Korea. Ewha's zeal to remain at the vanguard of women's education in Korea is encapsulated in its new motto, "Frontier Ewha."

1886 - In May, , an American Methodist missionary, opens Korea's first school for women in her house with a single student. In November, the construction of a school building (the former base of Ewha Womans University) is completed in Jeong-dong.

Starting from the 19th century, Ewha has so far graduated a total of 170 thousand graduates. It has made an indelible mark as the foremost women's educational institution. Initiative Ewha is a plan that will carry Ewha into the new century and make it grow into a globally recognized institution of higher education. Admission to Ewha Womans University is selective. According to the Joongang Daily's ranking of universities in Korea, Ewha Womans University was ranked 9th in 2003 and most recently, 8th in 2007. However, the university has been ranked within the top 3 in the NCSI (National Consumer Satisfaction Index) University rankings for 4 consecutive years. Ewha also topped the KCUE's(Korean Council for University Education) 2005 University General Assessment List.

-nationwide
*15 out of 32 female ministers graduated from Ewha /46.8%
*17 out of 40 female members of the 17th parliament graduated from Ewha / 32.5%
*Ewha ranks 5th in the nation for the number of graduates passing the judicial, civil, and foreign officers examinations. (2007)
*Ewha produced 2nd largest number of professional women leaders. (2005)
*Ranked first among universities on the National Customer Satisfaction Index (NSCI) in the overall evaluation category (1995, 2005)

The undergraduate departments of Ewha are divided among 11 colleges with 65 departments. Likewise, the graduate courses are divided into 13 graduate schools.
*College of Liberal Arts
*College of Social Sciences
*College of Engineering
*College of Natural Sciences
*College of Arts (Music/Fine Arts/Design)
*College of Law
*College of Pharmacy
*College of Education
*College of Business Administration
*College of Health Sciences
*Scranton College (Honors Program, International Studies)Scranton College opened its doors on March 1, 2007. The College was named after Mary F. Scranton, the missionary who founded Ewha 120 years ago. As a unique program that stands at the core of ‘Global Ewha 2010 Project,’ Scranton College is designed to educate our students and enable them to become effective leaders in a globalized world. There are two main programs in the College: the Scranton Honors Program which encompasses a multitude of disciplines, and the Division of International Studies which is specifically aimed at equipping students with the capacity to compete in the global arena. Scranton offers comprehensive interdisciplinary courses which allow more freedom, creativity, and individuality to students. Small-sized classes conducted in English and the study-abroad programs aim to equip students with an open, flexible mindset and broader scholastic view required in the age of globalization. The Division of International Studies (DIS) was first established in March 2001 as an undergraduate program where English is the language of instruction. It was the first-of-its-kind to be established in Korea. Now, as part of Scranton College, DIS provides individualized curricula for the students in order to help them gain international expertise in their area of choice.

Twelve out of the 25 female ministers since national independence and one third of the 17 female National Assembly members are graduates of Ewha Womans University.Fact|date=August 2008