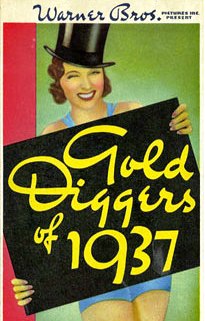 "Gold Diggers of 1937" is a fy|1936 movie musical directed by with musical numbers created and directed by , and starring and , who were married at the time, and . The film features songs by the teams of and E.Y. Harburg and and , and was based on the play "Sweet Mystery of Life" by , [ went on to write such James Bond films as (fy|1963) and (fy|1964).] Michael Wallach and George Haight, which ran very briefly on Broadway in 1935. [IBDB [http://ibdb.com/production.asp?ID=11999 Sweet Mystery of Life] ] wrote the screenplay, apparently with the assistance of , who's billed as "Screenplay constructor".

"Gold Diggers of 1937" was the fourth in Warner Bros.' series of "Gold Digger" films, following "" (fy|1929), which is now lost, "", which was a remake of the earlier film, and the first to feature Busby Berkeley's extravagant production numbers, and "". [Warners also released a silent film, "The Gold Diggers", in fy|1923, based on the same play that was used as source material for "Gold Diggers of Broadway" and "Gold Diggers of 1933".] It would be followed by "" (fy|1938).

Meek, aging, hypochondriac stage producer J.J. Hobart (), who always thinks he is about to die, is going to mount a new show, but his partners Morty Wethered () and Tom Hugo () lost the money for the show in the stock market. On the advice of chorus girl Genevieve Larkin (), they insure J.J. for a million dollars, so that when he dies, they will have the money they need to produce the show. Genevieve's friend, ex-chorus girl Norma Perry () is sweet on insurance salesman Rosmer "Rossi" Peck (), and he writes the policy.

When Rossi's boss, Andy Callahan () finds out how old J.J. is , he is afraid he wil not pass the physical, but when Hobart does, Rossi decides he has to keep J.J. alive as long as possible, to reap the rewards of his sale. On the other hand, Morty and Hugo have everything to gain if J.J. dies, and they try to help things along. When that fails, they talk Genevieve into seducing J.J., but she ends up falling in love with him instead. Rossi finds out the reason for the insurance policy, and talks his boss, Callahan, into investing in J.J.'s show, to save the company the money it would have to pay if J.J. dropped dead after learning he was broke and could not put on the show. When the show is a success Genevieve and J.J. get married, and so do Norma and Rossi. [IMDB [http://imdb.com/title/tt0027686/plotsummary Plot Summary] , TCM [http://www.tcm.com/tcmdb/title.jsp?stid=76604&category=Full%20Synopsis Full Synopsis] ]

;Cast notes
* has an uncredited bit part as a chorus girl who says "Girls, we're saved!

The production numbers were created, designed, staged and directed by . Originally, all the songs for the film was to have been written by and E.Y. "Yip" Harburg, but Berkeley was dissatisfied and brought in and , who has contributed songs to his previous Warner Bros. films. Their song "With Plenty of Money and You", which was subtitled "The Gold Diggers' Lullaby" became a hit.

Although Busby Berkeley had directed "Gold Diggers of 1935", for this film the director's chair was occupied by Lloyd Bacon, who had collaborated with Berkeley on 42nd Street. "Gold Diggers of 1937" marked Victor Moore's return to the screen after a two-year absence following "Gift of Gab", during which he starred in "" on Broadway. [IBDB [http://ibdb.com/person.asp?ID=53589 Victor Moore] ]

The film was in production at Warner Bros. Burbank studio beginning in mid-July 1936, and premiered on 1936. It went into general release two days later. [IMDB [http://imdb.com/title/tt0027686/releaseinfo Release Dates] ]

In fy|1937, Busby Berkeley was nominated for an for Best Dance Direction for the "All's Fair in Love and War" production number. [IMDB [http://imdb.com/title/tt0027686/awards Awards] ]