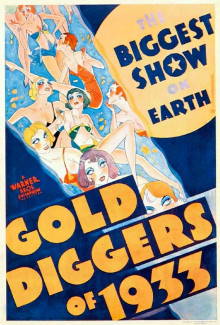 In 2003, "Gold Diggers of 1933" was selected for preservation in the United States by the as being "culturally, historically, or aesthetically significant".

The film was made in fy|1933 at the nadir of the and contains numerous direct references to it. In fact, it begins with a rehearsal for a stage show, which is interrupted by the producer's s who close down the show because of unpaid bills.

At the unglamorous apartment shared by three of the four actresses (Polly, Carol, and Trixie), the producer, Barney Hopkins (Ned Sparks), is in despair because he has everything he needs to put on a show, except money. Then he accidentally hears Brad Roberts (Dick Powell), the girls' neighbor and Polly's boyfriend, playing the piano. Brad is a brilliant songwriter and singer who not only has written the music for a show, but also offers Hopkins $15,000 in cash to back the production. Of course, they all think he's pulling their legs, but he insists that he's serious &ndash; he'll back the show, but he refuses to perform in it, despite his talent and voice.

Brad comes through with the money and the show goes into production, but the girls are suspicious that he must be a criminal since he is cagey about his past, and will not appear in the show, even though he is clearly more talented than the aging juvenile lead they've hired. It turns out, however, that Brad is in fact a millionaire's son whose family does not want him associating with the theatre. On opening night, in order to save the show when the juvenile can't perform (due to his acting up), Brad is forced to play the lead role.

With the resulting publicity, Brad's brother, J. Lawrence Bradford () and the family lawyer, Fanuel H. Peabody () discover what he is doing, and arrive in New York to prevent him from being seduced by "gold diggers." Their goal is to break up the romance between Brad and Polly.

Lawrence mistakes Carol for Polly, and his heavy-handed effort to dissuade the "cheap and vulgar" showgirl from marrying Brad by buying her off annoys her so much that she goes along with the gag in order to eventually pull the rug out from under him. Trixie meanwhile targets "Fanny" the lawyer as the perfect rich sap ripe for exploitation. But what starts as gold-digging turns into something else, and when the dust settles, Carol and Lawrence are in love and Trixie marries Fanuel, while Brad is free to marry Polly after all. All the "gold diggers" (except Fay) end up married to wealthy men.

Cast notes:
* Character actors and appear in small roles, as does choreographer Busby Berkeley (as a backstage call boy who yells "Everybody on stage for the 'Forgotten Man' number."). makes one of her myriad appearances as a maid. [TCM [http://www.tcm.com/tcmdb/title.jsp?stid=3463&category=Full%20Credits Full Credits] ]

The film contains four song and dance sequences designed, staged and choreographed by Busby Berkeley. All the songs were written by Harry Warren and Al Dubin. [TCM [http://www.tcm.com/tcmdb/title.jsp?stid=3463&category=Music Music] ] (In the film, when producer Barney Hopkins hears Brad's music he picks up the phone and says: "Cancel my contract with Warren and Dubin!")

"" is sung by Ginger Rogers accompanied by scantily-clad showgirls dancing with giant coins. Rogers sings one verse in .

"" is sung by Ruby Keeler and Dick Powell. It includes a from Keeler and a surreal sequence featuring dwarf actor Billy Barty as a baby who escapes from his stroller. During the number, the women get caught in a rainstorm and go behind a backlit screen to remove their wet clothes in silhouette. They emerge in metal garments, which thwart the men's attempts to get them off, until Billy Barty gives Dick Powell a can opener. This number was originally planned to end the film.

"The Shadow Waltz" is sung by Powell and Keeler. It features a dance by Keeler, Rogers, and many female violinists with neon-tubed violins that glow in the dark. Berkeley got the idea for this number from a vaudeville act he once saw - the neon on the violins was an afterthought. An earthquake hit Burbank while this number was being filmed:

[it] caused a blackout and short-circuited some of the dancing violins. Berkeley was almost thrown from the camera boom, dangling by one hand until he could pull himself back up. He yelled for the girls, many of whom were on a convert|30|ft|m|sing=on-high platform, to sit down until technicians could get the soundstage doors open and let in some light.

"Remember My Forgotten Man" is sung by Joan Blondell and Etta Moten and features sets influenced by and a gritty evocation of Depression-era poverty. Berkeley was inspired by the May 1932 war veterans march on Washington, D.C. When the number was finished, and (the studio production head) were so impressed that they ordered it moved to the end of the film, displacing "Pettin' in the Park".

An additional production number was planned, but didn't make it into the film: "I've Got to Sing a Torch Song" was to have been sung by Ginger Rogers, but instead appears in the film sung by Dick Powell near the beginning.

"Gold Diggers of 1933" was originally to be called "High Life", and was an early casting idea for the role played by Warren William. It was made for an estimated $433,000, [IMDB [http://imdb.com/title/tt0024069/business Business Data] ] at Warner Bros. studios in Burbank, and went into general release on 1933.

In 1934, the film was nominated for an Oscar for Best Sound Recording for Nathan Levinson, the film's sound director.