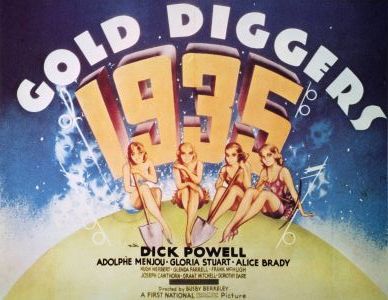 "Gold Diggers of 1935" is a movie musical directed and choregraphed by and starring , , , Winifred Shaw, , and . The film is best known for the famous "Lullaby of Broadway" production number, which features Shaw singing the song which won (music) and (lyrics) an .

In the resort of Lake Waxapahachie, the swanky Wentworth Plaza is where the rich all congregate, and where the tips flow like wine. Handsome Dick Curtis (Dick Powell) is working his way through medical school as a desk clerk, and when rich, penny-pinching Mrs. Prentiss (Alice Brady) offers to pay him to escort her daughter Ann (Gloria Stuart) for the summer, Dick can't say no - even his fiancee, Arline Davis (Dorothy Dare) thinks he should do it. Mrs. Prentiss wants Ann to marry eccentric middle-aged millionaire T. Mosley Thorpe (Hugh Herbert), who's a world-renowned expert on snuffboxes, but Ann has other ideas. Meanwhile her brother, Humbolt (Frank McHugh) has a weakness for a pretty face: he's been married and bought out of trouble by his mother several times.

Every summer, Mrs. Prentiss produces a charity show for the "Milk Fund", and this year she hires the flamboyant and conniving Russian dance director Nicolai Nicoleff (Adolphe Menjou) to direct the show. The parsimonious Mrs. Prentiss wants to spend the least amount possible, but Nicoleff and his set designer Schultz (Joseph Cawthorn) want to be as extravagant as they can, so they can rake off more money for themselves, and for the hotel manager (Louis Lamson) and the hotel stenographer (Glenda Farrell), who's blackmailing the hapless snuffbox fancier Thorpe.

Of course, Dick and Ann fall in love, Humbolt marries Arline, and the show ends up costing Mrs. Prentiss an arm and a leg, but in the end she realizes that having a doctor in the family will save money in the long run.

The songs in "Gold Diggers of 1935" were written by (music) and (lyrics), and the two production numbers were staged by .

"I'm Going Shopping with You," - Sung by Dick Powell to Gloria Stuart, this is a montage of scenes of Stuart shopping for everything from lingere to jewelry, much to the dismay of her penny-pinching mother, Alice Brady.

"The Words Are in My Heart" - This elaborate Busby Berkeley production number utilized 56 white grand pianos, which were moved around the sound stage by male dancers underneath the piano-shells, dressed in black.

"Lullaby of Broadway" - One of the most famous Busby Berkeley numbers is actually a short film-within-a-film, which tells the story of a Broadway Baby who plays all night and sleeps all day. It opens with a head shot of singer Wini Shaw against a black background, then the camera pulls back and up, and Shaw's head becomes the Big Apple, New York City. As everyone rushes off to work, Shaw returns home from her night's carousing and goes to sleep. When she awakens, that night, we follow her and her beau (Dick Powell) from club to club, with elaborate large cast tap numbers, until she is pushed off a balcony to her death. The sequence ends with a return to Shaw's head, as she sings the end of the song.

"Gold Diggers of 1935" was in production at Warner Bros. Burbank studios until fy|1935, and was released on of that year. During production a chorus dancer, Jack Grieves, died on the set due to acute indigestion.

The film was Busby Berkeley's first time at the helm of a film as the official director, although he had his own unit at Warners to do the elaborate production numbers he conceived, designed, staged and directed, which were the major elements of the Warners musicals of that period.