The Commission on Elections, or COMELEC, is one of the three constitutional commissions of the Philippines. Its principal role is to enforce all laws and regulations relative to the conduct of elections, initiatives, referendums, and recalls.

Functions of the Commission

Under the Constitution, the Commission on Elections is independent of the Executive, Legislative and Judicial branches of the Philippine Government. It has the following functions: 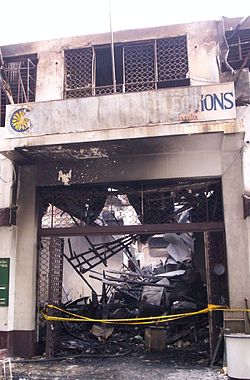 The old Comelec building after being razed by fire on March 11, 2007.

The Commission Proper is the policy-making body composed of the Chairman and six Commissioners who must be natural-born citizens of the Philippines; at least thirty-five years of age at the time of their appointment; holders of a college degree, with a majority of them, including the Chairman, members of the Philippine Bar who have been engaged in the practice of law for at least ten (10) years; and must not have been a candidate for any elective position in the immediate preceding elections [Article IX-C, Section 1, 1987 Constitution]. The Chairman and the Commissioners are appointed by the President, with the consent of the Commission on Appointments.n They hold office for seven years, without reappointment.

The Commissioners exercise quasi-legislative and quasi-judicial functions either en banc or in division. They also perform such other functions as may be assigned by the Commission or the Chairman.

The Chairman acts as the Presiding Officer and Chief Executive Officer of the Commission. He directs and supervises the operations and internal administration of the Commission in accordance with its policies, rules and regulations.

Offices of the Commission

Assisting the Commission are the Executive Director, Deputy Executive Directors for Administration and Operations, nine Department offices, 17 Regional Election Directors, 81 Provincial Election Supervisors and Election Officers in cities and municipalities. Comelec has a complement of more than 5,000 employees. 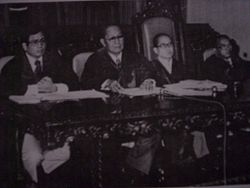 The 1978 Commission is composed of [from left] Commissioners Flores A. Bayot, Venancio Duque, Chairman Leonardo Perez, Commissioners Domingo Pabalete and Vicente Santiago (not in the photo).

The Commission on Elections (Comelec) was created by a 1940 amendment to the 1935 Constitution of the Philippines. Before the creation of the Comelec, supervision over the conduct of elections was vested by law in the Secretary of Interior. The Secretary of Interior saw to it that local authorities performed the ministerial duties assigned to them by the Election Code. He decides administrative questions concerning elections. The courts, however, exercised exclusive and final jurisdiction over questions affecting the right to vote as well as contested elections of local elective officials. Elections contests involving members of the National Assembly were judged solely by an Electoral Commission composed of three justices of the Supreme Court and six members of the National Assembly.

In view, however, of the close official ties between the President and the Secretary of Interior, there was always the danger of a partisan Secretary of the Interior exploiting his powers and influence to ensure the victory of his party at the polls.

The Chairman and Members of the Commission had a fixed term of nine years each - a member being replaced every three years except in the first Commission. They could be removed from office only by impeachment. They were provided with fixed salaries which could neither be increased nor diminished during their term of office. These were safeguards to ensure the independence of the Commission.

The administrative control of elections exercised by the Secretary of Interior was transferred to the Commission on Elections. The Commission was vested with the exclusive charge of enforcing and administering all laws relative to elections and power to decide all questions affecting elections, except those involving the right to vote, which were left to final judicial determination. The courts and electoral tribunals retained their original powers over election contests.

The 1973 Constitution enlarged the membership of the Commission from three to nine members but reduced their term of office from nine years to seven years. As in the 1935 Constitution, the Chairman and Commissioners have staggered terms of office and could be removed from office only by impeachment.

First to serve in the Commission on Elections under the 1973 Constitution were former Senator Leonardo B. Perez, as Chairman, and Venacio S. Duque, Flores A. Bayot, Jose M. Mendoza, Fernando R. Veloso, Lininding Pangandaman, Venancio L. Yaneza and Casimiro R. Madarang, Jr. as Commissioners. Commissioner Pangandaman, the first Muslim Commissioner of the Comelec, was appointed Ambassador by President Ferdinand Marcos even before the expiration of his term. His unexpired term was taken over by Commissioner Hashim R. Abubakar.

On May 17, 1980, Chairman Perez (who was later appointed Minister on Political Affairs by President Marcos) and Commissioners Duque and Bayot, after completing their seven-years term, retired. Commissioner Santiago succeeded Perez, and the following were appointed Commissioners: Domingo C. Pabalete; Victorino A. Savellano; Jaime C. Opinion; Noli Sagadraca; Romeo Firme: Luis Lardizabal and Ide C. Tillah. With Commissioner Lardizabal the membership of the Commission was thus increased to eight, one short of the full complement of nine.

Upon the retirement of Commissioners Firme, Tillah and Lardizabal on May 17, 1983 the Commission on Elections was composed of only five members.

With the retirement of Chairman Santiago and Commissioners Pabalete and Sagadraca on May 17, 1984, Savellano was appointed Chairman.

On January 31, 1986 Commissioners Ruben C. Agpalo and Jaime Layosa were appointed to finally complete the required membership of nine.

After the tumultuous February 7, 1986 snap elections and the People Power Revolution, Chairman Savellano and all the Commissioners of the Comelec tendered their courtesy resignations which, except those of Commissioners Bacungan and Felipe, were accepted by President Corazon C. Aquino.

On April 11, 1986 Commissioner Felipe was appointed Acting Chairman. On July 23, 1986 he took his oath of office as permanent Chairman, together with Commissioners Leopoldo Africa, Haydee Yorac, Andres Flores, Anacleto Badoy, and Dario Rama as members of the "new" Commission on Elections.

On June 6, 1991 Christian Monsod was appointed by President Aquino as Chairman of the Commission to serve the unexpired term of Davide.

On January 11, 1999 President Estrada appointed Sandiganbayan Justice Harriet Demetriou as Chairman of the Commission. After the events of January 2001 that led to the ouster of President Estrada from power, Demetriou tendered her courtesy resignation which was accepted by President Gloria Macapagal-Arroyo.

On January 26, 2008, Gloria Macapagal-Arroyo appointed former Supreme Court Associate Justice Jose Melo, 77, to replace Chair Abalos.[1] The United Opposition (Koalisyon ng Nagkakaisang Pilipino) opposed Melo's appointment.[2] But Melo needs to be confirmed by the Commission on Appointments (CA), so Commissioner Romeo A. Brawner was appointed ad interim Acting Chairman on February 2, 2008 and will stay as Chairman until Melo is confirmed by the CA.

On March 25, 2008, former Supreme Court justice Jose Melo was sworn in as new chairman of the Commission on Elections (Comelec) by acting Chair Romeo A. Brawner. Melo's ad interim appointment (Congress is not in session) was sent by the Malacañan to the Commission on Appointments.[3]

On May 29, 2008, Romeo A. Brawner died from a massive heart attack. Brawner, appointed to the Comelec to replace the controversial Virgilio Garcillano, was supposed to end his term on February 2, 2011.[4]

In August 2007, Nueva Vizcaya Rep. Carlos Padilla delivered a privilege speech alleging that Abalos brokered for the national broadband network (NBN) project. Padilla claimed that Abalos met with officials of the Chinese firm ZTE Corp., which got the US $329 million contract for the broadband project.

Abalos denied brokering for the National Broadband Network project despite admitting he knows some officials in ZTE Corp. He admitted making four trips to China and playing golf there. He also admitted that ZTE officials, whom he says are his golf buddies, hosted and paid for the trips.

Abalos was mentioned in the "Hello Garci" tape, which refers to the alleged wiretapped conversations where vote rigging in the 2004 elections was discussed by, among others, a woman presumed to be President Arroyo and man presumed to be Comelec Commissioner Virgilio Garcillano.

Abalos was the Comelec chair when the election body approved a P1.3-billion contract with the Mega Pacific Consortium for the purchase of automated counting machines, which the Supreme Court in January 2004 declared as void because of "clear violation of law and jurisprudence" and "reckless disregard of [Comelec's] own bidding rules and procedure."

On January 21, 2004, Pimentel filed criminal and administrative charges before the Ombudsman against Abalos and other commissioners in connection with the deal. Abalos described the charges as a "demolition job."

Pimentel accused Abalos and the other commissioners of committing an act of impropriety when they and their wives traveled to Seoul, South Korea to visit the plant of the maker of the counting machines a few months before the bidding for the contract started. Pimentel said he received information that the Korean company paid for the plane tickets and hotel accommodations for the trip.

However, Abalos claimed that the expenses for the trip were paid for out of the P1 million he won in a golf tournament in Wack Wack.

On September 27, 2006, the Ombudsman, in a resolution, absolved all respondents involved in the Mega Pacific controversy of all administrative and criminal liabilities "for lack of probable cause." It also reversed its June 28 resolution which contained factual findings that can be used by the House of Representatives to initiate impeachment proceedings against Comelec Commissioner Resureccion Borra.

Members of the Commission (1940-present)