For a trailer that has two drops in the deck to get low to the ground, see Lowboy (trailer). 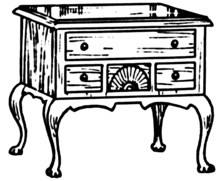 A lowboy is a small table with one or two rows of drawers, so called in contradistinction to the tallboy or highboy chest of drawers. Both were favourite pieces of the 18th century, both in England and in the United States; the lowboy was most frequently used as a dressing-table (and called a dressing-table in Britain), but sometimes as a side-table. It is usually made of oak, walnut or mahogany, with the drawerfronts mounted with brass pulls and escutcheons. The more elegant examples in the Queen Anne, early Georgian, and Chippendale styles often have cabriole legs, carved knees, and slipper or claw-and-ball feet. The fronts of some examples also are sculpted with the scallop-shell motif beneath the centre drawer.

A vanity is a form of lowboy usually equipped with a mirror, used for applying makeup or other fashion.