Silhouette of the Dângrêk Mountains, looking north from Cambodia at dawn. 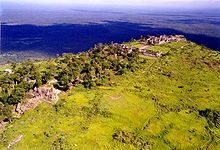 The Preah Vihear Temple area, located on the shoulder of one of the Dângrêk Mountains. 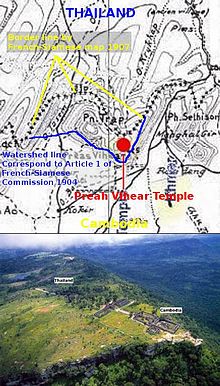 The Dângrêk are a relatively low mountain system, their average elevation being around 500 m. The highest summits are Phalan Sun (670 m), Phanom Ai Nak (638 m), and an unconspicuous 753 m high place at the eastern end, in the Chong Bok area, where the borders of Thailand, Laos and Cambodia intersect.[1]

The mountain range extends in an east to west direction, forming the southern edge of the Khorat Plateau. They stretch for 320 km from the Mekong River until they merge with the highlands of the Sankamphaeng Range, the southern arm of the Dong Phaya Yen Mountains in Thailand.

The northern side of the Dângrêk Mountains is gently sloping, while the sides facing southward are usually a steep escarpment that dominates the plain of northern Cambodia. The watershed along the escarpment in general terms marks the boundary between Thailand and Cambodia however there are exceptions. The main road connecting the two countries in this area cuts through a pass in the Dangrek Mountains at O Smach.

The mountains are mainly formed of massive sandstone with slate and silt. A few characteristic basalt hills, like Dong Chan Yai (293 m) and Dong Chan Noi (290 m) are located on the northern side of the mountain chain in the Ubon Ratchathani Province.

The Dângrêk Mountain range is mostly covered by dry evergreen forest, mixed dipterocarp forest, and deciduous dipterocarp forest. Tree species like Pterocarpus macrocarpus, Shorea siamensis and Xylia xylocarpa var. kerrii dominate. There has been much illegal logging both on the Thai as well as on the Cambodian side, leaving large hill stretches denuded. Forest fires are also common in the hills during the dry season.[2]

There is not much wildlife in the Dângrêk Mountains. Wild hog, deer, barking deer, rabbit, squirrel, gibbon and civet are some of the animals to be found in the areas where there has been no habitat loss due to human encroachment.

The Dângrêk Mountains mountains were part of the ancient Khmer Empire, which spread northwards across them, culminating with the almost complete control of the Isaan area in 1220 under Jayavarman VII.[3] Among the archaeological remains in the mountain area there are stone carvings on the Pha Mo I-Daeng cliff, ancient stone-cutting quarries, as well as the Sa Trao reservoir. There are also remains of sanctuaries that were built as homes to spirits called Phi Ton Nam (watershed spirits) in different spots along the border area of the Dângrêk mountain chain. However, the largest and most important archaeological site in these mountains is the Prasat Preah Vihear compound, a Shaivite temple of the Khmer imperial times dated from the reign of Suryavarman II (1002-49) in a dramatic location on top of a high hill.[4]

In 1975, the final area held by the ill-fated Khmer Republic in any form would be the Preah Vihear Temple in these mountains. FANK forces occupied the place for a few weeks in late April that year, after the fall of the ineffective and beleaguered Lon Nol regime.[5] The hill where the temple stands was finally taken by the Khmer Rouge on 22 May.

Between 1975 and 1979 many Cambodians fled the violence in their country across these mountains. In one of the worst cases of enforced repatriation in UN history, the Thai military forcefully sent as many as 40,000 refugees back into Cambodia often through heavily mined areas despite their unwillingness to return. Many would die of lack of food and exposure in the mountains. To compound matters, there were also bandits hiding in the forests preying on the refugees. At that time there were many corpses, lying rotting unburied, strewn about the Dângrêk Mountains.[6][7]

In the 1984 movie The Killing Fields, the Dângrêk Mountains are the final escarpment that Pran, portrayed by actor Haing S. Ngor, climbs in order to reach the safety of the refugee camp across the border in Thailand. The contrast between the steep-faced Cambodian side and the smooth northern slope of the cordillera is well displayed in this movie.

Even though some areas have been cleared, vast numbers of landmines were laid by the People's Republic of Kampuchea government in the 1980s as part of a huge planned operation using thousands of conscripted workers along the Dângrêk mountain range and other parts of the Thai Cambodian Border. The alleged purpose was to hinder Pol Pot and the Khmer Rouge from entering Cambodia from Thailand. This defensive line, part of the legacy of the violent conflicts that engulfed Cambodia in the latter part of the 20th century, is known as the K-5 Belt.

After the end of the Vietnamese occupation of Cambodia in 1989 and the withdrawal of the Vietnam People's Army, the Khmer Rouge rebuilt their former bases in the Dângrêk mountain range area, along the border of Cambodia in order to fight against the CPAF, the armed forces of the State of Cambodia. Anlong Veng, a small town at the foot of these hills, became for a while the main "capital" of the Khmer Rouge. In the 1990s the Khmer Rouge still controlled Anlong Veng, where there was one of the first "Killing Fields" after the fall of "Democratic Kampuchea".

There is a still not excavated site in a forest with landmines in the Dângrêk Mountains, located about 6 km out of Anlong Veng where 3,000 people were allegedly killed by the Khmer Rouge for having become "corrupted" as late as between 1993 and 1997. These executions were carried out during Ta Mok's leadership in the area.[8]

In 1959, The Thai military seized the ancient Khmer Preah Vihear temple from Cambodia. In 1962 Cambodia gained worldwide recognition for sovereignty from the International Court. Recently the issue of Cambodian sovereignty in the Cambodian–Thai border dispute has been used by certain nationalist factions in Thailand as a tool to help discredit the current Thai government as part of the continuing power struggle within Thailand.[citation needed]