Walton High School was a secondary school located in the Kingsbridge neighborhood of the Bronx borough in New York.

Walton's colors were sky blue and white. Its motto Semper Fidelis means "always faithful".[citation needed] The school seal is an open book supported by the torch of learning, and the school crest contains the head of Athena, Greek goddess of wisdom. The wildcat is the mascot used by the Walton's sports teams.

The building is in the same neighborhood as the Bronx High School of Science and DeWitt Clinton High School. From the mid-1980s to its closing in 2008 it was one of the lower-performing high schools in the city. Walton was operated by the New York City Department of Education. The building now houses a host of mini-schools for academic support.

Walton High School is named after Mary Walton, a wife of General Lewis Morris, a member of the continental congress and a signer of the Declaration of Independence and the U.S. Constitution, as well as one of the first members of New York State's Board of Regents. Mary Walton was the mother of ten children, four of whom fought in the American Revolutionary War. The Walton and the Morris families owned land in the west Bronx from the 17th until the 19th century. Mary Walton operated a "dame school", teaching little girls of the colonial period to read, write, do basic mathematics, and keep house. Mary Walton was buried next to Saint Ann's Church in the South Bronx.

Mary A. Conlon, an elementary school principal of P.S. 30 (located next to Mary Walton's burial place), founded Walton as one of the first all-girl schools in New York City. The New York City Board of Education accredited Walton as an all-girl high school on April 19, 1923. The first graduation took place in January 1926 with 126 girls. 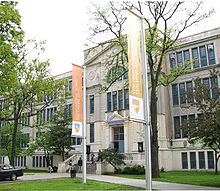 In 1930 the current building on Jerome Avenue and West 195th Street was constructed as Walton's new home, using the same structural design as Abraham Lincoln High School and Samuel J. Tilden High School, both in Brooklyn. The school moved to its new home in1932. Conlon continued as principal until her death in 1936, when Marion Cahil Heffernan took over.

Walton was a prestigious all-girl institution throughout much of its history, with a high graduation rate. Its students were often inducted into the Arista honor society. Many of Walton's graduates went on to Ivy League colleges and universities. For many years the school's yearbook was named the Periwinkle, a small blue flower. With the change in demographics of the surrounding neighborhoods came the change in the overall level of excellence for which Walton had been known. The demise and eventual closing of this school saddened those who remembered Walton as it was.

In 1966 the school appointed its first male principal, Daniel Feins, and continued as an all-girl school until 1977 when boys were first admitted.

In 1980 Marjorie Kipp was appointed as the new principal. In 1983 the school's pool was closed due to leaks in the sewer system. In 1984 Phyllis Opochinsky founded the "Pre-Teaching Academy" (students work with other peers with classwork and homework, assist teachers in classrooms, write term papers on their experience in pre-teaching,[1] and earn college credit through Lehman College). In 1986, Angel D. Orengo, became the first male to have the school's valedictorian honor.

In 1990, Kipp retired and a new principal, Mrs. Nicola Genco was appointed. During her tenure she addressed security issues, employed more than twenty school safety officers and helped gain funds for the school to be renovated. In 1994 the school's $54 million modernization was officially launched and completed in 1998. Genco also oversaw faculty turnover by terminating some teachers and hiring others she deemed more qualified. Programs such as the Pre-Teaching Academy and Humanities aided Walton's a good reputation. Principal Genco and her administration implemented the Walton Plan to target lateness and loitering around campus, and to encourage the faculty to show interest in every student's progress.

In 1998 the School Construction Authority had declared the completion of Walton's renovation. Principal Genco was concerned that not all of the building's modernization were complete. She and the SCA held a meeting and the agency threatened to close the school down. Genco consulted the news media, such as WABC-TV, WNBC-TV, the New York Daily News, etc. She addressed issues like the peeling paint around the building, lack of heat, poor architecture, and the mismanagement of the pool. In 1999, the SCA agreed with Genco shortly before her retirement to repair the school's roof. In 2002 Principal Vallade persuaded the agency to modernize the exterior of the building which was completed in 2005. However, the swimming pool, with mini-columns and beautifully tiled, was never repaired despite of the SCA contract. Today the pool is used as a dumping ground for broken or outdated computer monitors and hard drives.

On April 19, 1998 Walton celebrated its 75th anniversary by throwing a birthday party inside the lunchroom and holding a luncheon at Maestro's Restaurant for all the graduating classes throughout the school's history. The Periwinkle (yearbook) also acknowledged the anniversary.

In 1999, Valerie Vallade, an alumna of Walton, was appointed as the sixth principal and increased the graduation rate. She retired in 2002, when Patricia Friedman (former Assistant Principal of English) was appointed as Interim Acting Principal. However, truancy and unlawful activity increased. Allegedly, some faculty members berated Friedman for this and called for her resignation. A new principal, John Tornifolio, took over in 2004. In that year, NYC Mayor Michael Bloomberg and the Department of Education labeled Walton as an "Impact School." More than twenty School Safety Officers were assigned and surveillance cameras around campus.

Walton High School faced a phase-out in 2005 because of overcrowding and criminal activity. Numerous advocates, such as the Walton High School Alumni Association, have failed to persuade the New York City Department of Education to keep the school running. The school graduated its final class in June 2008.

For many years Walton was divided into eight theme houses.

When Walton opened in 1923, the school was entirely Caucasian. When Mary A. Conlon died in 1936, the school was 80% Caucasian and 20% African American. In the mid-1960s, Hispanics started to enroll in sizable numbers, and by the end of the 1960s, Walton's ethnic makeup was 40% Caucasian, 40% African American, and 20% Hispanic.[citation needed]. The National Center for Education Statistics (NCES) code 362058002884 identifies this school.

With gratitude to my parents and school; with interest in my city and with concern for my country, I pledge: As a graduate, to build on my education at Walton High School; as a citizen, to work both alone and with many to improve my city and country; and as an American, to respect my country's hopes and ideals and to support, defend and improve its constitution.

Mini-schools inside the Walton Campus