The R129 was based on the shortened floorpan of the Mercedes-Benz W124[2] and featured many innovative details for the time, for instance electronically controlled damping (optional) and a hidden, automatically extending roll-over bar. The R107's rather dated rear diagonal swing axle gave way to a modern multi-link axle. The number of standard features was high, with electric action for the windows, mirrors, seats and convertible top.

Note the odometer is now electronic

Note the slots behind the wheel are different

Note the tail lights are different

1995 had minor updates for the car

1997 cars were the first year to have an option of the panoramic roof. Also newly available:

A second facelift occurred for models 1999+ which featured: 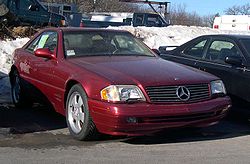 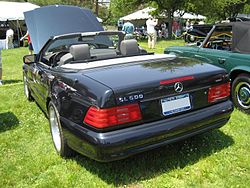 There was a choice of 5-speed manual or 4-speed automatic for the six-cylinder cars; the V8 and V12 could only be ordered with an automatic gearbox.

In Autumn 1993 Mercedes-Benz rearranged names and models. Also, the 300 SL was replaced by:

Only the 280 was available with a manual gearbox. SL 500 and 600 continued with their respective engines.

Antilock Braking System (ABS) ABS senses impending wheel lockup under heavy braking and pumps the front brakes individually or the rear brakes together (to help maintain stability), as needed, up to 30 times per second to prevent lockup and maintain steering ability. 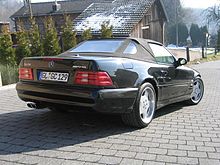 AMG had already offered an SL version while still independent, the AMG 500 SL 6.0 of 1991. After being taken over by Daimler-Benz, there were several AMG SL-models available through D-B dealers.

Only about 300 cars in the SL-class were customized by AMG prior to the 2003 model year.

In 1995 Mercedes released the Mille Miglia edition, to commemorate the 40th anniversary of Stirling Moss's win of the 1955 Mille Miglia road race. The limited edition was available in either SL320 or SL500 guise, came in Brilliant Silver metallic, and had Evo II six-spoke polished alloys, red and black leather interior, carbon-fibre trim and extra equipment. Stirling Moss was given the first SL500 built. 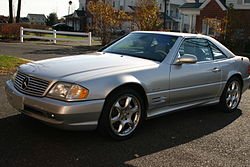 Special edition of 2002 SL 500/SL 600 made to celebrate the race car with the same name (from 1930). Two-tone interior leather on steering wheel and seats, special wheels, etc.

The 2002 Silver Arrow Edition was a prominent feature in the 2001 music video Rollout (My Business) performed by Ludacris.

Several other editions were released of the 129 body SL. These include: 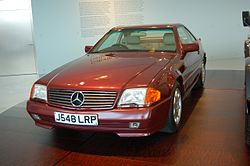 The R129 came into public attention in 1991 when Diana, Princess of Wales sold her Jaguar XJS to lease a J-reg metallic-red 500SL, she became the first member of the royal family to use a foreign car. This was not without controversy as it sparked a media storm as it questioned whether a member of a British royalty should drive foreign cars.[9] Media pressure eventually forced her to return the car to Mercedes-Benz in 1992, with whom it now resides in the Mercedes-Benz Museum[10]