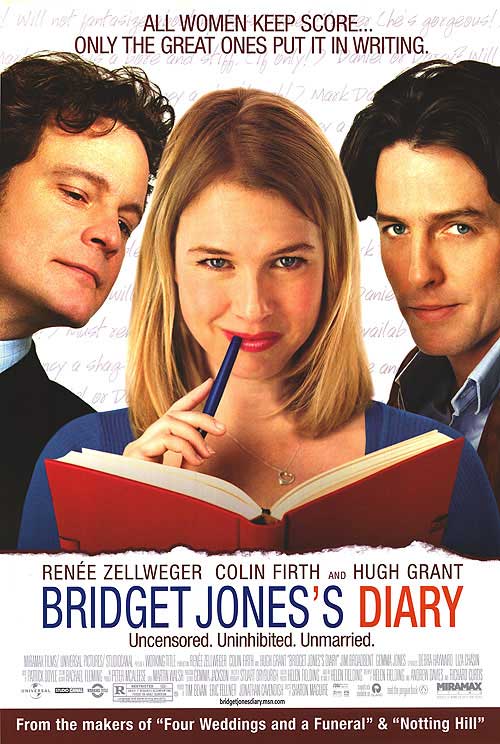 "Bridget Jones's Diary" is a British 2001 , based on the novel of the same name written by . The adaptation starred as Bridget, as the caddish Daniel Cleaver and as Bridget's 'true love' Mark Darcy. A sequel, "", was released in 2004.

Before the film came out a considerable amount of controversy surrounded the casting of the American Zellweger as what some saw as a quintessentially British heroine. However, her performance is widely considered to be of a high standard, including her perfect English accent.

has stated in many interviews that her novel was based upon both 's work "" and the popular 1995 BBC adaptation, "Pride and Prejudice". This was also reflected in the decision to cast Colin Firth as Darcy, since he played the 'real' Mr Darcy in the adaptation of "Pride and Prejudice". This is not the film's only connection to that serial &ndash; the screenplay was co-written by Andrew Davies, who had written the adaptation of Austen's novel for the BBC. [ [http://www.firth.com/articles/03vanfair_italy_oct.html Vanity Fair (Italy), Oct 16, 2003, article on Colin Firth ] ] Another co-writer was Richard Curtis, and there are elements of Four Weddings and a Funeral and even more so of Notting Hill.

The director of the film, , is one of Fielding's friends whom the character of "Shazzer" was reportedly based on. In the film "Shazzer" was played by , who originally auditioned for the role of Bridget, but was not considered a big enough name for the part. also auditioned for the part and was almost considered for it, but eventually was dismissed since she was too young (25 at the time the auditions took place) to play Bridget.

Renee Zellweger was nominated for the for her role in the film.

is frustrated; in her early thirties, still single, and worried about her weight. She works at a book publishing company in London where her main focus is fantasizing about her boss Daniel Cleaver. At a Christmas party hosted by her parents, she meets , the lawyer son of her parents' friends. After their initial meeting, Mark thinks that Bridget is a fool, and Bridget thinks that he is arrogant and rude. On New Year's Day, she finally decides to turn it all around and starts her own diary, which covers all her attempts to stop smoking, lose weight, and catch her Mr. Right.

Bridget and Daniel begin to flirt heavily at work and eventually start dating, despite the fact that he is a notorious womanizer with a questionable personality. Bridget learns from Daniel that he and Mark have a history and as a result, hate each other dearly. Daniel informs Bridget of their fallout, telling her that Mark broke their friendship by sleeping with his fiancee.

Daniel's dubious character becomes clearer and clearer to Bridget, and eventually she breaks off their relationship when she catches him with another woman, a colleague of his from work in . She finds a new job in television. In the meantime, she and Mark have a series of run-ins- at a book launch, at a bed-and-breakfast, and at a mutual friend's dinner party. During the party, Mark (who has come to the dinner with his colleague, Natasha) privately confesses to Bridget that, despite Bridget's faults, he likes her just the way that she is. He later helps her to land a major interview for work. Bridget begins to develop feelings for Mark. Just as Bridget and Mark's mutual attraction for each other comes together at a birthday dinner party hosted by Bridget, Daniel comes back into the picture claiming Bridget's attention. Mark originally leaves the party, but comes back to face Daniel. Mark punches Daniel and the two fight, resulting in Daniel passing out. Bridget, still thinking that Daniel had been the wronged one, chastises Mark. Afterward, she tells Daniel that she doesn't want to be with him.

Bridget eventually learns the truth about Mark and Daniel's fallout, in which Daniel had seduced Mark's ex-wife when they were still married. At a dinner party the same day, Bridget confesses her feelings for Mark, only to find out that he and Natasha are both leaving to accept jobs in New York. Just as Bridget starts to embark on a trip to Paris with her friends to mend her broken heart, Mark returns to stay with Bridget.

As they're about to kiss for the first time, Bridget exits to her bedroom to change her undergarments. While Bridget is changing, Mark spies her diary, in which she has written many insults about him. Bridget returns to find that he has left. Realizing that he had read her diary and that she might potentially lose him again, Bridget runs outside after him in a thin coat and her undergarments. Unable to find him and disheartened, she is about to return home when Mark appears holding a new diary. It becomes apparent that the new diary was to be a gift from Mark to give their relationship a fresh start. They kiss in the snow-covered streets and the movie concludes.

The movie's soundtrack was composed by .

It also features two hit songs which were released as singles, "Out of Reach" by and "It's Raining Men" by . contributed two songs to the soundtrack and contributed one.

This is the CD:

*In , the title is: "Bridget Jones – Schokolade zum Frühstück", meaning "Bridget Jones - Chocolate for Breakfast"
*In the the film grossed a very impressive £41,692,598.
*In the the film made $71,500,556.
*The film has made $281,929,795 worldwide.
*Controversial author makes a cameo appearance as himself, with both Bridget and Daniel asking him for directions to the lavatory.
* had to turn down the part of Bridget Jones, because of her commitments to perform on Broadway.

* (filming location)
* (A Korean series with some thematic and narrative similarities)
*""