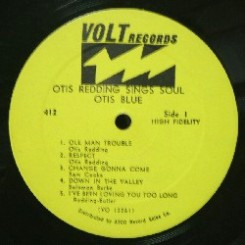 
"Respect" is a song written and originally released by Stax recording artist in 1965. "Respect" became a 1967 hit and for singer . While Redding wrote the song as a man's plea for respect and recognition from a woman, the roles were reversed for Franklin's version. Franklin's cover was a landmark for the feminist movement, and is often considered as one of the best songs of the era, earning her two Grammy Award in 1968 for "Best Rhythm & Blues Recording" and "Best Rhythm & Blues Solo Vocal Performance, Female", and was inducted in the Grammy Hall of Fame in 1998. In 2002, the honored Franklins version by adding it to the National Recording Registry. It is number five on 's list of The 500 Greatest Songs of All Time. [cite web|url=http://www.rollingstone.com/news/story/11028260/the_rs_500_greatest_songs_of_all_time/1
title=The RS 500 Greatest Songs of All Time|publisher=RollingStone.com|accessdate=2007-06-02] It was also included in the list of "", by the Recording Industry of America and the National Endowment for the Arts.

Otis Redding wrote and recorded "Respect" as a blues tune in the studio while finishing his third album, "". The album became widely successful, even outside of his largely and fanbase. When released in the summer of 1965, the song reached the top five on Billboard's Black Singles Chart. The song even crossed over to pop radio's white audience, peaking at number thirty-five there. At the time, the song became Redding's second largest crossover hit (after "I've Been Loving You Too Long") and paved the way to future presence at American radio.

Making of a hit

Producer had come across Redding's song and brought it to Franklin's attention. While Redding's version was popular among his core R&B audience, Wexler thought the song had potential to be a crossover hit and to demonstrate Franklin's vocal ability. Together with Aretha's sisters, Carolyn and Erma, singing backup "Respect" was recorded on of 1967.

During the recording process, a bridge was added to Redding's original composition. Another addition was ' and the slicker production of Wexler and co-producer . The resulting song was featured on Franklin's debut album, "I Never Loved a Man the Way I Love You". As the title track became a hit on both R&B and pop radio, Atlantic Records arranged for the release of this new version of "Respect" as a single.

Franklin's rendition found even greater success than the original, spending two weeks atop the Billboard Pop Singles chart, and for eight weeks on the Billboard Black Singles chart. It also became a hit internationally, reaching number ten in the , and helping to transform Franklin from a domestic star into an international one. Even Otis Redding himself was impressed with the performance of the song, and at the in the summer of the cover's release, he was quoted playfully describing "Respect" as the song "that little girl done stole from me."

Franklin's version of the song contains the famous lines (as printed in the lyrics included in the 1985 compilation album "Atlantic Soul Classics"):

The last line is often misquoted as "Take out, TCP", or something similar, and indeed most published music sheets which include the lyrics have this incorrect line in them. "R-E-S-P-E-C-T" and "T-C-B" are not present in Redding's original song. [Redding, Otis. "Respect", 1965, Volt Records] , but were included in some of his later performances with the .

"" is an abbreviation that was commonly used in the 1960s and 1970s, meaning "Taking Care (of) Business", and it was particularly widely used in . [cite book| first=Matt| last= Dobkin| year= 2004| title= I Never Loved a Man the Way I Loved You: Aretha Franklin, Respect, and the Making of a Soul Music Masterpiece| edition= | publisher= St. Martin's Press| location=New York| pages= pp 169-170| id=ISBN 0-312-31828-6 ] However, it was somewhat less well-known outside of that culture [Landy, Eugene E. "The Underground Dictionary", New York: Simon and Schuster (1971), ISBN 0671210122] , yielding a possible explanation as to why it was not recognized by those who transcribed Franklin's words for music sheets.

"Respect" is one of several songs considered to have defined the 1960s. It has appeared in dozens of films and still receives consistent play on oldies radio stations. In the 1970s, Franklin's version of the song came to exemplify the feminist movement.Fact|date=July 2008 Although she had numerous hits after "Respect", and several before its release, the song became Franklin's and her best-known recording. "I Never Loved a Man the Way I Love You" was ranked eighty-third in Rolling Stone's 500 Greatest Albums of All-Time in 2002. Two years later, "Respect" was fifth in the magazine's 500 Greatest Songs of All-Time. RRHF500|Respect

Despite being overshadowed, Redding's version is still considered a soul classic, and highly regarded by fans of Stax-Volt and recordings. , a group recorded a version of Respect in 1967, which became a minor hit in the . Another regional band that had a hit with the song was the Michigan-based rock band , whose 1966 release of the song received airplay on Detroit radio stations and predated the release of Aretha Franklin's version by a year. The also have a version of the song, recorded in 1969 for .

frequently included the song in their live set, and have issued at least two different live recordings of the song. A cover was released by in 1989, and reached #17 in the . The song was covered by the Basque fusion-rock band , translated as "Errespetua" ("respect" in ) for their 1996 cover album "". After the band's split, singer continued to perform his version of the song in some of his solo projects' concerts, and it appeared as the final track on his live album "Kontrabanda - Barcelona, Apolo 2004-I-21".

The phrase "what you want, baby I got it" was interpolated on 's song "Headturner", from her 2007 album "". The song was featured on the game .