Mitri Raheb (Arabic: متري الراهب‎) is a Palestinian Christian, the pastor of the Evangelical Lutheran Christmas Church in Bethlehem (a member church of the Evangelical Lutheran Church in Jordan and the Holy Land, or ELCJHL), and the founder and president of the Diyar Consortium, a group of Lutheran-based, ecumenically-oriented institutions serving the Bethlehem area. 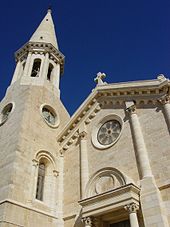 Mitri Raheb was born in Bethlehem, in 1962. He pursued his higher education in Germany, first at Hermannsburg Mission Seminary (1980–1984) and then at Philipps University in Marburg, Germany (1984–1988), where he completed his graduate studies including a doctorate in theology. He returned to Bethlehem in 1988 to serve as the pastor of the Evangelical Lutheran Christmas Church (Christmas Lutheran Church), also teaching at the Bethlehem Bible College (1988–1993) and serving as the managing editor of the Al-Liqa’ Journal for religious and heritage studies in the Holy Land (1992–1996).[1]

Since 1992, Raheb has founded and led a number of projects and institutions serving the social needs of Palestinians living in the Bethlehem area, focusing specifically on women, children, youth, and the elderly.[2]

Raheb's work has been recognized by the Luther Institute in Washington, DC (Wittenberg Award, 2003), Concordia University in River Forest, IL, USA (Honorary Doctor of Letters, 2003), Spirituality and Health Magazine (50 Best Spiritual Books of 2004 for Bethlehem Besieged: Stories of Home in Times of Trouble), and the Central Islamic Archive Institute (Mohammed Nafi Tschleibi International Peace Award, 2006).[3] In 2008, he was awarded the Aachen Peace Award.[4]

He currently lives in Bethlehem with his wife and two daughters.

Beginning with the Abu Gubran Guest House and the Authentic Tourism Program in 1992, Raheb has founded a number of institutions serving the Bethlehem area.[5]

The Diyar Consortium is an umbrella organization that is responsible for the administration of its component institutions: the ICB, the Dar Al-Kalima Health & Wellness Center, and the Dar Al-Kalima College. “Diyar” (Arabic: ديار‎) is the plural of “dar” (Arabic: دار‎), meaning “house” or “homeland” in Arabic. It is headed by its president, Raheb, who is responsible for the overall vision of the consortium and securing funds for continuous growth. The consortium is governed by a Board of Directors, whose members come from diverse religious and vocational backgrounds, and administered by an executive committee and three program committees (for health, culture, and education).[6]

The International Center of Bethlehem, or Dar Annadwa Addawliyya (Arabic: دار الندوة الدولية‎), meaning “The House of Worldwide Encounter”) is located in Madbasseh Square, in central Bethlehem, about half a mile (.8 km) from Manger Square.

A number of initiatives operate under the aegis of the ICB.[7] These include:

The ICB complex comprises the old Lutheran School building, the former church offices, and three other buildings. The Ad-Dar Cultural and Conference Center and other modern parts of the building were designed by Finnish architect Juha Leiviskä.[8] The ICB complex sustained significant damage when it was occupied for 3 days by the Israeli army during the siege of Bethlehem in April 2002. Reconstruction and restoration costs totaled more than US$500,000.[9]

The Dar Al-Kalima Model School (Arabic: مدرسة دار الكلمة النموذجية‎), meaning “The House of the Word”) is located on the hilltop Mt. Murair campus and serves students in grades K-12. The school is coeducational and Lutheran-based, serving both Christian and Muslim students from the towns, villages, and refugee camps of the Bethlehem area.[10] The Extra-Curricular Program after school offers students the opportunity to receive instruction in their specific, chosen areas of interest from professionals in those fields.[11] The Bright Stars program (run through the ICB) is similar to the ECP program, but it meets once a week and is open to children who attend schools other than Dar Al-Kalima.[12] 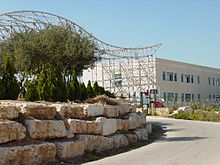 The Health & Wellness Center is also located on the hilltop Mt. Murair campus, on the ground level of the building that houses the Dar Al-Kalima Model School. It houses health clinics (audiology, nutrition, endocrinology, cardiology, and psychotherapy) as well as fitness facilities and programming, including a swimming pool and sauna, yoga and aerobics classes, and exercise machines.[13] The aims of the Health & Wellness Center are prevention through promotion of healthy lifestyles, and providing specialist care not available elsewhere in the southern West Bank.[14]

The College began operating in 2006 from the ICB complex in Madbasseh Square, offering diploma courses in documentary film-making and glass and ceramic art. The College received accreditation in 2007 from the Palestinian Ministry of Education and Higher Education for Bachelor’s degree programs in contemporary fine art, multimedia and tourism studies.[15]

Raheb has written 8 books and numerous articles on issues relating to interfaith dialogue, social transformation, contextual theology, and culture, many of them available in over 10 languages, including Korean, Japanese, Chinese, Swedish, Finnish, Danish, Norwegian, English, German, and Arabic.[16]

Raheb’s work has attracted attention from major media networks, including the BBC,[17][18] ABC,[19] and HBO,[20] [21] and has been featured in publications such as the Washington Post,[22] the Economist, Newsweek, the New York Times and the Boston Globe.[23] He has also been interviewed by the Australian Broadcasting Corporation,[24][25] CNN and CBS.[26]