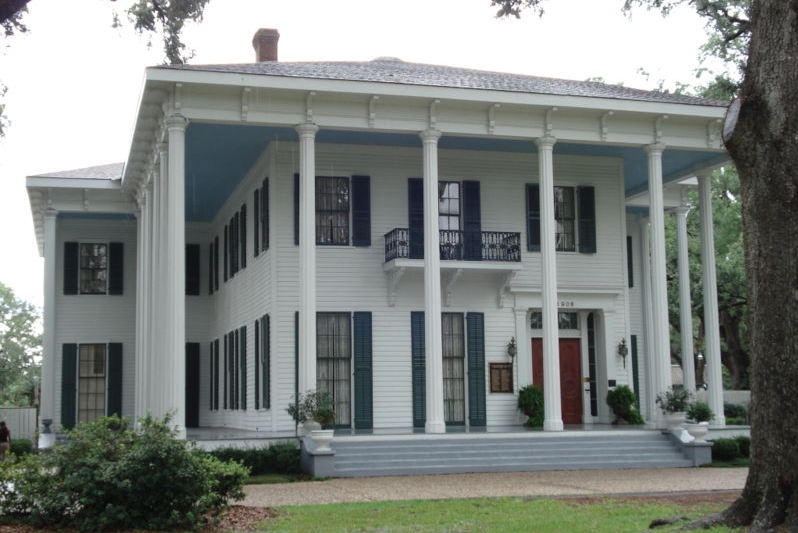 John Bragg was born near . He graduated from the in 1824, where he studied law. He was admitted to the bar in 1830 and moved to Mobile in 1836, where he continued the practice of law. He was appointed judge to Alabama's 10th Judicial Circuit in 1842, later leaving that post after being elected to the . He bought the property at 1906 Springhill Avenue on 10 May 1855 for the sum of $7500 and began construction of the house that continues to stand there today.

Two notable events in the history of the mansion occurred during the . The first was the cutting of all of the trees on the property to give the Confederate defenders of Mobile free range to shell any approaching troops. The second event was the removal of all of the furnishings from the mansion during the war to Bragg's plantation upriver. That plantation and all of the furnishings were subsequently burned when Wilson's Raiders went through that area, the irony being that Mobile itself never became a battleground as had been anticipated. John Bragg died in Mobile on 10 August 1878 and was interred in Magnolia Cemetery.

The house remained in the Bragg family until 1880 when it was bought by William H. Pratt. John's brother, Confederate General , is often credited with owning the property after John Bragg's death, but this is not the case. He was a frequent guest at the house during John Bragg's lifetime and he did live on the property for a short time after the Civil War, while supervising the construction of jetties at the mouth of , however. The property passed through the Upham, Davis, and Wingate families before it was purchased by A.S. Mitchell in 1924.

The house is two-stories and built on a T-shaped plan. The architecture is in the Greek Revival style with tall, spindly columns that are derivative of the around a three-sided veranda. The bracketed indicates some Italianate influence, a fusion of stylistic elements that some have dubbed a "bracketed Greek Revival". It contains fourteen rooms, with seven of those being bedrooms. The ground floor features convert|16|ft|m|1|adj=on ceilings.