For other parties of the same name, see Christian Social Party

The Christian Social Party (CS) (German: Christlichsoziale Partei) was an Austrian conservative political party from 1893 to 1933 and is a predecessor of the contemporary Austrian People's Party. 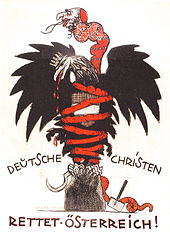 It was founded in 1893 by the populist mayor of Vienna and anti-Semite leader Karl Lueger, and developed from the Christian Social Movement and the Christian Social Club of Workers. It was oriented towards the bourgeoisie and clerical-catholic; there were many priests in the party, including Chancellor Ignaz Seipel. This attracted many votes from the conservative rural population. Its support of Austro-Hungarian monarchy also gave it considerable popularity among nobles.

From 1907 to 1911 it was the strongest party in the Lower House of the Reichsrat, but it then lost this position to the Social Democratic Workers' Party (Sozialdemokratische Arbeiterpartei Österreichs or SDAPÖ). During World War I, it supported the government, but after the end of the monarchy in 1918 it voted for the creation of a republic and Austria's accession to Germany.

During the First Republic

In the process of establishing the so-called Austro-fascist dictatorship, Christian Social Chancellor Engelbert Dollfuß merged the Christian Social Party into the Patriotic Front in 1933. After the Anschluss of Austria to Nazi Germany, the party was banned in March 1938 and ceased to exist. After the Second World War, the party was not founded anew. Most of its supporters and politicians thought the name was too closely associated with Austrofascism; they founded the Austrian People's Party (ÖVP), which can be regarded as the inheriting party of the CS.

Prominent members of the CS included: 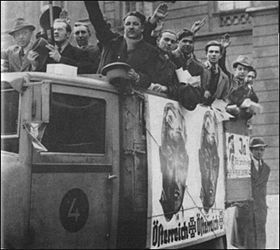 Supporters of the Austrian Christian Social Party in 1934