The Christian Social Movement in Ukraine was a political movement that existed in Western Ukraine from the end of the 19th century until the 1930s.

Its programme was based on Christian ethics and on papal encyclicals focused on social concerns whilst its political orientation was clerical-conservative. The movement's leaders included the Ukrainian political and cultural figure Oleksander Barvinsky, Anatole Vakhnianyn, and Kyryl Studynsky. The Christian Social Movement's support was based on Ukrainian moderates seeking rapproachment between Ukrainians and Poles. [1] Originally its principles included loyalty to Austria–Hungary and the Habsburg monarchy, the creation of a separate Ukrainian province, support for the Ukrainian language and expansion of Ukrainian schools, and opposition to Galician Russophiles. 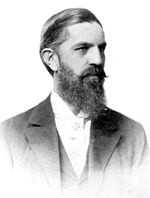 Its political party, founded in 1896, was originally named the Catholic Ruthenian People's Union. During this time, it was supported by Metropolitan Sembratovich, head of the Ukrainian Greek Catholic Church, and by the Austrian government, which subsidized the newspaper Ruslan. [2] In 1911 the Catholic Ruthenian People's Union, under the leadership of Oleksander Barvinky, renamed itself as the Christian Social Party and sent representatives to the Austrian Parliament in Vienna as well as to the local Galician Diet. [1] After Austria-Hungary's collapse, the Christian Social Party subsequently participated in the formation of the West Ukrainian National Republic. Following the Polish–Ukrainian War, after western Ukraine had passed under the control of the Second Polish Republic, the party continued to function until the 1930s. At that time, part of its members joined the Ukrainian National Democratic Alliance (UNDO) (a moderate political organization opposed to the radical Organization of Ukrainian Nationalists), while others founded the Ukrainian Catholic People's Party.

In the Second World War, western Ukraine was annexed by the Soviet Union and the Christian Social Movement ceased to exist there.

Due to its ties to the Ukrainian Greek Catholic Church, the Christian Social Movement was criticized for its Clericalism by both left-wing socialist groups as well as by right-wing nationalist groups in western Ukraine. [1]