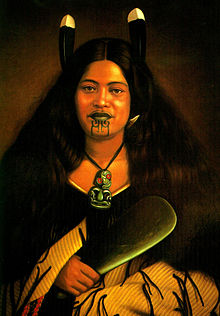 Pare Watene in 1878 holding a mere (by Gottfried Lindauer)

The mere (pronounced [ˈmɛrɛ]) is a type of short, broad-bladed club (patu), usually made from Nephrite jade (Pounamu or greenstone).[1] A mere is one of the traditional, close combat, one-handed weapons of the indigenous Māori, of New Zealand. A mere could be used to split a skull open.[2] 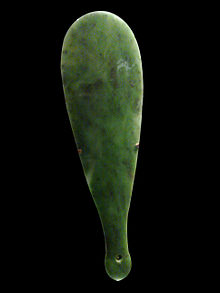 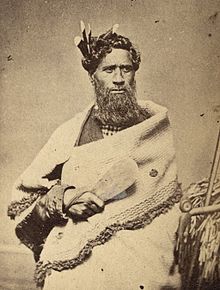 The Mere is a spatulate, leaf shaped, form of short club. It has a broad, rounded apex that narrows to form a handle, terminating in a butt or heel (reke), marked by several grooves. Mere have two convex, almost flat sides and a rounded top. The top of the mere was ground to a sharp edge, extending down both sides of the weapon.

Generally, short clubs had holes carved or drilled through the butt end of the handle, allowing a wrist cord (tau or patui) made of plaited New Zealand flax, or polynesian dog skin, to be passed through and attached to the wielder's wrist. Passing the wrist cord over the thumb and around the hand prevented the club from slipping during use.

Mere are variable in length, typically between 25 and 50 centimetres (10 and 20 in), with an average length of 35 centimetres (14 in). The width of a mere is similarly variable, from under 7 to over 12 centimetres (3 to 5 in). The dimensions of a mere were generally determined by the characteristics of the raw materials the club was made from.[3] Extremely long or short mere are unwieldy in combat, and are likely to have been mainly used for ceremonial purposes.[2].

The term "Mere" was used by some tribes (Iwi) to refer exclusively to clubs made from Nephrite jade (Pounamu, or greenstone).[1] In other regions, "Mere" was more broadly used to refer to clubs of a similar shape and design, more properly patu, made from: hardwood (meremere, mere rakau), whalebone (patu paraoa), or stone (patu onewa). In these cases, a distinction is made for mere from greenstone, known as "Mere Pounamu" or "Patu Pounamu".

The pounamu used to make a mere was carefully chosen to be flawless and to have a good colour. A block of greenstone was first rough cut using pieces of quartzite combined with sand and water. Dressing of the surface was done with fine sandstone and pieces of very hard smooth stone. Due to the hardness of greenstone, mere pounamu were able to made thinner than other similar patu made from stone, however this made the process of manufacture slow and arduous. The creation and finishing of a mere pounamu sometimes took more than one generation to complete.[4] 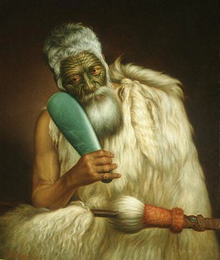 Mere, and other patu, were used for close-quarter fighting. Held in one hand these close-range striking weapons, were used primarily for end-on thrusting or jabbing (tipi). In combat, jabbing thrusts or strikes would be directed at the ribs, neck or temple. It has been claimed, that a strike to the skull combined with a twisting flick of the wrist could force or wrench the victims skull open.[2][4] The designed use of the mere for forward striking thrusts is an unusual characteristic of Maori patu, where in other parts of the world, clubs are generally wielded with an ax-like downward blow.[5]

The butt (reke) of a mere was used to strike (buttstroke) a victim's head.

While jabbing thrusts were the more common or traditional form of attack, blows were sometimes struck using the edge of the weapon in a downward chopping strike (patu). Mere pounamu made of Nephrite jade measure between 6.0 and 6.5 on the Mohs scale of mineral hardness. Nephrite is the slightly softer when compared to Jadeite which is the other type of Jade [6] Mere pounamu, the scarcest and most revered of Maori short-clubs, were hard enough to sustain downward chopping blows. However, other more common forms of patu made of wood, stone or bone, were softer and therefore more easily damaged using downward chopping blows.

It was stated that a proficient warrior armed with a patu was able to defeat a man armed with a longer weapon, like a taiaha or spear. A fighter using a patu often used a type of pad (whakapuru), held or on the off-side arm, used to parry or lessen the impact of an opposing weapon.[4]

When not in use mere were carried in a flax belt (tatua) or sometimes suspended from wrist cord to be able to be hidden beneath a cloak.

Pounamu was highly prized by Maori and the greenstone patu – mere pounamu – was the most revered of all Maori weapons and seen as a symbol of chieftainship (Rangatira). Highly prized, these mere were passed through generations and the weapons were named and said to possess a spiritual quality or mana of their own. Particularly special mere were imbued with magical powers, or supernatural qualities, in a similar fashion to mythological magic swords. Mere were buried with their chiefly owners, but were considered so valuable that they were later recovered from the grave.[7]

It was considered an honour to be killed by a specially significant mere pounamu. Captives would sometimes volunteer their own mere ponaumu as their means of execution rather than be killed by a lesser weapon.[4][7]

Due to the high value placed on revered mere pounamu they would often be hidden when not in use,[4] and kept in specially constructed cases.[7]. Considerable efforts were undertaken, often by an entire tribe, to recover or regain significant mere that were lost or stolen.