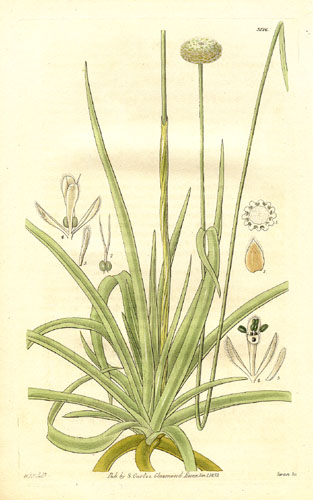 "Eriocaulon decangulare", commonly known as ten-angled pipewort, hat pin and bog button, is a ous plant native to the eastern , and . The plant's distribution is quite irregular, with several disjunct populations and a discontinuous primary range. Most of its habitat in the United States runs along the , but some populations also occur in more mountainous regions. It is found in areas of relatively low elevation and the plant does not occur higher than 300 metres above sea level. This pipewort is found in peat and sand that is moist to wet and associated with s, s, low pinelands, ditches and the banks of s.

"Eriocaulon decangulare" is found in the United States, Mexico and Nicaragua.

A study in of three inland, mountainous populations found the ten-angled pipewort has a high affinity for acidic soil, ranging from a pH 4.1 to 5.2 in their samples. At all sites, 58 to 71% of all the plants it occurred with were either obligate or facultative wetland plants. es were another conspicuous element of the habitat, with 30 to 60% of the studied sites being covered with them. The results of the study suggest that "Eriocaulon decangulare" benefits from disturbance due to its affinity for high sunlight. The smallest population examined was in only 50% full sunlight, while the other two were in full sunlight more than 90% of the day and supported much larger populations. As such, the control of woody plant growth, either naturally or artificially, is important to maintain healthy populations of the plant. The ten-angled pipewort was found to occur with several rare or threatened wetland plants, such as "" (spreading pogonia), "" (round-leaved sundew), "" (hairy-fruit sedge) and "" (Canada burnet), though these associations differed from site to site.