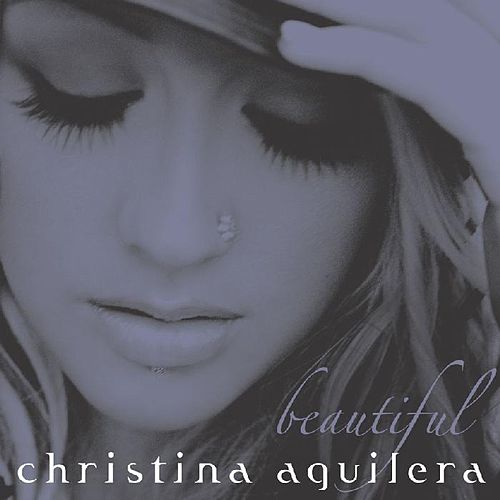 "Beautiful" is a pop song written and produced by and recorded by American singer-songwriter for her second studio album, "Stripped" (2002). It is a -driven, classically-flavored ballad in which its protagonist deals with hurtful statements made against her that cause her to feel insecure and have low self-esteem. She does not let other people's negativity get the best of her. It was released as the album's second single in late 2002 (see ) and reached number one in several countries. The song earned her a for Best Female Pop Vocal Performance.

Perry had written "Beautiful" long before she let anyone hear it. She considered the song very dear and personal to her and was insecure about sharing it with anyone else. At first she had let Pink hear "Beautiful" before anyone else during their "" sessions. Pink was so impressed with the song that she had asked Perry if she could record it for her album, but Perry declined, feeling that she wanted to save it for her own singing career. A few months later, while Aguilera and Perry were recording for the "Stripped" session, Perry also let Aguilera listen to the song. Aguilera so much liked the song that while Perry was playing the piano for it, Aguilera took over the vocals for the song. After that, Aguilera told Perry that she needed this song on her album. Perry was both impressed by Aguilera and confused, because even though she was blown away by her rendition of the song, she still did not want to give it up. After Aguilera continued lobbying for the song, Perry was finally convinced that Aguilera matched the song perfectly and handed it over to her. [ [http://www.ascap.com/playback/2003/fall/perry.html "Linda Perry, High Priestess of Pop"] . . 2003. Retrieved , .]

The song was recorded in a single take. Aguilera reportedly expressed concerns that she had hit some notes too flat and some too sharp, but Perry insisted that she leave them in.

Some instruments used in this song include the cello, piano, violin and drums.

Aguilera has re-recorded the song for inclusion on her with the name "You Are What You Are (Beautiful)", the album will be out in .

"Beautiful" is a gentle ballad composed in the key of E♭ major.

"Beautiful" received positive reviews from music critics. "" found it to be a highlight of "Stripped", finding it "more restrained" than the rest of the album. [Browne, David. [http://www.ew.com/ew/article/0,,384149~4~0~stripped,00.html "Stripped (Music - Christina Aguilera)"] . "". , . Retrieved , .] "" described the song as "a typical ballad that actually tastefully reins in Aguilera's frequent vocal acrobatics".

According to Perry, she and Aguilera's management had recommended "Beautiful" as the from "Stripped" but that Aguilera insisted on releasing "" instead.

"Beautiful" won a 2004 for "Best Female Pop Vocal Performance", and Linda Perry received a 2004 nomination for . The song was ranked number two in the "Readers' Top Ten Singles" list at the 2004 Music Awards, and its video was also placed at number two in the "Best Video, Readers' Pick" category. The video was the recipient of the "Popular Female Video" award at the 2003 Channel [V] Thailand Music Video Awards. A of "Beautiful" by won a 2003 HX Award for "Dance Song of the Year". The single sold over 7,026,000 millions copies worldwide.

The song's was directed by . The video opens with Aguilera speaking the line "Don't look at me", followed by scenes of her singing alone in a room intercut with -related sequences of other people, several of which deal with . An girl examines herself in a , eventually punching through it; a thin boy stands lifting weights in a room plastered with images of bodybuilders; and a girl rips out pages of and throws them into a fire. In one sequence, a girl is bullied by several peers, and in another, a goth sits at the back of a bus while several people get up and move. The video also touches on issues. One scene features a gay couple, portrayed by and , kissing on a bench and ignoring the stares of people who pass them.

The music video was successful on video chart programs. It debuted on 's "" on , at number two. [ [http://www.atrl.net/trlarchive/?s=debuts "The TRL Archive - Debuts"] . ATRL. Retrieved , .] It was unable to reach the top of the countdown but remained on it for fifty days and retired at number six on , . [ [http://www.atrl.net/trlarchive/?s=halloffame "The TRL Archive - Hall of Fame"] . ATRL. Retrieved , .] The video topped 's "Countdown" for two consecutive weeks and remained on the countdown for fifteen weeks.

* In the first Spanish version of , sang it.
* It was also covered by in the British television program, "", where she performed a version of the song.

* In addition, guitarists and of covered "Beautiful" instrumentally for the early shows of Guns N' Roses' 2006 tour.

* Alex Parks winner of 's "" also recorded a version for her 2003 debut album and appeared as a b-side to her first single "".

* "" runner up performed a cover during the Top 10 show #1 Hits, which received much praise from the judges and audience. She then went on to release a cover of "Beautiful" for her "Australian Idol: The Journey" album which was released as a single but never was charted.

* Bob Ricci recorded a parody of the song called "Unhackable" for his 2008 album Bob's Gone Wild.

* In "Believe the Unseen", an episode of "ER" that first aired on , the song is performed a capella by a young girl with .

* The band Hunchback recorded a cover version for their album "" which features Michael Gerald from Killdozer.

* performed a cover of the song for s .