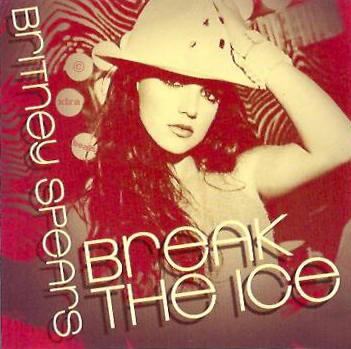 Spears collaborated with Hills, Araica, Hilson and Washington for "Break the Ice", who were behind her comeback single, "". The production team worked on the track when Spears was pregnant with her second child.

"Break The Ice" is an -oriented electro track with heavily synthesized, breathy vocals.

Prior to its official release, "Break The Ice" appeared on several U.S. "Billboard" component charts on the week the host album debuted on the "Billboard" 200. It charted on the at number seventy-five, and on the at number seventy-two. It also debuted on the "Billboard" chart at number nine; this would be equivalent to number 109. The following week, "Break The Ice" fell out of all charts. When announced as the third single release from "Blackout", the song re-charted on the Bubbling Under Hot 100 on , 2008, at number twenty-two, rose to number eight the following week, and peaked at number two on , 2008. "Break the Ice" entered the official "Billboard" Hot 100 on , 2008, at number one hundred. On , 2008, it rose up to number forty-six, remaining at this position for another two weeks before moving up one position, and then rising to forty-three on the week of . The song also reach the top position on the U.S. "" on . This is Spears' third consecutive single to reach the top position on this chart.

On , 2008, the track debuted at number forty-one on the Australian ARIA Singles Chart, based on downloads alone. In its second week, it climbed to number thirty-eight, with the support of physical sales. In its third week, it jumped to number twenty-three, due to a large rise in physical sales. On , 2008, the track dropped down to number twenty-six, and in its sixth week, dropped to number twenty-five. Compared to Spears previous two singles from "Blackout," which both peaked inside the top three on the Australian ARIA Singles Chart, the track has failed to reach equal success. On , 2008, however, after the single's physical release, the track debuted at number one on the Australian ARIA Dance Chart, making it the third consecutive Spears single to reach the chart's top position. The track remained in the number one spot for four consecutive weeks, until dropping down to number four on , 2008, with still charting at number six. [ [http://www.ariacharts.com.au/pages/charts_display_dance.asp?chart=1D20 ARIA Dance Chart] ]

Prior to its rising download sales, "Break The Ice" charted on the at number thirty-six on , 2008. From number twenty-three on April 14, 2008, the single rose to number fifteen on , 2008, due to its physical release. Its disappointing peak position is attributed to the decision of Jive Records not to offer the physical single in Britain's most important CD seller, Woolworths. Spears' label calculated that people instead fall back on the album, "Blackout." Consequently, "Break The Ice" failed to enter the top ten, and became Spears' lowest charting single in the U.K.; it quickly moved down and fell out of the chart after ten weeks. On June 15, 2008, the song re-charted at number seventy-one, spending an eleventh week on the chart.

In New Zealand, the single debuted at number thirty-seven on , 2008. That is three places lower than the entry position of its predecessor, "", which debuted at number thirty-four in late December 2007. "Break The Ice" fell out of the chart the following week, but re-charted on , 2008, at number thirty-four. The single then fell out of the chart once again, and re-entered the following week at number forty, before moving up to thirty-three, and then to twenty-four where it peaked. "Break The Ice" spent a total of nine non-consecutive weeks on the chart.

Robert Hales directed Spears' first music video. The music video premiered on the website BlackoutBall.com, [ cite web | url=http://www.rollingstone.com/rockdaily/index.php/2008/03/12/britney-spears-break-the-ice-video-to-premiere-today-fandemonium-ensues/ | title=Britney Spears’ “Break The Ice” Video To Premiere Today, Fandemonium Ensues | publisher= | author=Daniel Kreps | date=2008-03-12 | accessdate=2008-03-13 ] a site designed to "serve as a virtual black tie premiere party" for the video. [ cite web | url=http://www.eonline.com/news/article/index.jsp?uuid=bfe0f7aa-0f70-417f-942a-9a98b314d796&entry=index/ | title=Britney Drawn to Perfection | publisher= | author=Natalie Finn | date=2008-03-12 | accessdate=2008-03-13 ] The video debuted on 's "" on March 17, as well as various British music channels. The video depicts an Spears breaking into a research facility, battling with suited henchmen, and successfully detonating clones of herself within the building. It ends with the phrase, "to be continued...."

This video has visuals lifted straight from popular anime such as , and numerous others.

The video has reached number one several times on the Latin American MTV Show, Los 10 Mas Pedidos South, as well as on the MTV Asia Top 20 Chart. The song and music video peaked at number three on the European Top 20. It proved to be a popular video throughout its release on MTV's Interactive Chart and Hits Top 30 shows.

Synonyms:
Make a beginning, prepare the way, open a way