I Want You Back

I Want You Back

Infobox Single
Name = I Want You Back 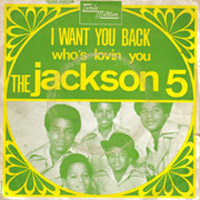 Originally considered for and later for , as "I Wanna Be Free," "I Want You Back" explores the theme of a lover who decides that he was too hasty in dropping his partner. An unusual aspect about "I Want You Back" was that its main lead vocal was performed by a , .Fact|date=May 2008

The single was a notable first in many respects: it was the first Jackson 5 single to be released on MotownFact|date=March 2008, the first of four Jackson 5 number-ones released in a row (the others are "ABC", "", and ""), and the first song written and produced by The Corporation, a team comprising Motown chief , , , and .

"I Want You Back" was also the first Jackson 5 song recorded in ; the quintet had previously been recording Bobby Taylor-produced covers, including "", the b-side to "I Want You Back", at in .

The Jackson 5 performed "I Want You Back," along with Sly & the Family Stone's "Sing a Simple Song," The Delfonics' "Can You Remember," and 's "There Was a Time" during their first television appearance on "" in an episode hosted by .

*Lead vocals by , , and
*Background vocals by Michael Jackson, Jermaine Jackson, , Jackie Jackson and
*Written, produced and arranged by The Corporation
*Keyboards by
*Guitar by David T. Walker, Louis Shelton and Don Peake
*Bass guitar by
*Drums by Gene Pello

A "live" version by Graham Parker and The Rumour garnered mild success in 1979; its title is sometimes shown as "I Want You Back (Alive)." recorded a version with The Funk Brothers at Hitsville in Detroit with the familiar Motown sound. It was to be included on his unreleased LP "David".

Canadian girl group West End Girls had a top-10 single in 1991 with their cover, while British girl group Cleopatra also released a cover version, which reached #4 in the UK in 1998.

Singer-songwriter often performs a cover version of the song live at her concerts. A version of "I Want You Back", featuring mandolin and guitar, was performed by acoustic trio on their "Farewell (For Now) Tour" in 2007.

The single was re-issued in the UK in 1988 as a remix by 's PWL label. They remixed the song to include a snippet of "ABC". The remix reached #8 in the UK.Fact|date=March 2008

North Carolina band Angry Salad released a cover of "I Want You Back"; the song quickly became a fan favorite.

* [http://www.jackson5abc.com/albums/diana-ross-presents-the-jackson-5/i-want-you-back Overview of "I Want You Back"] Complete picture sleeved records from all over the world, from jackson5abc.com