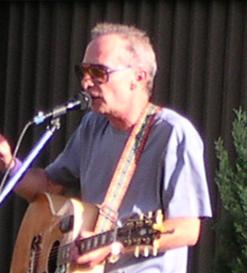 Graham Parker (born in , England) is a British rock and .

In the late 1960s and early 1970s, Graham Parker sang in small-time English bands such as the Black Rockers and Deep Cut Three while working in dead-end jobs like a glove factory and a petrol station. In 1975, he recorded a few demo tracks in London with Dave Robinson, who would shortly found and who connected Parker with his first backing band of note. Graham Parker had one track, "Back to Schooldays", released on the compilation album, "" for Stiff Records.

Graham Parker and (Parker, with Brinsley Schwarz and on guitars, Bob Andrews on keyboards, on bass and on drums) formed in the summer of 1975 and began doing the rounds of the British pub rock scene. The band was also augmented at times by a four-man horn section known as The Rumour Brass: John "Irish" Earle (saxophone), Chris Gower (trombone), Dick Hanson (trumpet), and Ray Bevis (saxophone).

The band's first , "", was released to acclaim in 1976 and was rapidly followed by the stylistically similar "". A mixture of rock, ballads, and reggae-influenced numbers, these albums reflected Parker's early influences (, , , ) and contained the songs which formed the core of Parker's live shows -- "White Honey", "Soul Shoes", "Lady Doctor", "Fool's Gold", and his early signature tune "Don't Ask Me Questions", which hit the top 40 in the UK.

Parker and the Rumour built a reputation as incendiary live performers: the promotional album "Live at Marble Arch" was recorded at this time and shows off their raw onstage style. Like the pub rock scene he was loosely tied to, the singer's class-conscious lyrics and passionate vocals signaled a renewal of rock music as began to flower in Britain.

In terms of establishing a recording career in early 1976, Parker preceded two other "new wave" English singer-songwriters to whom he is often compared: and Joe Jackson. (Costello's first single was released in 1977, and Jackson's first solo single was issued in late 1978.)

Early in his career Parker's work was often compared favorably to Jackson's and Costello's. For decades afterwards journalists would continue to categorize them together, often labelling them with some variation of "Angry Young Men", even long after the artists' work had diverged. Characteristically, Parker would not hesitate to criticize this habit with caustic wit.

Critical acclaim for the first two albums was generally not matched with LP sales. Graham Parker and the Rumour appeared on television's "" in 1977, performing their version of ' "Hold Back the Night" from The Pink Parker EP, a top 30 UK hit in March 1977.

At this point, Parker began to change his songwriting style, reflecting his desire to break into the American market. The first fruits of this new direction appeared on "" (1977). The album broke the top 20 on the UK charts but divided critical opinions, particularly with numbers like "The Heat in Harlem" -- the band's longest song at the time. 's production also came under fire: some critics complained that the band sounded thin and Parker's voice was mixed down, when in fact a studio mishap had compromised the original recordings and forced the group to remake the album on short notice.

An official Graham Parker and The Rumour live album called "The Parkerilla", issued in 1978, saw Parker in a creative holding pattern. Three sides were live, with no new songs and with versions of previously released songs that added nothing to the prior studio cuts. Side four was devoted to a "disco" remake of "Don't Ask Me Questions". The 2-disc record was regarded by most as a ploy to fulfil Parker's contractual commitment to Mercury records, and as a ripoff for fans.

Parker had long been dissatisfied with the performance of his US record company, , finally issuing in the 1979 single "Mercury Poisoning", a public kiss-off reminiscent of the ' "EMI".

Energized by his new label, Arista, and the presence of legendary producer , Parker followed with "", widely held to be the best album of his career. For this album, The Rumour's brass section, prominent on all previous albums, was jettisoned, resulting in a spare, intense rock backing for some of Parker's most brilliant songs. Of particular note was "You Can't Be Too Strong", one of rock music's rare songs to confront the topic of , however ambivalently.

The jettisoned brass section, incidentally, would continue to play on other people's records credited as The Irish Horns (on the album "" by ) or The Rumour Brass, most notably on ' 1985 hit "Walking On Sunshine".

Bob Andrews left The Rumour in early 1980, and was not officially replaced. However, in studio sessions for the next album, and (of ) sat in on keyboards.

Although marginally less intense than its predecessor, 1980's "The Up Escalator" was Parker's highest-charting album in the UK and featured glossy production by Jimmy Iovine and guest vocals from . Significantly, the front cover of the album credited only Graham Parker, not "Graham Parker and The Rumour".

"The Up Escalator" would prove to be Parker's last album with the Rumour, although guitarist Brinsley Schwarz would reunite with Parker in 1983 and play on most of the singer's albums through the decade's end. As well, bassist Andrew Bodnar would rejoin Parker from 1988 through the mid-90s, and drummer would play on Parker's 2001 album "Deepcut To Nowhere".

The 1980s were Parker's most commercially successful years, with well-financed recordings and radio and video play. Over the decade, the British press turned unkind to him, but he continued to record and tour the world with top backing bands. His followup to "The Up Escalator", 1982's "Another Grey Area", featured noted session musicians Nicky Hopkins and in the backing band; this album charted at UK #40 and US #51, and spun off a top 40 UK single in "Temporary Beauty".

1983's "The Real Macaw", featuring drumming by of and the return of Brinsley Schwarz to the guitarist's spot didn't fare quite as well, hitting US #59 on the album charts but missing the UK charts altogether. However, Parker's 1985 release "Steady Nerves" (credited to Graham Parker and The Shot) was a moderate success and included his only US Top 40 hit, "Wake Up (Next to You)". The Shot was a four-piece backing band, all of whom had played on either "The Real Macaw" or "Another Grey Area": Brinsley Schwarz (guitar), George Small (keyboards), Kevin Jenkins (bass), and Michael Braun (drums).

"Steady Nerves" was recorded in New York City, and Parker began living mostly in the United States during this time.

An uncompromising attitude toward his music ensured that Parker would clash with the changing priorities of the music business, and the label changes came quickly after the mid-1980s. This situation partly accounts for the remarkable number of s in Graham Parker's discography. Particularly unproductive was Parker's tenure at , where he has said he was told to collaborate with other songwriters and to focus on "a big drum sound." Instead, Parker ended the deal (without releasing anything on Atlantic) and signed to . He began producing his own recordings and stripping down his sound with "", which gained him renewed critical attention and was a success in the new "" format. The backing band for this album included former Rumour-mates Brinsley Schwarz and ; keyboardists James Halliwell and ; and ex- and drummer (replaced on one cut by Andy Duncan, and two others by who, like Nieve, was a member of ). "Rolling Stone" magazine ranked "The Mona Lisa's Sister" at #97 on its list of .

Parker continued to record for RCA through the early 1990s, typically receiving critical praise but little in the way of chart success.Long-time guitarist Schwarz once again parted company with Parker after the well-reviewed 1990 album "Human Soul".

Parker's 1991 offering, "Struck By Lightning", had a slightly rootsier flavour than previous Parker releases, and featured bassist and Attractions' drummer in the backing band, as well as a guest appearance from The Band's on keyboards. However, the album's chart peak of US #131 wasn't enough to keep RCA happy, and Parker was dropped from the label.

He rebounded quickly. Parker, and were joined by keyboardist of , and this unit recorded 1992's "Burning Questions" for the US major label . Unfortunately, this record missed the charts completely, and once again Parker found himself label-less.

A 1994 Christmas-themed EP release ("Graham Parker's Christmas Cracker") was issued on Dakota Arts Records, before Parker found a more permanent home on American independent label . After the movingly personal "12 Haunted Episodes", and 1996's "Acid Bubblegum" (featuring of Blondie on keyboards), Parker grew quiet in the late 1990s. However he continued to play live fairly regularly, often working with backing band The (who, like The Rumour, when not backing Parker also issued records as a discrete unit).

Into the 21st century

Parker began an extraordinarily active period in 2001, with the UK rerelease of his early Rumour work, and with his third studio album for , "Deepcut to Nowhere", a penetrating collection of new songs that seemed intended to reflect comprehensively on the singer's life and aims. It also marked a reunion of sorts, as Parker recorded with ex-Rumour drummer Steve Goulding for the first time in 20 years.

In 2003, Parker collaborated with of the and to record an album of lesser-known / compositions that had never been recorded by . The album, called "From A Window: Lost Songs of Lennon & McCartney", was credited to "Pierson, Parker, Janovitz". Also in 2003, Parker contributed a solo acoustic version of 's to compilation album ""

New solo work continued with 2004's "", which saw Parker switch labels to Chicago-based indie . While presented as a flirtation with , "Your Country" had only marginally rootsier sound than Parker's norm. "Your Country" co-produced by John Would was recorded on 16 track 2" analogue tape at Stanley Recording of Venice, California. The album was recorded and mixed in two weeks.

Following in 2005 was "Songs Of No Consequence", an uptempo rock and roll collection quickly recorded with sometime backing band, the . A show from the ensuing tour with the Figgs broadcast on became a live album in 2006. In March of 2007, a new full-length, "Don't Tell Columbus" was released marking Parker's fourth album in three years. "Don't Tell Columbus" - though unfair to call a return to form - finds Graham Parker with some of his best songs in years, including the autobiographical "I Discovered America", where Parker proclaims about his lack of commercial success "everyone said quit, that's when I found hope."

In addition to his records, Parker published an illustrated novella, in 1980. He published a set of short stories, "Carp Fishing on Valium", in June 2000. His third book, a novel, "The Other Life of Brian", appeared in September 2003.