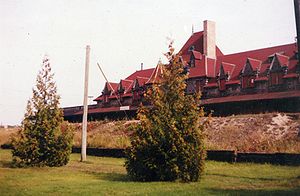 The McAdam Railway Station is a large railway station that dominates the village of McAdam, New Brunswick, Canada.

The station is the largest passenger station in the province but since the December 17, 1994 abandonment of Via Rail's Atlantic passenger train, it no longer sees rail service and is partially used as a museum.

McAdam's railway history is traced to the 1850s-1860s when the St. Andrews and Quebec Railway was built through the area on the way toward Woodstock using a survey from the 1840s when the International Boundary north of the St. Croix River was undecided and British North America stood a reasonable chance of acquiring title to the entire Saint John River watershed. The Aroostook War and the Webster-Ashburton Treaty settled the current boundary and eliminated any chance of the SA&Q building across that territory. McAdam was a small community called City Camp and comprised several lumber camps.

During the late 1860s, the European and North American Railway project's "Western Extension" was constructed from Saint John to the boundary at St. Croix where it linked with another E&NA line from Bangor to Vanceboro.

The junction at City Camp where the E&NA crossed the SA&Q (by then part of the New Brunswick and Canada Railway) was renamed McAdam and in 1883, the New Brunswick Railway (successor to the NB&C) took over the E&NA line, making McAdam an NBR junction.

In 1900, the CPR began construction of the massive combined railway station/hotel in McAdam to cater to wealthy passengers changing trains to continue to the resort town of St. Andrews where they would stay at the CPR's hotel The Algonquin. The station was commissioned by legendary CPR President Sir William Van Horne who maintained an exclusive private estate in St. Andrews on Minister's Island. On numerous occasions during Van Horne's influential presidency at the CPR during the 1890s, his private car would pass by the McAdam station on the way from Montreal to his summer retreat at St. Andrews and vice versa, sometimes staying in the station hotel.

The station was built in the Chateau style and resembles a Scottish castle. It was built of local granite and located at the western end of the wye leading to St. Andrews from the Montreal-Saint John main line.

The 20-room hotel occupies the two thirds of the second floor of the station. On the ground floor, the western end of the building's ground floor is occupied by a lunch counter/canteen with a large M shaped circular counter with swivel stools. This was largely where breakfasts would be served for hotel guests waiting for connecting trains and train passengers who were waiting for the Steam engines to be re-fuelled and passengers to clear Customs. It was no unusual to feed 2000 people a day at this lunch counter. The central portion of the ground floor has a more formal dining room and the kitchen area which served both eating establishments. The eastern end of the building's ground floor hosts the passenger waiting rooms and ticketing office and baggage storage rooms. The station also had a jail cell that was operated by the Canadian Pacific Railway Police Service.

In 1955, the CPR initiated an express service from Saint John to Montreal called The Atlantic Limited which was continued by Via Rail as the Atlantic with the eastern terminus shifted from Saint John to Halifax. Local connecting trains at McAdam to St. Andrews, St. Stephen, Fredericton and Woodstock were all cancelled in the early 1960s leaving McAdam with a single passenger train in each direction (The Atlantic Limited).

The CPR continued to use the station until 1978 when it transferred responsibility for its passenger rail service to federal Crown corporation Via Rail, however the hotel was closed in the early 1960s and used for office space for the railway. CPR maintained ownership of the building throughout Via Rail operations in McAdam from 1978–1981 and 1985-1994.

Via Rail cancelled the Atlantic, in 1981 leaving McAdam with no passenger service. This train was reinstated in 1985 but cut to tri-weekly in 1990 and cancelled completely on December 17, 1994, in light of CPR's Canadian Atlantic Railway subsidiary planning to abandon the entire railway from Saint John to Montreal.

The CPR sold its line through McAdam to the New Brunswick Southern Railway but the station has been vacant since Via Rail service was terminated in December 1994. The station was designated a protected heritage railway station by the federal government and the NBSR transferred ownership of the structure to the village of McAdam in the late 1990s. Since then, the village has undertaken fundraising and maintenance repairs to the structure and opened it during the summer months for tours.

The station is currently designated both a National and Provincial Historic Site.

Constructed of local granite by the Canadian Pacific Railway, this combined station/hotel in the Chateau style symbolizes the railway's significance to this community.