Highs in the Mid-Sixties, Volume 1

Highs in the Mid-Sixties, Volume 1 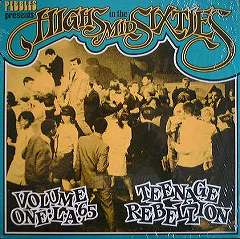 "Highs in the Mid-Sixties, Volume 1" (subtitled LA '65 / Teenage Rebellion) is a of American and recordings from the mid to late 1960s. It was the first in a series that is nearly as long as the earlier of similar music (for which the is a companion series), although the "Highs" albums concentrate strictly on particular regions of the US – in this case, recordings that were released in , . (Despite the subtitle, however, not all of these records were originally released in 1965).

were one of the best of the mid-sixties L.A. bands; this is a rare early track that was previously unreleased at this time. The flip side of "Linda" by is one of the most valuable and sought after garage rock songs, "I Never Loved Her", which was featured on the "Pebbles, Volume 8" LP and CD. have managed yet another take on the eternal "". are actually from but settled in L.A.; this song was later covered by . ' "So What!" was a featured song on "".