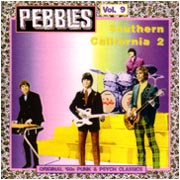 "Pebbles, Volume 9" is a among the CDs in the ; it is subtitled Southern California 2. The previous CD in the series, "Pebbles, Volume 8" also features bands from ; while "", "", and "" showcase music from specifically.

According to the liner notes, the track by had not been reissued before now; and this is probably the first-released version of the early Monkees hit "I'm Not Your Stepping Stone". One of the members of was , and this single is his earliest known release. are actually not from California but were a based band; while often mentioned as having heiress 's former boyfriend as a member, the band actually featured a different Steve Weed. [ [http://pnwbands.com/velvetillusions.html Velvet Illusions ] ] The final track is from an unreleased acetate by the band that is best known for "I Never Loved Her" (included on the "Pebbles, Volume 8" CD).