Communications and Networking Riser (CNR) is a slot found on certain PC motherboards and used for specialized networking, audio, and telephony equipment. A motherboard manufacturer can choose to provide audio, networking, or modem functionality in any combination on a CNR card. CNR slots were once commonly found on Pentium 4-class motherboards, but have since been phased out in favor of on-board or embedded components.

As with AMR, CNR had the cost savings potential for manufacturers by removing analog I/O components from the motherboard. This allowed the manufacturer to only certify with the U.S. Federal Communications Commission (FCC) for the CNR card, and not the entire motherboard. This resulted in a quicker production-to-market time for new motherboards, and allowed mass-production of CNR cards to be used on multiple motherboards.

The ACR slot was a competing specification developed by a group of third-party vendors. Its principal advantage over CNR was the backwards-compatible slot layout which allowed it to use both AMR and ACR cards. The same group also developed a physically smaller version, the MDC. 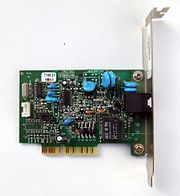 Intel developed the CNR slot to replace its own Audio/modem riser (AMR) technology, drawing on two distinct advantages over the AMR slot it replaced; CNR was both capable of being either software based (CPU-controlled) or hardware accelerated (dedicated ASIC), and was plug-and-play compatible. On some motherboards, a CNR slot replaced the last PCI slot, but most motherboard manufacturers engineered boards which allow the CNR and last PCI slot to share the same space.

As of 2007, with the integration of components such as Ethernet and audio into the motherboard, the CNR is obsolete, and is not found on the most recent full sized motherboards. It can still be found on smaller form-factor motherboards (like microATX) with lower end processors, where it continues to perform its original function.